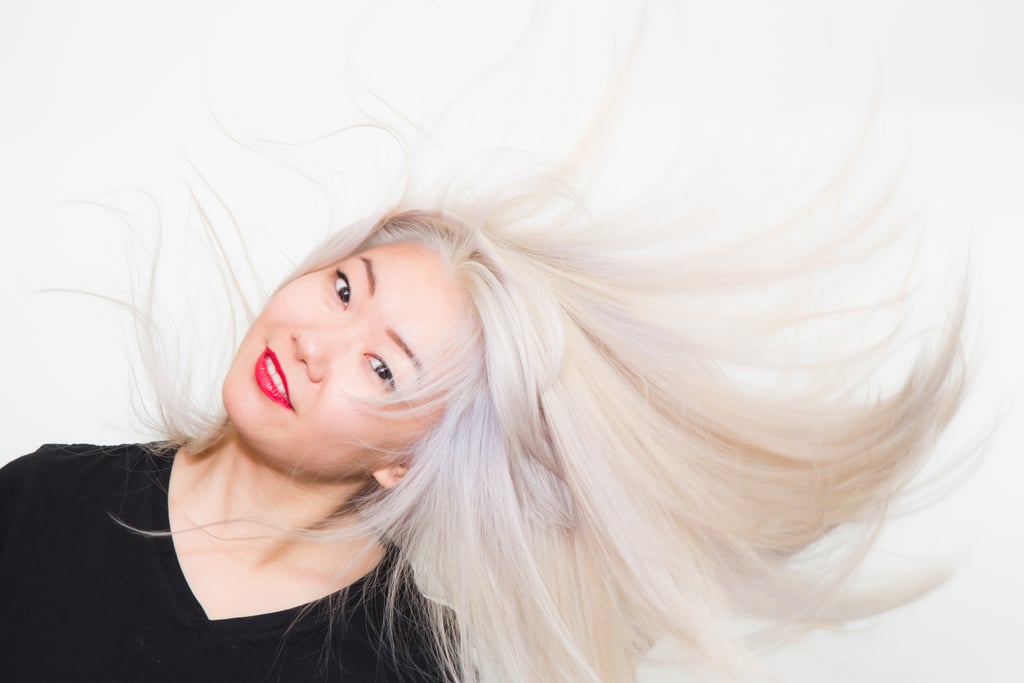 Everything You'll Ever Need to Know About Going Platinum Blond

The night before my first appointment at Sally Hershberger Downtown, I examined my dark mane closer than I ever have in all my years as an Asian (that's a lot of years). The way the small lamp on my nightstand bounced off my crown, creating a half-circle glow that starkly contrasted with my black hair, like a halo above my visage, almost moved me to tears. Was I getting cold feet? Maybe. Was I being dramatic? If you say so. But what was certain was that I was going to miss my natural hair color. We'd never been apart from each other before (aside from a failed at-home bleaching attempt at age 13), not even for a Clairol Summer fling.

Luckily, the trepidatious moment was fleeting and I quickly remembered my mission. I was going to become a completely different person the next day. Tomorrow, I would start my two-session transformation from a regular ol' Asian to a platinum blond one, which, barring cosmetic surgery, is probably the most dramatic change an Asian girl can make. Sure, only my hair was being overhauled, but it does make up about 40 percent of me.

Since childhood, I've marveled at the likes of Debbie Harry, then Courtney Love, followed by perennial platinum Gwen Stefani, and most recently Sky Ferreira. I've been coveting their punk-inspired, white-blond manes as something I could only ever dream about, but never have. But as hair technology continued to advance, something miraculous happened: Asian women, who for the most part had only been able to go orange, started to go platinum successfully.

Models Soo Joo Park, Ai Tominaga, and Daul Kim (RIP) set a new bar in the fashion industry by going platinum. Fashion host Amy Pham helped introduce the look to a more mainstream audience, and now throngs of regular Asian girls who had similar dreams of experiencing the yin to their hair yang are following suit. And I was next in line. As quickly as it came, my apprehension evaporated and once again I was eager to finally fulfill a lifelong dream. Only one more night of sleep stood in my way.

Having said all that, going from black to platinum is no joke. It is a serious process. When I met with my brilliant, sweet, devastatingly handsome colorist, Daniel Sanchez (who has worked on Karlie Kloss's mane) at Sally Hershberger for our consultation, he immediately assessed that making my hair platinum would take two sessions and at least eight hours.

After experiencing what ended up being 15 hours total in the salon chair, I can say with confidence that the longer the process, the better the results. Unless you want your hair to go into shock and become straw or, even worse, fall out in clumps, you'll want your colorist to take his or her time and go as gently as possible on your strands. So, armed with my cell phone charger and a pantry of snacks (crackers, pretzels, hummus, beef jerky, and Kind bars), I ventured to Sally Hershberger the next day poised and ready to go platinum.

If you, too, are considering stepping into the light, but are still trepidatious of the process, keep reading to discover exactly what to expect during a black-to-platinum hair color transformation.