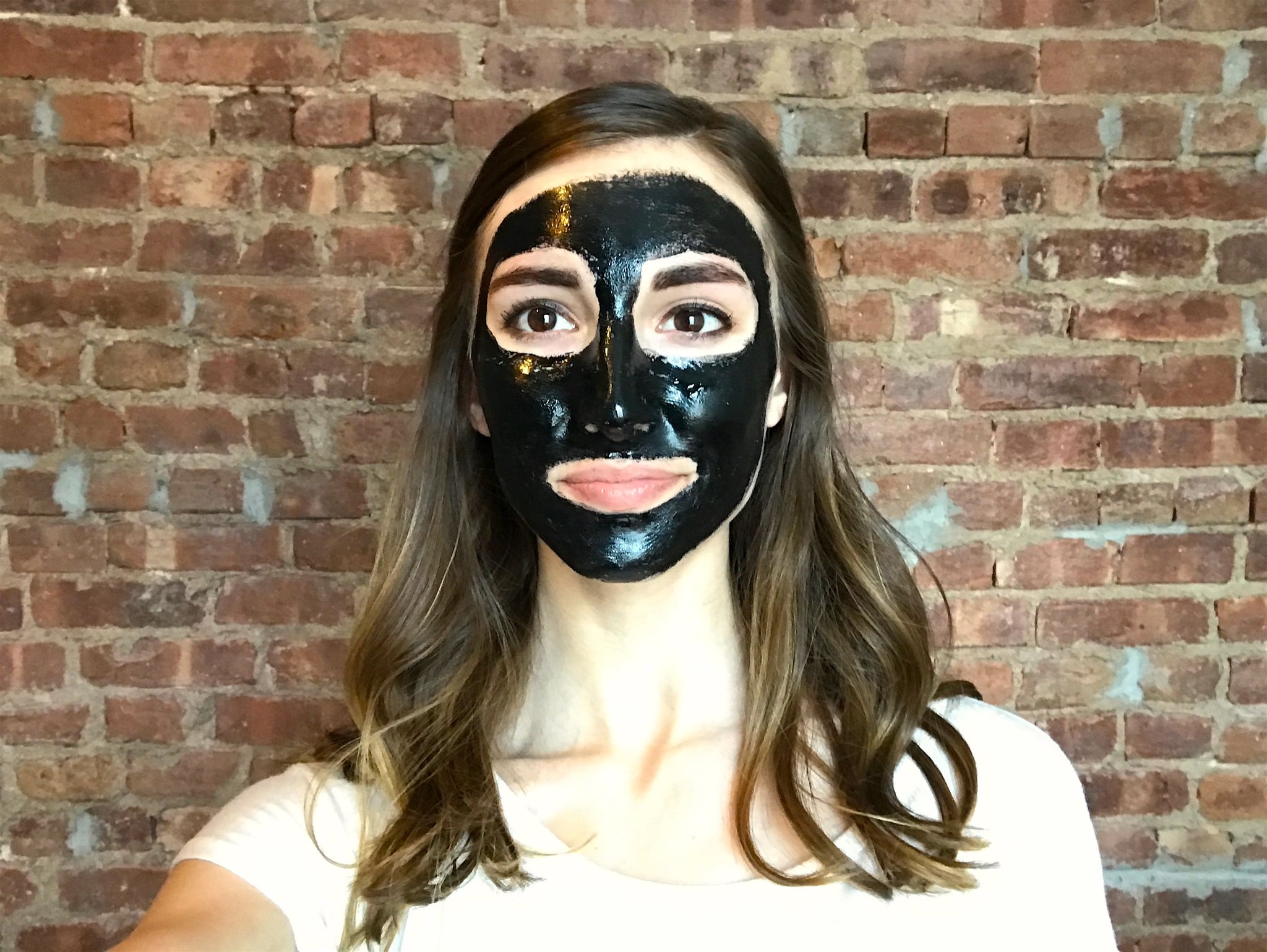 If you've been on social media anytime in the past few months, chances are you've come across a monsoon-like flood of Instagram advertisements and YouTube reviews for the Shills Black Peel-Off Face Mask. The product has earned viral fame and developed a cult-like following of beauty mavens who praise its ability to banish blackheads with just one use. This skin-purifying mask promises to unclog pores of their impurities, leaving your face feeling smooth, exfoliated, and most importantly, blackhead-free. Sounds pretty glorious, right?

As soon as I stumbled upon an ad about the Shills mask, so many questions came to mind. Does it actually work? How long does it take to show results? And on a scale of 1-10, how bad will it hurt? So I scoured YouTube to see what vloggers had to say about it, and it turned out the reviews were pretty evenly divided. Some admitted it was extremely painful and even caused a little inflammation, while others raved of its pore-cleansing effects and even featured up-close footage of their blackheads getting stripped of dirt and grime as the mask got ripped off.

It's those zoomed-in shots of the pore-stripping action that really drew me in.

I'm not gonna lie: it's those zoomed-in shots of the pore-stripping action that really drew me in. There's something so oddly satisfying about watching it, kind of like seeing Dr. Pimple Popper's blackhead-blasting adventures. (I know, I know; I'm weird.) My curiosity eventually got the best of me, so I decided to take one for the team and try the mask myself (naturally documenting my journey with a plethora of obnoxious selfies and Boomerangs, of course).

I have to preface things by honestly admitting I've been blessed with pretty decent skin. It's by no means a blackhead haven, but I do have tons of pesky clogged pores mostly concentrated around my nose that I've been itching to get rid of (and that I usually resort to squeezing out with my fingertips, despite my mom's best efforts to advise against doing so).

Before you sacrifice your precious pores and hop on the bandwagon, read on for the 11 tips and tidbits you need to know about the infamous Shills mask.

1. There appears to be two different Shills products on the market that people are mixing up

Shills isn't exactly a drugstore mainstay, so many of the brand's products are sold on Amazon. I ended up purchasing mine through a semi-sketchy website (see tip No. 2 for more details on that) and soon realized there are two different black peel-off masks that people are interchanging. 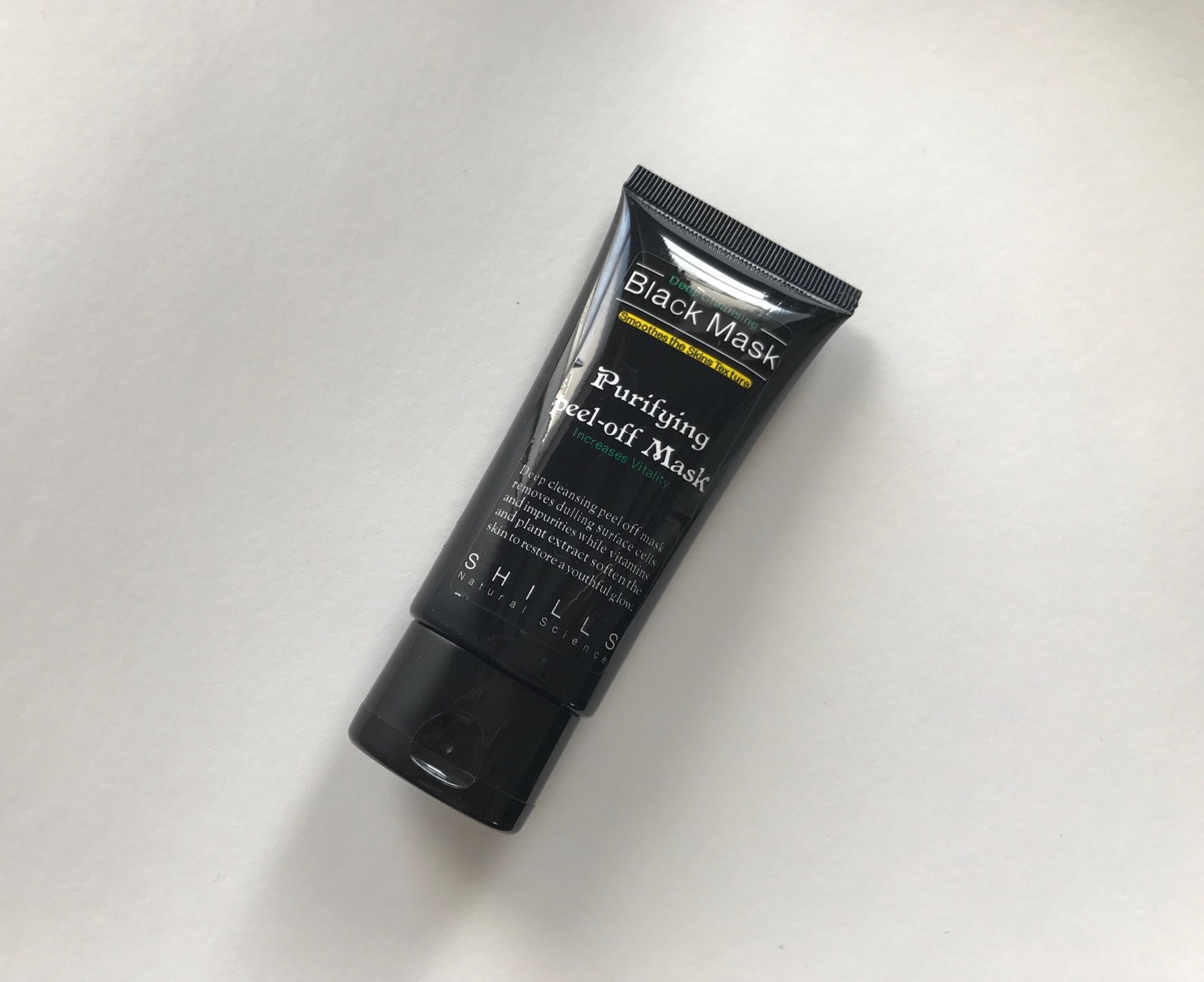 Being the millennial consumer I am, I simply couldn't resist clicking on an ad for the product on Instagram (especially when I saw the word "free" involved in the promotion). That ad took me to a website, which was offering the product for free (plus shipping costs). I paid $13 for it at the time — though the price appears to fluctuate daily because of the high demand. Purchasing it through a random website I'd never heard of was a rookie mistake on my end, because I had to wait three weeks for it to arrive, and when it did arrive, the packaging was pretty beat up. I suggest buying it from Walmart or Amazon, both of which offer quicker shipping times, if you're dying to try it ASAP. 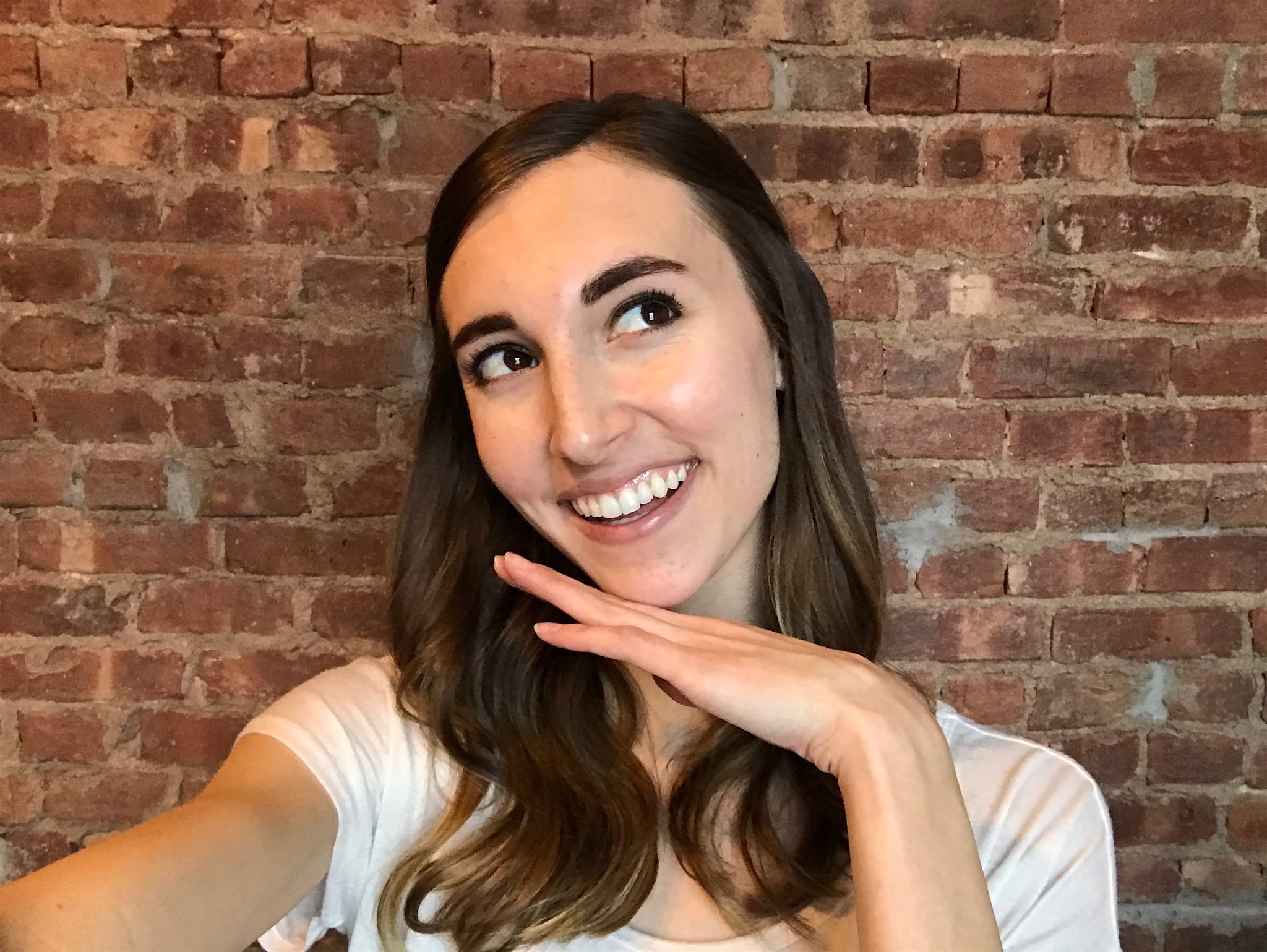 Channeling some hopeful vibes before applying my face mask.

3. Apply the mask using a brush, not your fingertips

Whereas some gals on YouTube excitedly slathered on the goopy liquid with their fingers, others opted for using a makeup brush to do so. This resulted in much cleaner, accurate coverage. I went for a basic foundation brush from the local drugstore and found that I was able to properly cover my face. It also helped me to get in those hard-to-reach spots (like between my eyebrows, near my nostrils, and by my hairline). A soft, semi-tapered foundation brush is definitely the way to go, rather than a large powder brush.

Another upside of using a brush to apply the Shills mask? I didn't have to deal with furiously scrubbing my fingers to get any of the black color off afterward because the brush took the fall instead. I simply dabbed on some dish soap, rubbed it on my silicone brush cleaner, and voila! My brush was good as new again.

4. On that note, apply it very carefully — yet quickly

I'm admittedly a tad of a perfectionist, so I wanted to apply my mask evenly to allow for the best selfies possible (yes, I know that was painfully millennial of me to say). But I realized that the liquid starts to dry pretty quickly, so you have to move fast when slathering it on. That doesn't mean sloppiness is welcomed, as getting that full coverage is what you should be going for. Just make sure you get yourself in ninja-mask-applying mode beforehand.

5. If you do mess something up, I've got the perfect solution

A few times during application, I accidentally veered my brush too closely to my eyebrows and hairline (both of which should 100 percent be avoided). In a moment of panic, I glanced over at the Q-tips in my bathroom and the imaginary lightbulb illuminated above my head. A damp cotton swab was the ideal tiny tool for easily wiping away excess mask goop before it was too late. Note: This is a helpful hack you can use with any face mask, not just the Shills one!

I was honestly a bit surprised at just how thick the liquid mask is when I first applied it to my face. I assumed I'd need to smear on a few layers, but all I needed was one coat of it, and I was good to go. Now you know!

7. Set aside nearly 30 minutes for it to dry

The packaging advised leaving the mask for 20-30 minutes before getting down to peeling business. I set a timer for 25 minutes and found that to be the perfect sweet spot. By then, the mask was evenly hardened all around, whereas if I had started peeling away around the 20-minute mark, a few patches where I applied it in a slightly thicker coating wouldn't have been ready.

8. Take a deep breath before peeling — and prepare for some pain

I suggest treating it like a bandage in that area — just rip it as quick as possible to get it over with.

One of the major caveats for this mask is just how painful it is to remove. Although I think this aspect has been a tad overhyped all over the internet, I can confirm that it hurt pretty freakin' bad. On a scale of 1-10 (10 being the worst), I'd give it a solid eight. By far the most painful area for removing the mask was near my eyes. I'll just go ahead and admit that unintentional tears may or may not have rolled down my face while ripping it off my skin. I suggest treating it like a bandage in that area — just pull it as quick (and carefully!) as possible to get it over with.

9. It didn't actually remove any of my blackheads

Lots of happy customers have walked away from their black mask experience with clean, unclogged pores, so I hoped for those results going into it. But I was pretty darn disappointed when I peered at my reflection only to see the same little dots all around my t-zone. (Maybe I should've played "Mask Off" while peeling it to summon Future's magical powers for good measure? Hah, kidding.) The mask did, however, have an unexpected result: It ripped away some of my "peach fuzz" and a few hairs from my upper lip, which you can slightly see in the photo below. So it was basically like a two-in-one facial wax...that I didn't exactly ask for. 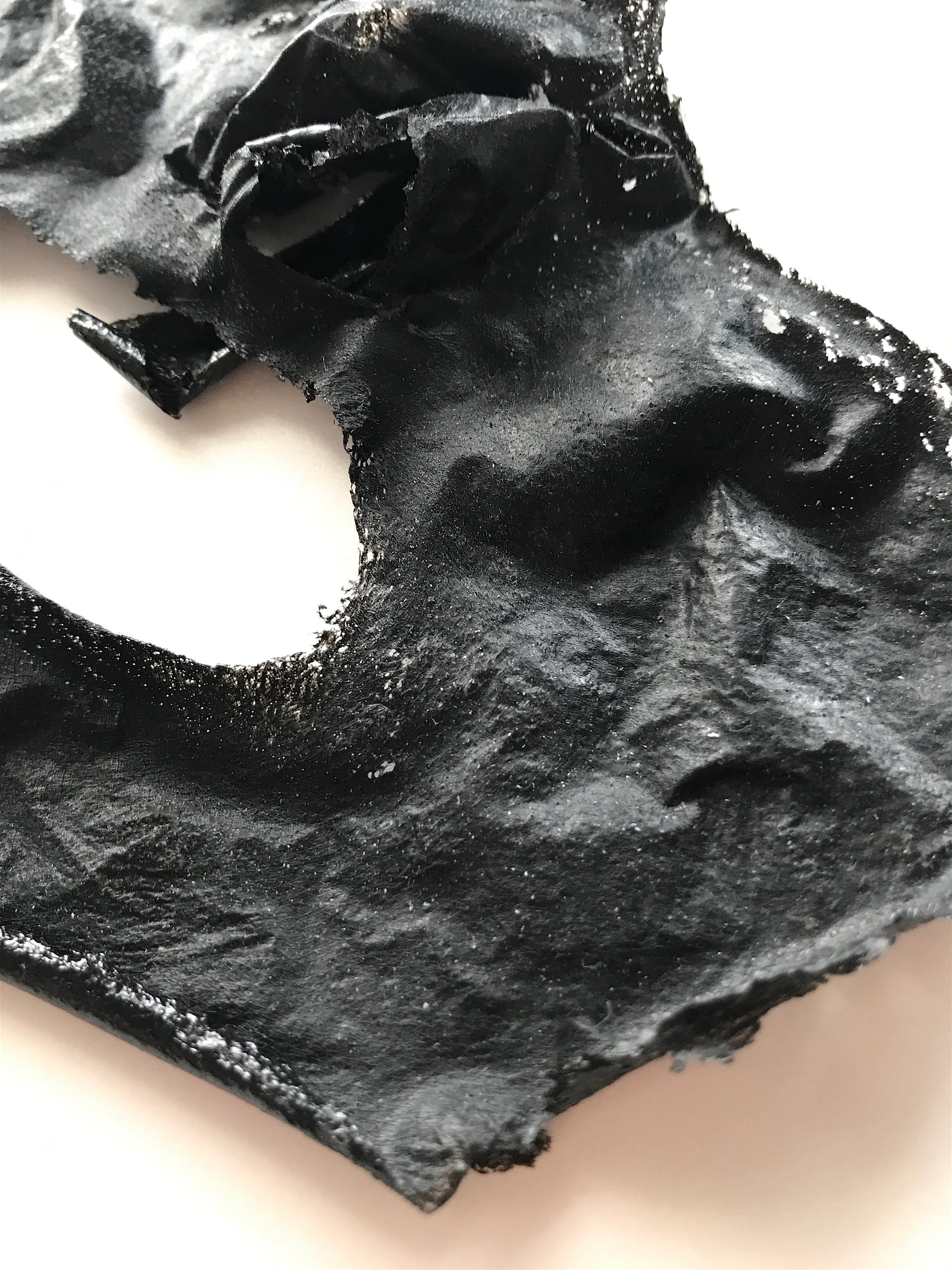 Many of the tiny white dots on the mask were itty-bitty peach-fuzz hairs.

10. If you have sensitive skin, you may want to avoid this one

Like I said before, I prepped for the big day by binge-watching YouTube reviews of the Shills mask. One of the videos featured two fair-skinned gals whose faces were beet red in the aftermath. Personally, my face (mainly my cheeks) was red for about two hours after I removed it, and my skin felt all tingly for about 30 minutes after peeling it off. I'm no skin expert, but if yours is notably sensitive or prone to inflammation and flare-ups, I think it's probably best to skip out on the Shills hype. Something a little more mild may be more your style. 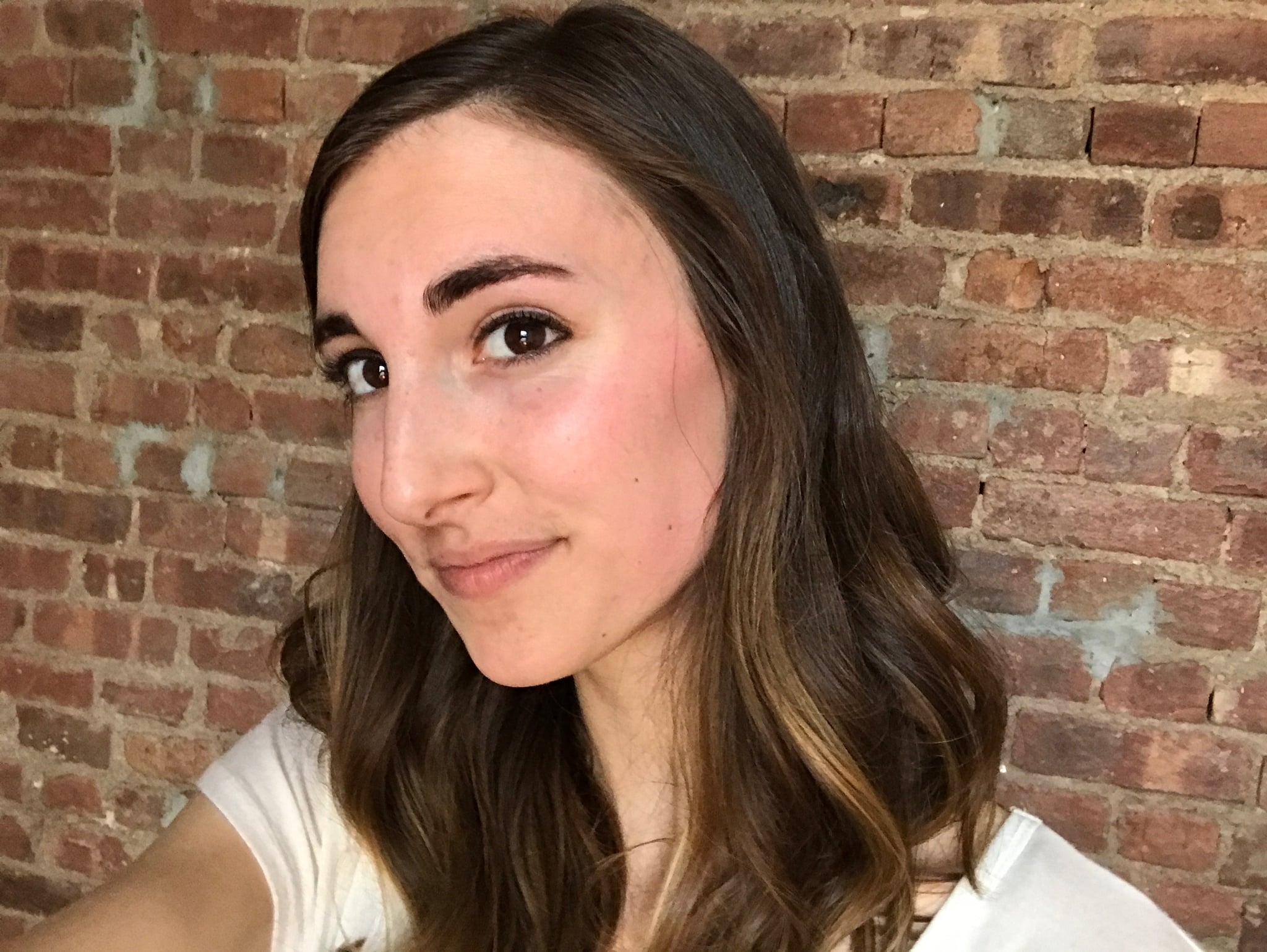 Me and my rosy cheeks.

11. A few post-mask tips you need to know

All in all, the mask came off my face pretty seamlessly, mostly in two large pieces. There were a few remaining pieces stuck on near my hairline, which I suggest removing with a damp washcloth. The product's packaging advises following up your peel-off session with some toner to "tighten and cleanse the pores." Although my pores weren't exactly empty caverns by the end of it, I still applied toner for good measure, and it really soothed my slightly aching skin.

Although I'm glad I finally quenched my undying curiosity over this mask once and for all, it definitely wasn't as effective as I hoped it would be. At the end of the day, I wouldn't recommend succumbing to the hype — unless you're looking for a quick way to get rid of peach fuzz sans a razor, that is. Onward to my next face mask adventure!