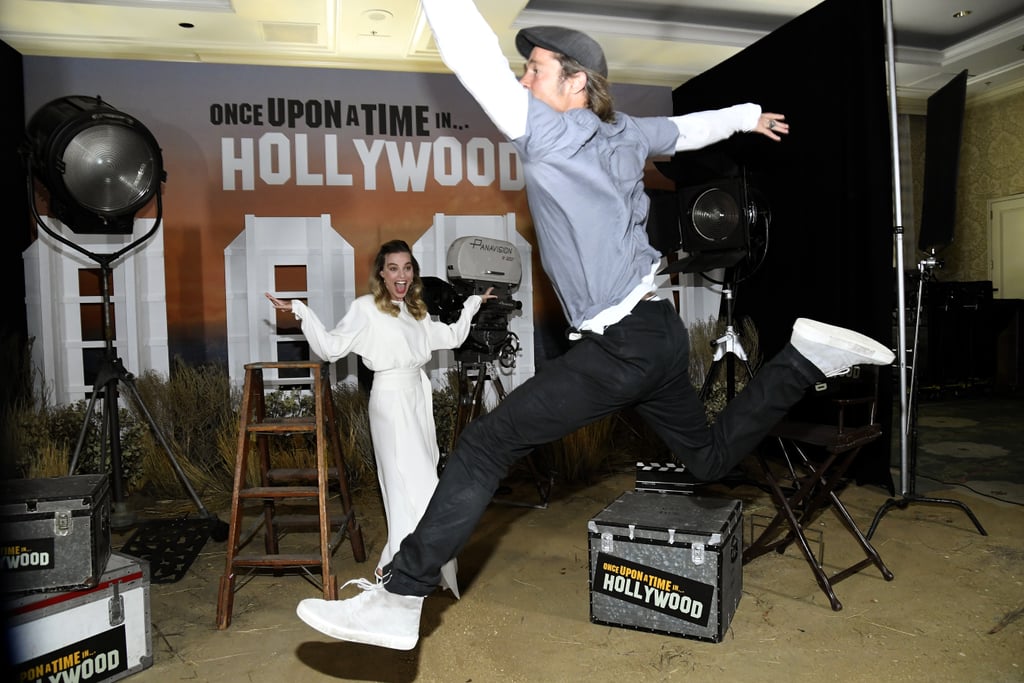 Brad Pitt, Leonardo DiCaprio, and Margot Robbie have officially begun promoting their upcoming film, Once Upon a Time in Hollywood, and things look to be off to a fun start. On Thursday, the trio linked up with director Quentin Tarantino for a photocall at the Four Seasons Hotel in LA, where they posed for pictures on a makeshift movie set. At least, Margot sure tried to pose for photos on a makeshift movie set, but her costar had other ideas. Brad was seen flying through the air (with the greatest of ease!) while the actress — who portrays Sharon Tate in the film — laughed in the background. For the record, Leo wasn't safe from a photobomb from Mr. Pitt, either.

Once Upon a Time in Hollywood follows a TV actor (DiCaprio) and his stunt double (Pitt) as they navigate Los Angeles during the infamous Manson Family murders in August 1969. "It takes place at the height of the counter-culture explosion, at the height of the hippie revolution, and at the height of a new Hollywood," Quentin Tarantino explained. Keep reading to see Brad's impressive photobombing efforts, and stay tuned for more fun promo moments ahead of OUATIH's July 26 release.

Related:
Brad Pitt and Leonardo DiCaprio Looked So Handsome at Cannes, It's Almost Disturbing
Previous Next Start Slideshow
Join the conversation
Once Upon A Time In HollywoodQuentin TarantinoMargot RobbieLeonardo DiCaprioBrad Pitt
Latest Celebrity and Entertainment