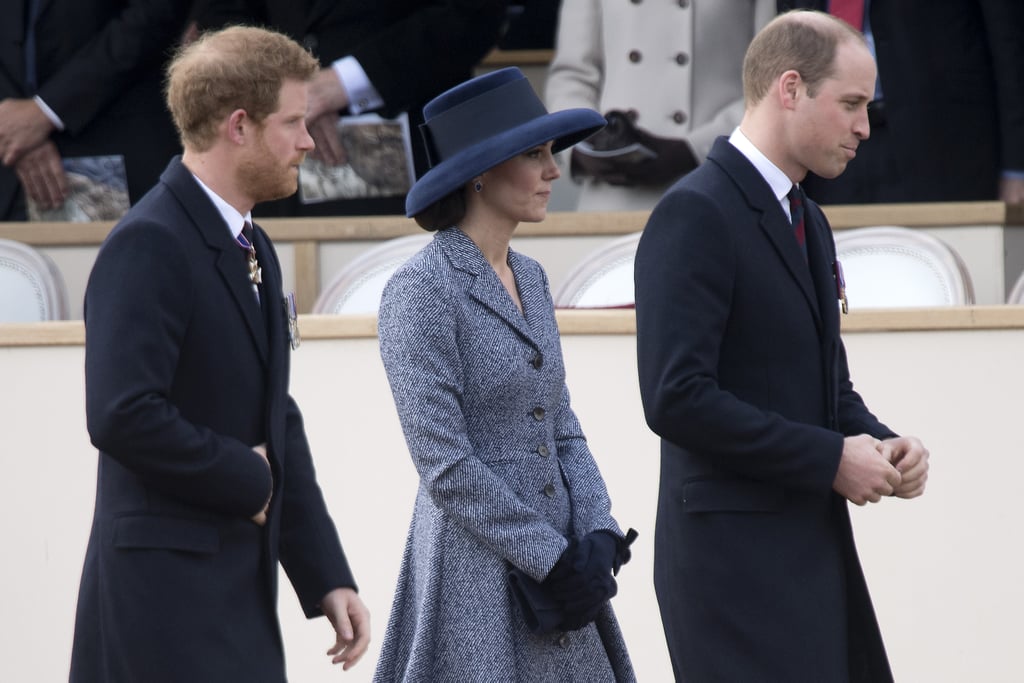 The dedication service of the Iraq and Afghanistan memorial at London's Horse Guards Parade drew quite a crowd. Kate Middleton, Prince William, and Prince Harry (are we the only ones who hear "the three best friends that anybody could have" song whenever they are together?) arrived at the event, and were followed by Prince Charles, Prince Philip, and Queen Elizabeth II. After sitting in the stands for the service, the royal family made their way inside, where Harry (who was sadly wearing a shirt this time around) shared a laugh with members of the military, and William and Kate mingled with veterans and other guests. The queen, who was recently the topic of a very surprising study, also chatted with a few people, and later shared an especially sweet moment with one of her youngest royal subjects.

Kate also had a special "mummy chat" at the event, where she confirmed something the world basically already knew to be true: Kate and William's daughter, Princess Charlotte, is the real head of the family. Samantha Burge, the wife of a Royal Marine commando and mother of two, said that the Duchess of Cambridge told her that "Charlotte is growing up really fast. She is the one in charge," adding that George and Charlotte are "becoming really good friends."

On top of the royals, attendees of the service included Jeremy Corbyn, Nicola Sturgeon, Teresa May, Michael Fallon, Boris Johnson, Phillip Hammond, and Sophie, Countess of Wessex. It's just the latest high-profile event that the royal family has popped up at. Queen Elizabeth II's launch of the UK-India Year of Culture drew quite a crowd, and Kate and William hit the red carpet at the BAFTAs. Up next for them? The Duke and Duchess have a trip to Paris in the works.