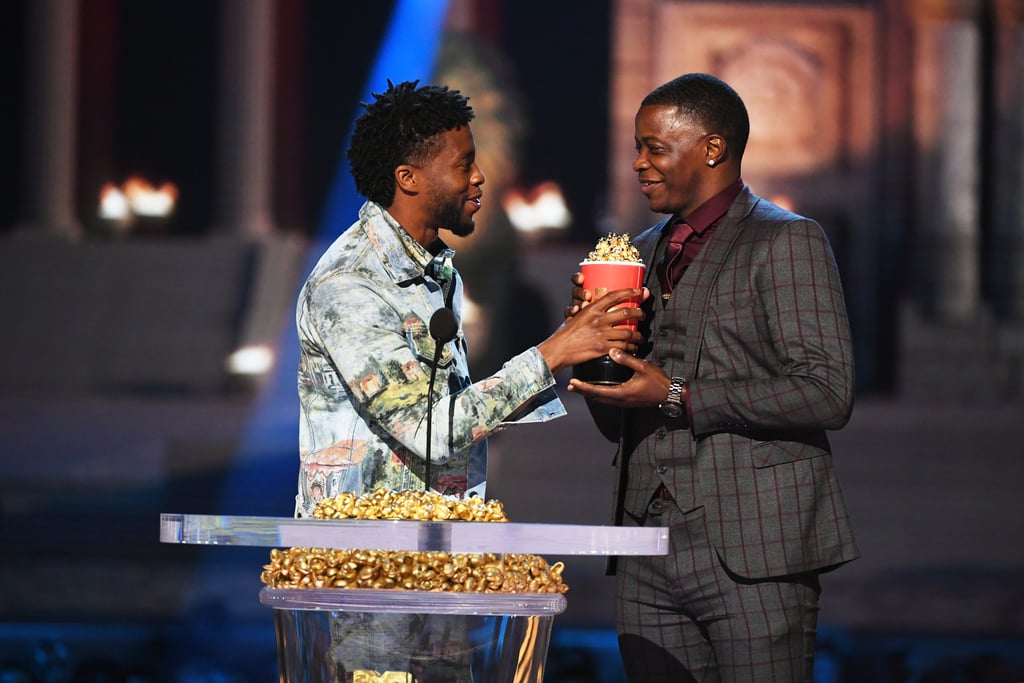 When Black Panther star Chadwick Boseman accepted the award for best hero at this year's MTV Movie & TV Awards, he took the opportunity to share his award with a "real-life" hero instead. "Receiving an award for playing a superhero is amazing, but it's even greater to acknowledge the heroes that we have in real life," he said. "I just want to acknowledge somebody that's here today: James Shaw Jr. If you don't know James Shaw Jr., he fought off a gunman in Antioch, TN, at a Waffle House. He saved lives." The actor surprised James by inviting him on stage, and he got emotional as he held up his award and told James, "This is going to live at your house."

James Shaw Jr. made headlines earlier this year when he rushed a shooter at a Waffle House, intervening after shots were fired to save lives. At a press conference following the shooting, he insisted he wasn't a hero. "I'm just a regular person," he said. "You have to either react or you're going to fold, and I chose to react because I didn't see any other way of living, and that's all I wanted to do. I just wanted to live."

Following the MTV Movie & TV Awards, Chadwick took to Twitter to acknowledge James again. "I was honored to meet @JamesShawJr9. He saved countless lives by tackling a gunman who opened fire on people in Antioch, Tennessee in April," he wrote, adding, "He's a true hero that walks among us." Keep reading to watch the touching moment, then see more snaps of the Black Panther cast's special night.