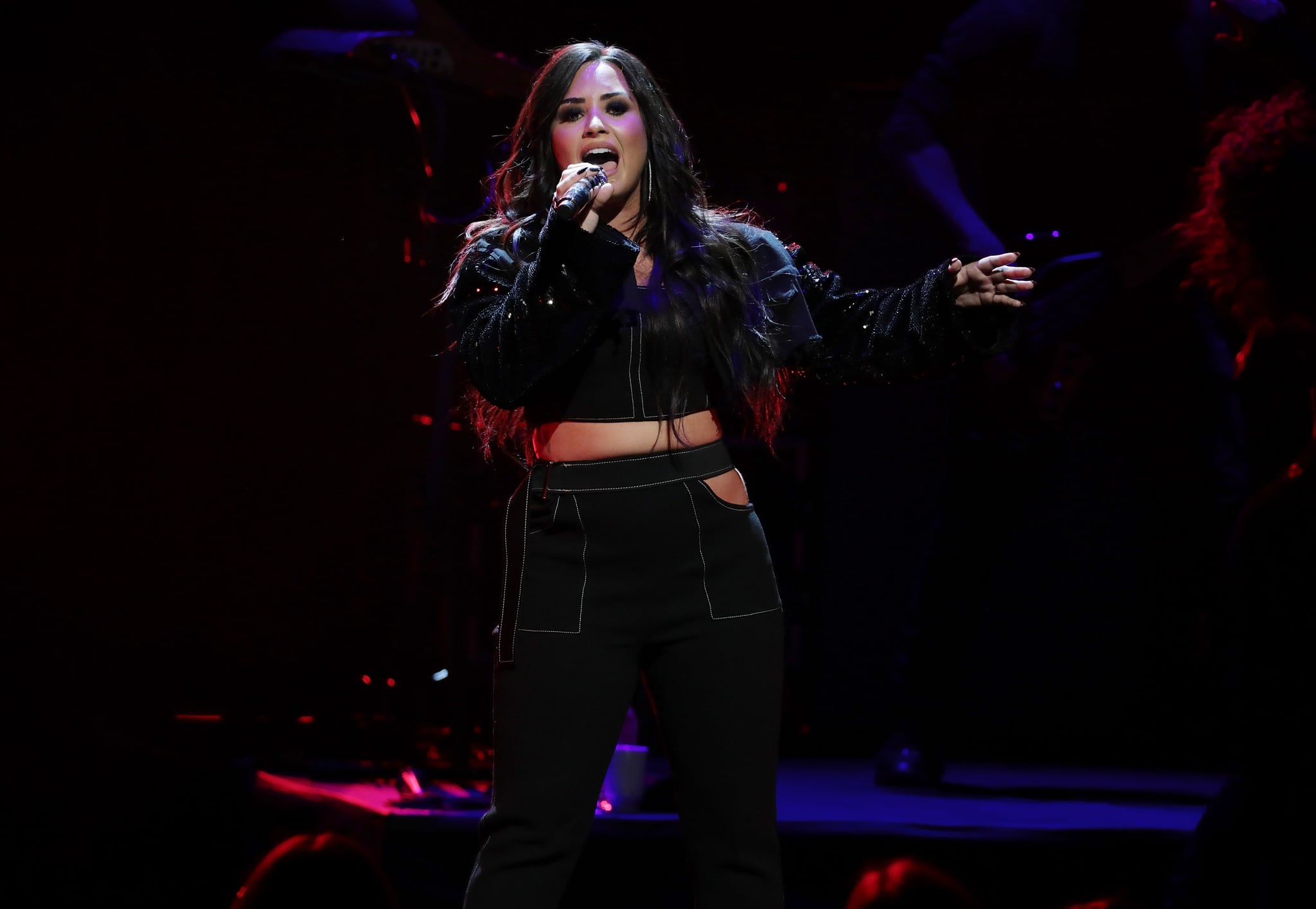 From the second those bold, in-your-face horn blasts opened Demi Lovato's "Confident" in 2015, we were let in on one not-so-secret: she was done messing around.

After years spent privately, and later publicly, struggling with addiction, self harm, and mental illness, Demi's fifth studio album, the aptly named Confident, ushered in a new, self-assured era for the pop star. By opening up to fans about the ups and downs she'd faced in her personal life, she was finally able to reclaim her narrative. Since then, despite navigating a high-profile breakup and body image problems, Demi has only gotten stronger and more assertive. More than that, she's emerged as one of Hollywood's most inspirational, body positive icons; a down-to-earth champion for the well-being of each and every one of her fans.

With her sixth album out — Tell Me You Love Me, which features her most stunning vocal work to date — Demi is about to embark on a 20-date North American tour alongside DJ Khaled. In fact, an emphasis on destigmatizing mental health will be at the center of each tour date. The 25-year-old singer recently revealed that her tour will feature pre-show therapy sessions hosted by CAST Centers — an addiction treatment center that Demi co-owns with personal development coach Mike Bayer.

Before she kicks off the show in San Diego in February, however, we got a chance to sit down with the multi-hyphenate at one of her exclusive American Airlines and Mastercard concert experiences at New York City Center. From her favorite self-love mantra to how she got Jesse Williams to star in her "Tell Me You Love Me" video, Demi didn't hold back.

POPSUGAR: These concerts that you're doing with Mastercard must be special to you since they're in much smaller venues than you usually play.

Demi Lovato: Yeah, it was an easy yes. I travel a lot, so Mastercard partnering with American Airlines is awesome. I think that it just aligns perfectly, especially with the shows. You know, getting to perform in an intimate setting is something that I don't get to do very often, so I love doing it for my fans.

PS: Speaking of your fans, it's been really interesting to see how your core fan base has literally grown up with you over these past few years. To them, you're not so much a perfect, shiny role model, but more of this open, honest force in their lives. How would you describe your relationship with them?

DL: My relationship with my fans is honest, real, and open. You know, I have fans tell me things that they don't tell anybody else in meet-and-greets, and then I tell my fans things that are very personal to me. So, it's kind of like this mutual honesty that we have together, which is beautiful.

PS: Is that what made you want to do the CAST workshops at your concerts on the upcoming tour?

DL: Yeah, definitely. I hope they get inspiration out of them. Hopefully they'll be inspired by the stories they hear.

PS: So I'm not sure if poster child is the right word, but you've really become this icon for self-acceptance and body positivity over the last few years. But say you have a day when you're feeling insecure, what's something that you can turn to to lift your spirits? Or a personal mantra that makes you feel better and gives you a mental health boost?

DL: There are a lot of mantras that work for me. Any time you talk to yourself in a loving way, or just catch yourself when you start to say something negative about yourself — that's helpful. But also what helps me is I make sure that I take care of myself. So if I'm feeling insecure, I still work out. I still go eat my meals. I still reach out to people and tell them that, "Hey, I'm struggling. I need extra support today."

PS: Is it easier to be in that mindset when you know you've built such a strong network of support with your fans? Does it make you feel braver than you might usually?

DL: I think the fact that I have millions of people that are supportive of the decisions that I make makes me feel brave. They're like . . . I've got little ride-or-dies, and they're always supportive. I think that gives me courage to make decisions and speak up for the things I believe in.

PS: What has been the most meaningful fan interaction that you've had recently?

DL: Any time a fan says that I've saved their life, it's really meaningful. I can't think of any specific moments right now. I've actually been kind of away for the holidays, and not really been able to see my fans because I've just been working. But getting to perform in front of them brings me closer to them, so I'll be seeing them more on tour. But any time somebody says that I've saved their life, it, it means a lot. 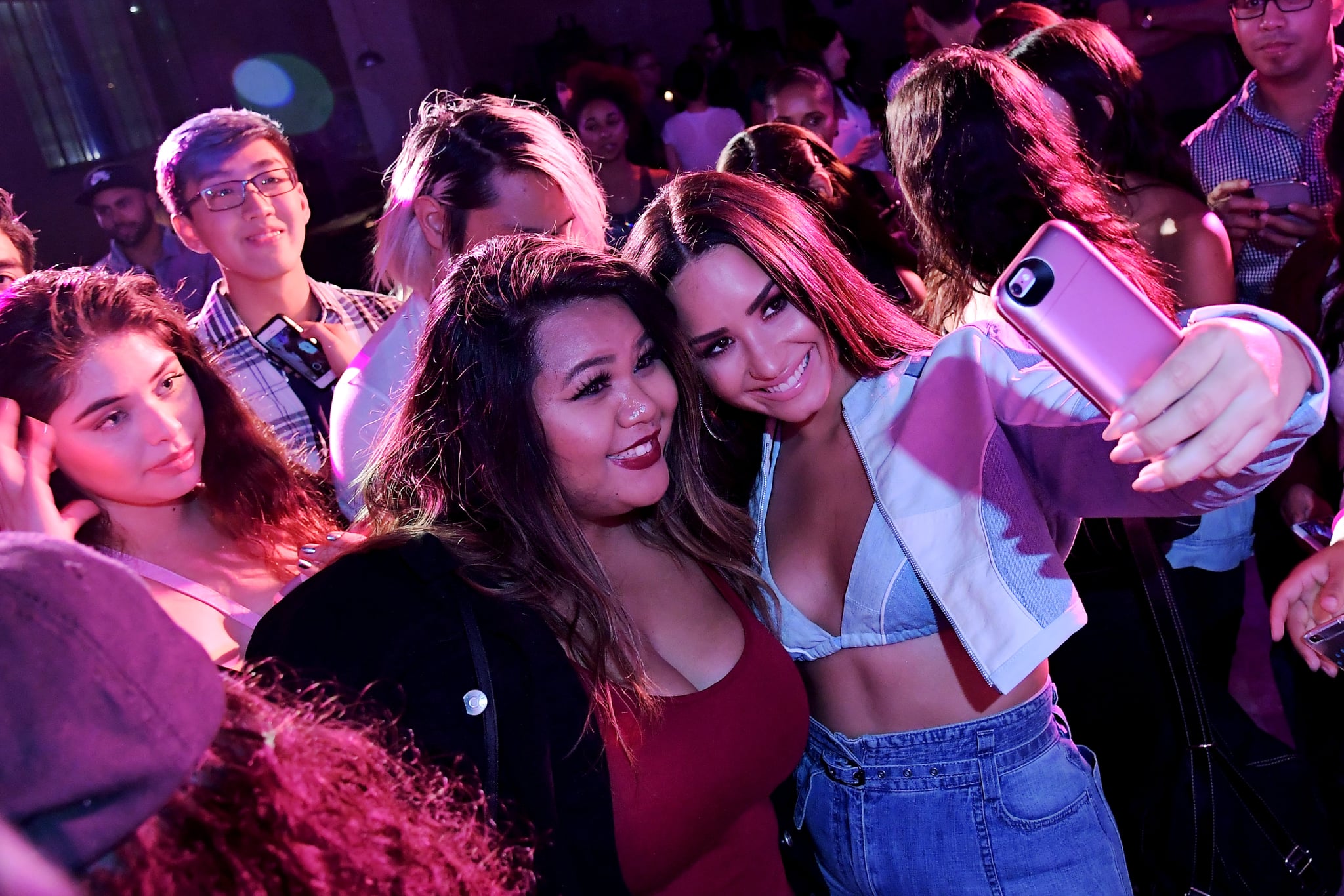 PS: When you were on Good Morning America, you mentioned that you want to use your voice for more than just singing — you want to inspire people. So, where do you see your career heading in, say, the next five years? Do you want to keep focusing on music? Do you want to focus even more on raising awareness for mental health?

DL: I want to do both. Music is very important to me. I want to get back into acting at some point, too. And hopefully I'll be starting a family in five years, but you never know! Life never goes according to plan. We'll see what happens. I may just be a dog lady and be working on my tenth album. [Laughs]

PS: What kind of acting would you want to do?

DL: Anything. I think it just depends on what they'll allow me to play with all my tattoos.

PS: Well we kind of got a taste of you acting in the "Tell Me You Love Me" video, which was so fun and cinematic, like a mini-movie. Can you tell me a little bit about how you came to cast Jesse Williams as your leading man?

DL: So [my friend] was actually like, "You should cast one of those hot doctors from Grey's Anatomy." [Laughs] And I was like, "Well, I'm gonna go for the hottest one, and I'm gonna go for Jesse."

PS: He ended up being the perfect costar. What was the inspiration for that video?

DL: We were just throwing ideas around, me and my management team, trying to brainstorm. Like, what is the song about? And to me, it's about a tumultuous . . . well, we wanted to show a tumultuous relationship. It's the ups-and-downs, the roller coaster of love and the emotions. It's also very vulnerable, so I wanted to think, "What's more vulnerable than getting stood up at the altar?"

PS: If there is one song on Tell Me You Love Me that encapsulates your mood lately, what would it be?

DL: "Tell Me You Love Me," probably. Just because it's a vulnerable song. I'm feeling a little vulnerable today. I would like to like to hear that someone loves me, you know?

Lovatics will get to tell Demi they love her in person when her tour begins in San Diego on Feb. 26, following a second exclusive concert with American Airlines AAdvantage® Mastercard credit card holders in Dallas at the House of Blues on Feb. 9.