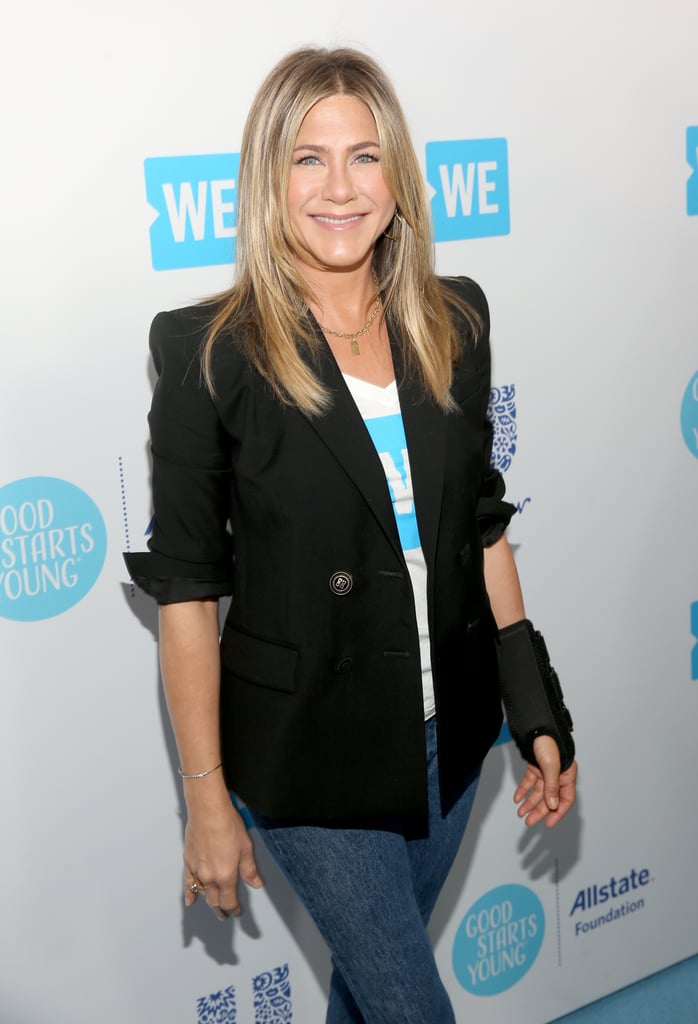 Jennifer Aniston was a ray of sunshine when she stepped out for WE Day in LA on Thursday afternoon. Clad in jeans and a black blazer, Jennifer was all smiles as she posed on the red carpet, despite her arm brace. The star-studded event honored young people making a difference in their local and global communities and brought out celebrities like Nicole Richie, Selena Gomez, John Stamos, and Morgan Freeman. The event was also special because it marked Jennifer's first red carpet appearance since she and Justin Theroux announced their separation.

Back in February, Jennifer and Justin released a joint statement through her rep, saying that their decision to split after two years of marriage "was mutual and lovingly made at the end of last year." Since then, Jennifer has been leaning on her friends for support. In March, she was spotted leaving BFF Courteney Cox's Beverly Hills home, she supported pal Jason Bateman at the premiere of Game Night, and she also helped Jimmy Kimmel's wife, Molly McNearney, ring in her 40th birthday. Over the weekend, she got all glammed up for Gwyneth Paltrow and Brad Falchuk's engagement party.

Oh, and if you're wondering how Justin has been since their split, he seems to be doing just fine. Just last week, he was photographed hanging out with a beautiful mystery woman in NYC.

Related:
What Went Wrong? Everything We Know So Far About Jennifer Aniston and Justin Theroux's Split
Previous Next Start Slideshow
Join the conversation
Jennifer AnistonRed Carpet
Latest Celebrity and Entertainment