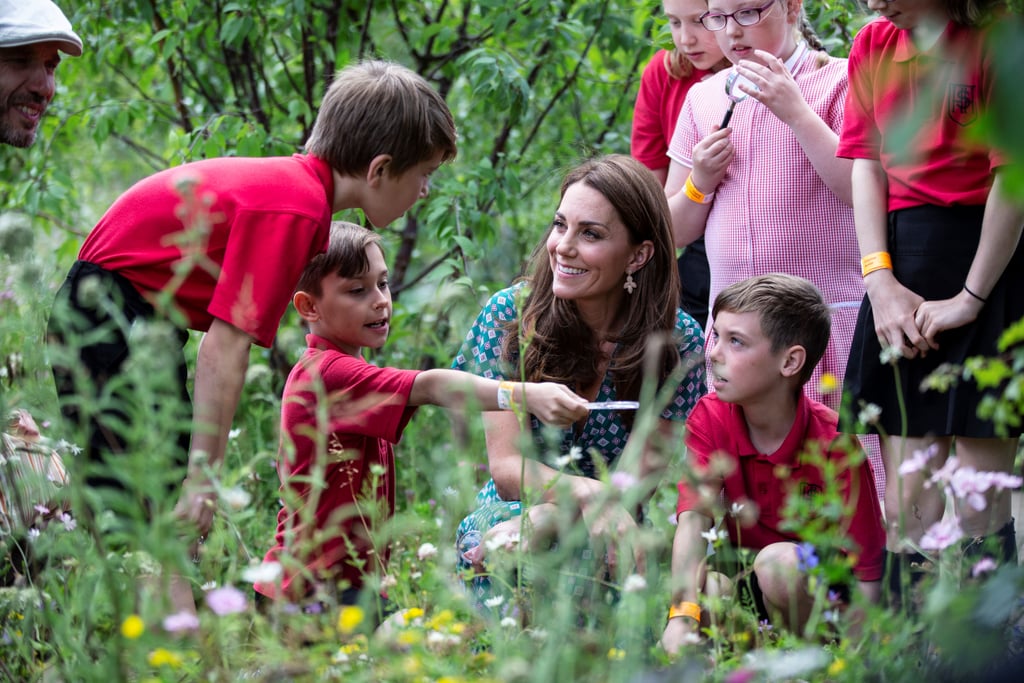 Kate Middleton is growing quite a green thumb this Summer. Her Back to Nature garden reopens at the Hampton Court Palace Garden Festival, where on Monday afternoon the Duchess of Cambridge invited children from four different charities to enjoy a treasure hunt, insect spotting, and a picnic. Kate first introduced her Back to Nature garden — which she co-designed with landscape architect Davies White and the Royal Horticultural Society — at the Chelsea Flower Show. The original garden featured a tree house and rope swing — which the duchess' children Prince George, Princess Charlotte, and Prince Louis thoroughly enjoyed — edible plants, and flowers to be used for crafts. The interactive garden was so successful that the Duchess brought the same concept to the Hampton Court Palace Garden Festival, but on an even larger scale. The garden at Hampton Court Palace is reportedly double the size of the one at the Chelsea Flower Show and includes a new hidden burrow, rolling hill, and stream. For an afternoon playing outdoors, the duchess ditched the casual white sneakers and wide-leg khakis she wore to the Chelsea Flower Show and instead went with a simple-yet-elegant green Sandro dress, a pair of affordable Accessorize earrings (that are now sold out, naturally), and her go-to espadrille wedges she's been rocking all Summer. The Duchess took the children through the garden space, where she helped them look for bugs and pointed out different types of flowers. Prince George gave the garden at the Chelsea Flower Show a "10 out of 20." We wonder what he'll have to say about this one.