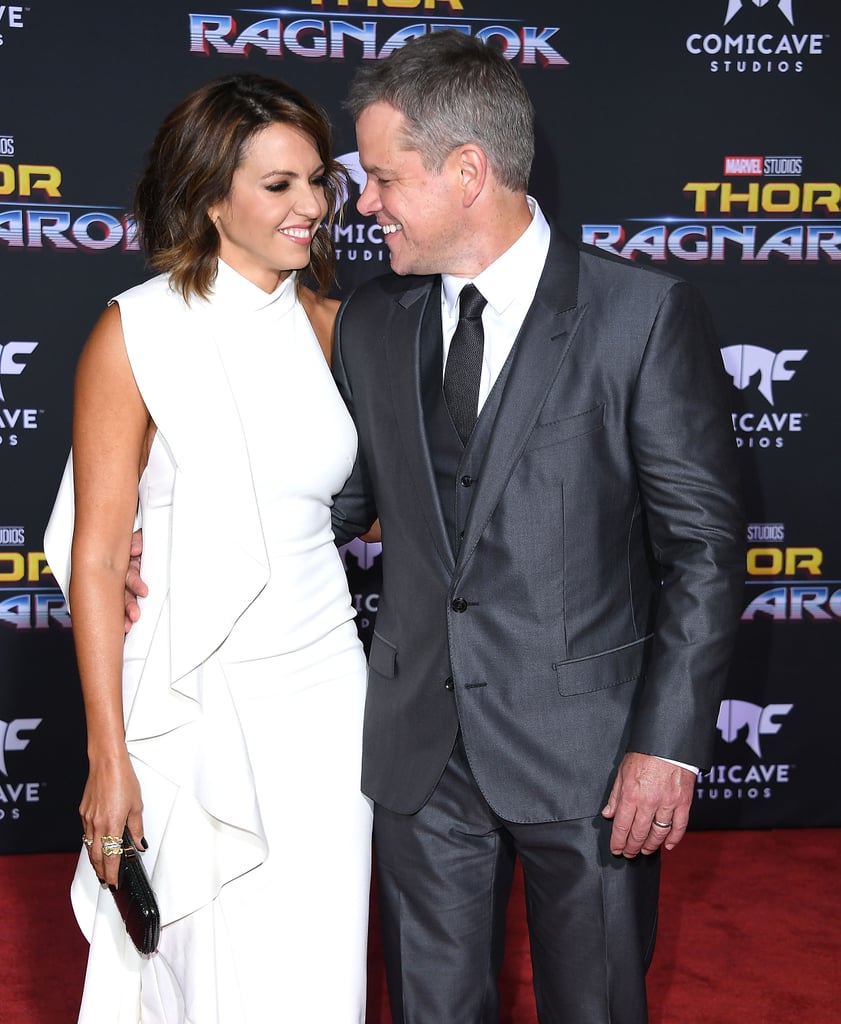 Matt Damon was all smiles when he attended the Thor: Ragnarok premiere in LA with his wife, Luciana Barroso, on Tuesday. The carefree outing comes on the heels of Matt publicly denying that he tried to kill a 2004 New York Times expos surrounding multiple allegations about Harvey Weinstein's sexual misconduct. According to Sharon Waxman, a former reporter for the publication, her story was "gutted" after she received phone calls from Matt and Russell Crowe "vouching" for Harvey and then-Miramax executive Fabrizio Lombardo.

"My recollection was that it was about a one minute phone call," Matt told Deadline about his previous chat with Sharon. "Harvey had called me and said, 'They're writing a story about Fabrizio . . . and it's really negative. Can you just call and tell her what your experience with Fabrizio was?' So I did, and that's what I said to her. It didn't even make the piece that she wrote. As I recall, her piece just said that Russell and I had called and relayed our experience with Fabrizio. That was the extent of it and so I was very surprised to see it come back. I was never conscripted to do anything."

Related:
Celebrities Speak Out Against Harvey Weinstein Amid His Sexual-Assault Allegations

In addition to clearing up allegations surrounding the New York Times article, the actor also addressed the recent criticism he has faced from actresses like Jessica Chastain and Rose McGowan for not speaking up sooner. "Look, even before I was famous, I didn't abide this kind of behavior," he explained. "But now, as the father of four daughters, this is the kind of sexual predation that keeps me up at night." Even though he did five or six movies with Harvey, he claimed that he "never saw" any of the "type of predation" Harvey is being accused of. "I would have stopped it," he added. "And I will peel my eyes back now, father than I ever have, to look for this type of behavior. Because we know that it happens. I feel horrible for these women and it's wonderful they have this incredible courage and are standing up now."