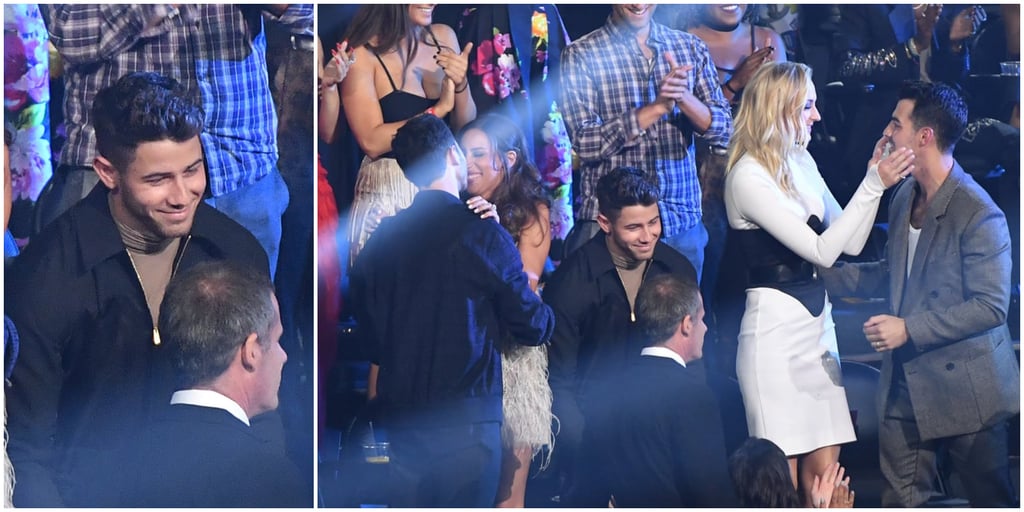 Nick Jonas officially earned his crown as the king of memes at the MTV VMAs this year when he fifth-wheeled his brothers and their wives like a relatable-as-hell champ. Nick, Joe, and Kevin returned to the star-studded award show for the first time in 11 years on Monday, and although Kevin and Joe brought Danielle Jonas and Sophie Turner, their respective spouses, Nick's wife, Priyanka Chopra, was noticeably not in attendance. After the musical trio performed at The Stone Pony in their home state of New Jersey, they returned to the Prudential Center, where Nick was sandwiched in the middle of the two couples.

During the show, all eyes were likely on Nick when the Jo Bros won the best pop award for their comeback song "Sucker." While his siblings immediately celebrated the victory by standing up and smooching their wives, the 26-year-old singer awkwardly stood in the middle with the funniest smirk on his face. The moment certainly didn't escape eagle-eyed viewers who started circulating photos of Nick embodying the be-all and end-all of token-single-friend moods. Ahead, see the photos of him seemingly missing his better half, along with all the funny memes sparked by his fifth-wheeling moment. We feel for you, Nick.