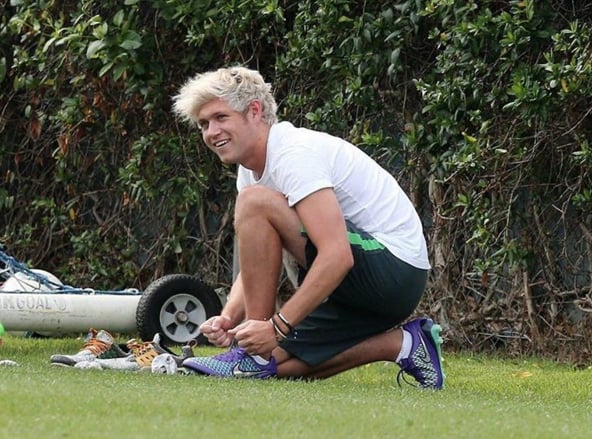 Zayn Malik may be the (former) member of One Direction known for changing up his coif, but this time, Niall Horan is getting in on the fun. While on hiatus from the group, it seems he has taken advantage of his free time and hit up the salon. He was spotted playing soccer — or is it football? — with the Los Angeles Galaxy team sporting a shock of white-blond hair.

Now, the singer is a natural brunet but has long been bleaching his mane to achieve flaxen strands. His fans caused #brunetteniall to trend on Twitter a few months ago, hoping that a break from the band would convince him to embrace his roots. Unfortunately for them, it appears that bleach is an essential part of Niall's grooming routine.

While fans may be initially disappointed, we think they'll fall in love with his new look pretty quickly — his platinum hair constrasts beautifully with that California tan, making Niall look even hunkier than usual. See for yourself!

Boy Bands
One Direction Might Just Be the Best Dressed Boy Band There Ever Was and, These Photos Prove It
by Kate-Lynne Wolmarans 23/7/20
Latest Celebrity and Entertainment