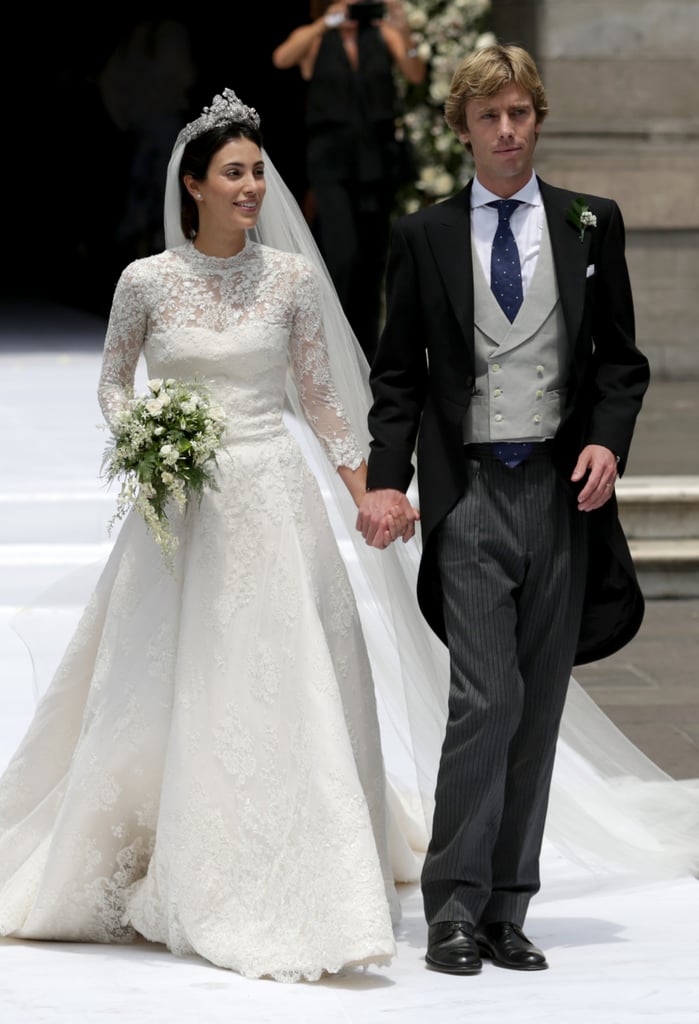 There's nothing quite like a royal wedding! On Friday, Prince Christian of Hanover wed lawyer and former model Alessandra de Osma in a religious ceremony at St. Peter's Church in Lima, Peru. The event was technically the couple's second wedding, as they formally tied the knot in a lowkey civil ceremony in London back in November. On her wedding day, the bride wore a beautiful white long-sleeved lace dress by Jorge Vázquez and accessorized with an insane silver tiara and sweeping veil.

The 32-year-old German prince first met 25-year-old Alessandra, a native of Peru, in 2005; the gorgeous brunette actually acted as a tour guide for Christian on one of his visits to the South American country, but they didn't begin dating until nine years later. They were engaged in April 2017.

Prince Christian is the younger son of Ernst August, Prince of Hanover, and his first wife, Chantal Hochuli. He is second in the line of succession to the former Hanoverian throne, after his older brother, Prince Ernst August. Christian's stepmother is Princess Caroline of Monaco, who married his father in 1999. Together, they share 18-year-old daughter Princess Alexandra of Hanover, and Christian also has stepsiblings in Caroline's other children — Andrea, Charlotte, and Pierre Casiraghi — from her former marriage to Italian sportsman heir Stefano Casiraghi.

Christian and Alessandra's gorgeous Peruvian ceremony was attended by his royal siblings, of course, as well as supermodel Kate Moss, her boyfriend Count Nikolai Von Bismarck, and British princesses Beatrice and Eugenie; perhaps Eugenie picked up some inspiration for her own wedding, as she is set to walk down the aisle with fiancé Jack Brooksbank on Oct. 12. And before that, we'll get to see her cousin Harry wed Meghan Markle in May! Alessandra and Christian's royal wedding festivities will be a three-day affair, and you can see all the stunning photos ahead.