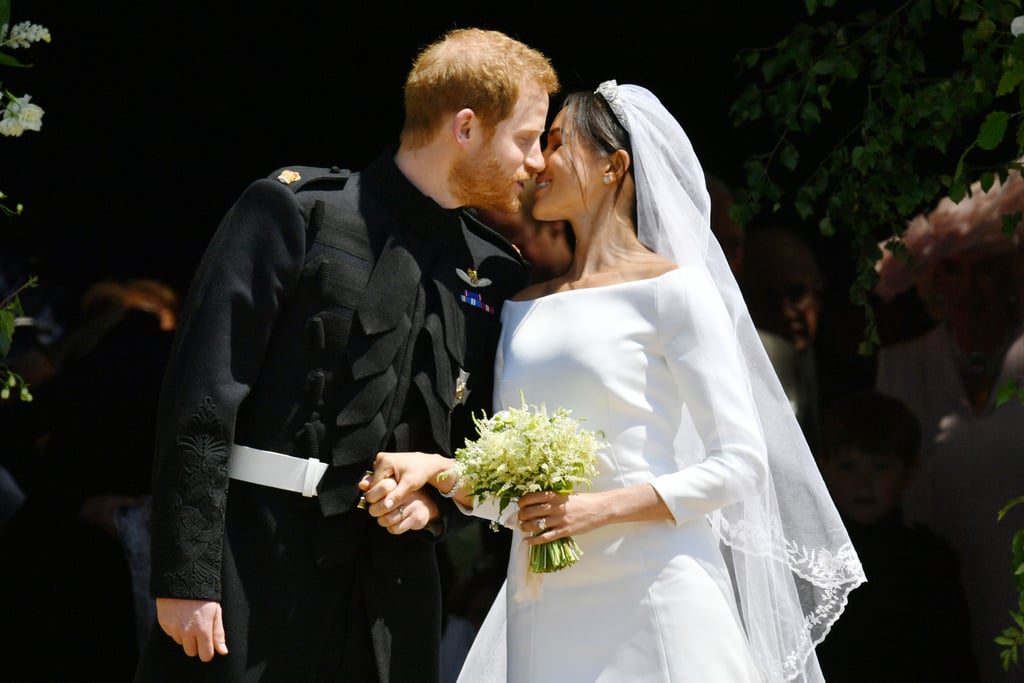 Prince Harry and Meghan Markle are officially married! The couple tied the knot in a gorgeous ceremony at St. George's Chapel in London on Saturday, May 19, and we have every single photo from their big day for your viewing pleasure. Meghan, who arrived to the chapel with her mother, Doria Ragland, was a vision in a white dress by Clare Waight Keller, while Harry looked as handsome as ever in his military uniform. The couple was joined by Harry's older brother, Prince William, and Meghan's best friend, Jessica Mulroney, as they walked down the aisle at Windsor Castle. They exchanged vows in front of the royal family, close friends — including Priyanka Chopra, Serena Williams, George and Amal Clooney, and David and Victoria Beckham — and 1,200 members of the public. Members of their wedding party included Prince George and Princess Charlotte, who also had roles as a pageboy and flower girl, respectively.

Related:
10 Times Harry and Meghan Showed Us That They're the Perfect Royal Match

During the ceremony, Meghan was walked down the aisle by herself, and was helped at the Quire by Prince Charles. She was originally set to walk with her father, Thomas Markle, but news broke earlier in the week that Thomas had decided not to attend the wedding after he was caught staging photos of himself with the paparazzi as well as undergoing heart surgery. Harry and Meghan's hour-long ceremony also featured a heartfelt reading by the late Princess Diana's sister Lady Jane Fellowes, who gave the reading from the Song of Solomon.

After saying "I do," Harry and Meghan left the church for their carriage procession in the Ascot Landau, which was often used by Princess Diana during her time as a member of the royal family. It's also the same carriage Harry rode in during his brother's wedding to Kate Middleton in 2011.

Harry and Meghan first struck up a relationship in May 2016. They made their public debut as a couple at Harry's Invictus Games in September 2017 and announced their plans to marry two months later. Now that Harry and Meghan are officially husband and wife, the pair will jet off on their honeymoon — but not immediately. According to Kensington Palace spokesman Jason Knauf, "The couple will be going on honeymoon, but not straightaway." He added that, instead, "They will have their first engagement as a married couple in the week after the wedding." They are reported to be celebrating at a luxury resort in Namibia.