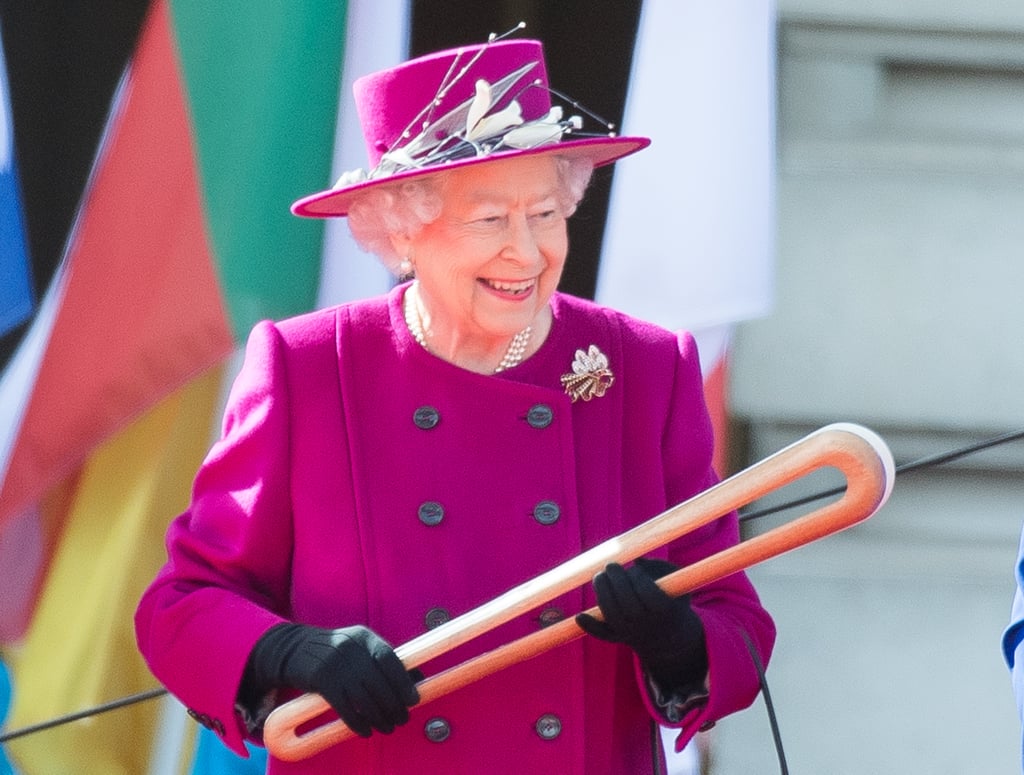 While you were struggling to get out of bed and make coffee on Monday morning, Britain's Queen Elizabeth II spent a few hours celebrating the unity of the 52 countries that make up the Commonwealth of Nations (all in a day's work, right?). The 90-year-old monarch arrived outside Buckingham Palace with husband Prince Philip, Prince Edward, and Commonwealth Games Federation President Louise Martin to launch the queen's baton relay for the XXI Commonwealth Games. Although she usually keeps a pretty straight face, the queen flashed a big smile while handing off the baton to retired Australian cyclist Anna Meares. The event follows the queen's message about building "peace by defending the dignity of every individual and community."

Her hand-off of the baton signals the start of the relay's 388-day journey around the Commonwealth. Eventually the relay will end when the baton arrives at the opening ceremony of the Gold Coast Games (which aren't set to start until April 4, 2018), much to the delight of the 2.5 billion citizens who make up the Commonwealth. Before it does, however, the baton will make another appearance in London during a service at Westminster Abbey, which is expected to see not only the queen and Prince Philip but also Prince Charles and wife Camilla, Prince Harry, Prince Andrew, and Prince Edward.

"Over the next 12 months, the baton will visit people living in the nations and territories of our Commonwealth family in every continent and ocean," the queen said. "Carried on its way by thousands of people of all ages and backgrounds, by the time it reaches its final destination, the Queen's Baton will have brought together, through its route and symbolism, almost 2.5 billion people who share the special connection of being Commonwealth citizens. Contained within the Baton will be a written message that will be opened and read at the Commonwealth Games in Australia next year. However, there is an even more powerful message to be seen and experienced as the Baton passes from hand to hand, from seashore to mountaintop, through cities, towns and villages. It is the message of a peace-building Commonwealth."