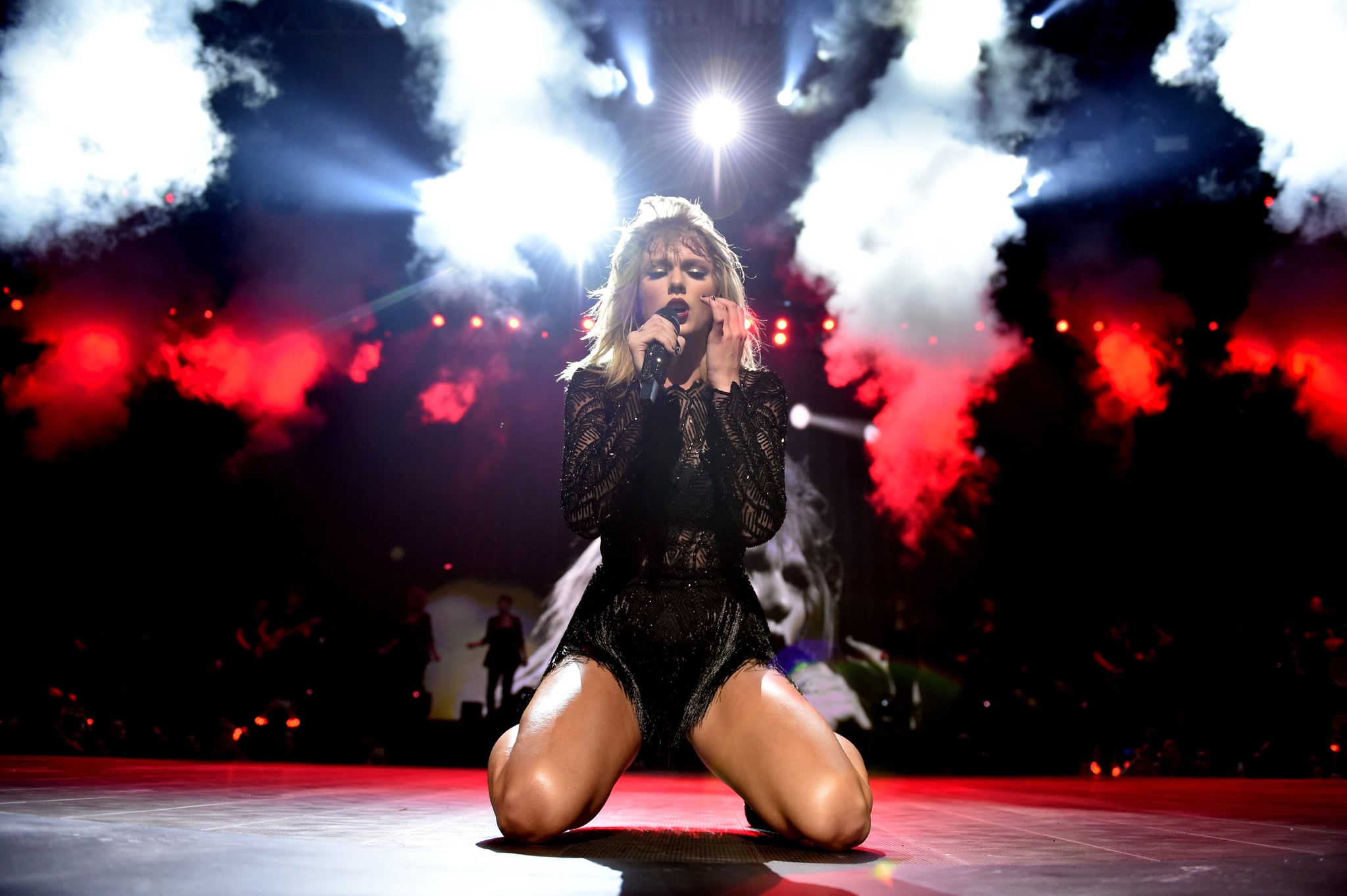 I have a feeling Taylor Swift is loosening up. If you had only heard the first two singles from her recently released album Reputation, "Look What You Made Me Do" and "...Ready For It?," you might think that Taylor's newfound focus is on nothing but karma and revenge. But take a closer listen — to the catchy songs that you'll actually have on repeat — and you'll notice a few recurring themes throughout nearly all 15 songs: outspoken lyrics about drinking, sex, and relatable, "edgier" topics that have previously been uncharted territory for Taylor.

As someone whose knowledge of Taylor Swift's music spans all the way back to the days of 2008's Fearless (and whose fan status begrudgingly remains despite recognition of Taylor's mistakes and failed attempts to resist her music), I appreciate this. Not because talking about drinking makes you a cool person or because "sexy" songs automatically make great ones, but because I think it means something more for Taylor Swift — that she's not so squeaky clean and focused on being . . . perfect.

It's never been common to readily associate Taylor Swift as someone who 'likes to drink' or who 'talks about sex,' and this is the first time she has sung about those things so openly.

Up until now, Taylor's public image has never made her seem like the girl who would meet you at the bar to catch up, or who'd be down for "drinking beer out of plastic cups" on the roof — and who could blame her? Being constantly scrutinized by paparazzi and having millions of young fans means it's not always easy to let loose. In a 2014 interview with Barbara Walters, a 25-year-old Taylor, now 27, said, "If that story gets out or some 10-year-old sees that I did that . . . My actions do have ripples."

In that same interview, Walters said to Taylor, "You don't drink, you don't smoke, you don't get into trouble. Tell me something bad about Taylor Swift," to which Taylor responded, "I mean I do drink; I'm 25. I was at a Knicks game and I had a beer and everybody was like [gasps]. But I did wait until I was 21 to drink because I was so paranoid about getting in trouble." Barbara continued by saying, "Taylor Swift is one of the biggest stars there is today, and she's squeaky clean." It's never been common to readily associate Taylor Swift as someone who "likes to drink" or who "talks about sex," and this is the first time she has sung about those things so openly. I think she's finally giving herself a bit of a break and letting herself just live.

And now more than ever, Taylor is the friend who'd have you over for a night of painting and drinking wine; or the girlfriend who's cool with going out to a dive bar for an Old Fashioned or two, as noted in "Delicate" ("dive bar on the East side, where you at?"); or the person who'd admit, "You know I'm not a bad girl, but I'd do bad things with you" as she does in "So It Goes. . . "

More evidence of Taylor's newfound "chiller" vibe, as I call it, comes in the form of plenty of lyrics throughout Reputation. She has used this album to showcase her openness to talking about sex and — gasp! — even throwing around a curse word. "Dress," the album's most decidedly sexy song, is like the more scandalous version of "Wildest Dreams" from 1989. On it, Taylor sings, "Only bought this dress so you could take it off" and "carve your name into my bedpost."

She playfully jokes in "Gorgeous," opening the song with, "You should take it as a compliment that I got drunk and made fun of the way you talk." She shows a new side in track three, "I Did Something Bad," belting, "If a man talks sh*t then I owe him nothing" and, "They say I did something bad, then why's it feel so good?" These subtleties are a big deal to Taylor's fans, who never knew her as a "daring" kind of artist. Taylor gets more relatable than ever in "Dress," crooning, "I'm spilling wine in the bathtub / You kiss my face and we're both drunk" (she drinks wine while taking baths, too!). She's noticeably giving fewer f*cks, and I'm kind of living for it.

the best part about 'i did something bad' was when taylor said "SHIT" as if her life depended on it. taylor swift cursing is a big deal you guys. #reputation

If the old Taylor can't come to the phone right now because she's "dead," I think I'd happily hang up and go hang with the new Taylor instead.