March is clearly the month for ladies in Dubai, with one day dedicated to moms, another for wonderful women in general and a few opportunities to show off our fabulous fashion sense thrown in for good measure. Those are not the only highlights we have to look forward to... foodie fans, bookworms and ladies who love to keep up with celebrities are also in for a treat. Read on to make sense of the madness: 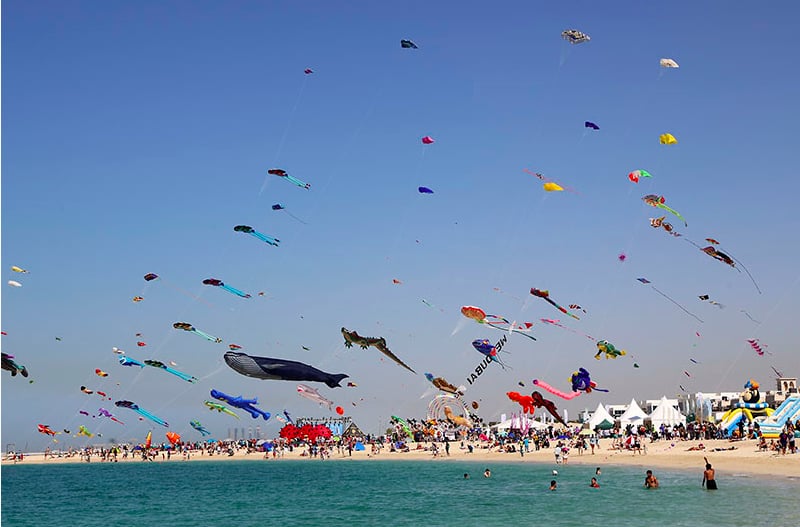 Everyone knows that in Dubai bigger is better; that goes for skyscrapers, shopping experiences and it definitely applies to boats too. Surely we're not the only ones dreaming about relaxing on a yacht with Leonardo DiCaprio every time we glance out to the Arabian Gulf? There's on-board yacht dining, watersports stunts and the chance to win prizes, so it's worth checking it out.

Even people who aren't the biggest fan of reading endless books can enjoy this festival - the highlight here is getting inspiration from the many famous faces showing up. Celebrity authors including fitness guru Joe Wicks (aka The Body Coach), Children's favorite Jacqueline Wilson, plus actresses Meera Syal and Nadia Sawalha will be making appearances.

Part of the ongoing Dubai Food Festival, expect the city's food trucks to be out in full force alongside live art demonstrations and local performers. Usually set in the JBR and Al Quoz neighbourhoods, this is the first time the event ventures to the Bay.

It's time to reflect on the social, economic, political and cultural achievements of females. So teaming up with Alliance Francaise, Frioul restaurant will be hosting wonderful women for the evening.

There will be more than enough brunches and afternoon teas to celebrate the occasion which falls March 6 in the UK and Ireland and March 21 in Middle Eastern countries. However, dine at Eataly and 10 moms will win lasagne cooking classes at the Italian restaurant on March 28. Go one step further than flowers and chocolates

The American rapper will be the first artist to grace the stage of the brand new stadium, The Venue. The temporary stage is now set and the finished thing will be ready next year with a 25,000-person capacity. But first, it's time to channel our inner Sophia Grace and Rosie and get practicing our Super Bass routine.

A day at the Polo is all about the dressing up, so prepare to go all out and mingle with the stylish this year when the globe-touring event returns. Aside from the fashion opportunities, don't be surprised to bump into a few recognizable faces - the Made in Chelsea gang were there in 2015 as was Middle Eastern royalty. Guests enjoy a VIP lunch, fashion show and of course there will be men racing around on camels and horses.

It's a weekend to keep that hat out of the closet as the richest horse race in the world takes place. the winner gets a whopping $10million and the combined winnings are $30million. In 2015 Kylie Minogue entertained the crowds at the post-race concert, will this year's act Janet Jackson trump the performance?

As if anyone needs an excuse to get out to the beach, there will be kite buggying, kite surfing plus a pretty show by day and night. Come dark, a laser and music show will have spectators tapping their feet and best of all, it's free.

What better way to celebrate St Patrick's Day than with the Irish? The comedian will be in the emirate as part of his Crowd Tickler tour so prepare to laugh until it hurt this Paddy's Day.

Nicki Minaj isn't the only music event to be excited about this month. Reggae fans rejoice because these old time crooners are teaming up to perform on stonker of a show. If we're lucky the Can't help Falling in Love With You crooners might persuade Billy to let them in on a When the Going Gets Tough, The Tough Gets Going collaboration.

Hosted for the first time at d3, the seventh edition of the style extravaganza brings us global and regional icons hosting highly-demanded talks and the coolest catwalk presentations.

Quite possibly everyone's longest loved musical, the Vonn Trapp family is coming back to Dubai. It's the perfect opportunity to sing along to songs like Do Re Mi, My Favorite Things and Edelweiss.

American expats missing home might want to take shelter here throughout the month to enjoy a season of basketball games. The venue will be hosting special brunches, tailgate parties and there'll even be basketball coaching and competitions to keep customers entertained before the game. It'll feel like college all over again.

Using a 360 degree stage the audience is immersed in this circus-meets-theatre experience. Impressive acrobats and all sorts of awesome stunts will be delivered by the 20 performers who have taken their act across the world including Las Vegas and Sydney.

British act Example is returning to outdoor nightlife venue and he brings with him the likes of Garage music stars DJ Luck & MC Neat plus Masterstepz. The music will be playing from early evening until the wee hours of the morning thanks to Club MTV.

The leading international art fair is taking over 90 galleries from around the planet in programmes titled the Marker, Contemporary and Modern.

The cultural hub for musicians, artists and entrepreneurs takes on a speakeasy feel with the unmarked door to enter hidden on the 4th floor of a car park. One of few down-to-earth nightlife venues in Dubai, enjoy, if you can find it.

Another brand new opening in the city, this venue holds intimate Tasting Table sessions for up to six people at a time. All mixed drinks are stirred (not shaken) and an expert will teach you and your friends how to make the perfect refreshing beverage.

Join the conversation
Dubai In March
Latest Celebrity and Entertainment