Timothée Chalamet and Lily-Rose Depp's glamorous appearance at The King world premiere will leave you bowing down — and I'm not just saying that because of the convenient pun. Wearing complementary gray outfits, the costars celebrated their forthcoming Netflix film at the 2019 Venice Film Festival on Monday. Though Timothée and Lily were reportedly dating as of Oct. 2018, the two appeared to keep it strictly professional on the red carpet.

Timothée and Lily, who portray Henry V and Catherine of Valois in the film, were joined by their costars Joel Edgerton, Ben Mendelsohn, Tom Glynn-Carney, Sean Harris, and director David Michod. Fortunately Robert Pattinson, who portrays Louis, Duke of Guyenne, was unable to attend, for that might have been too much to handle. See the royally stunning shots of Timothée and Lily ahead. 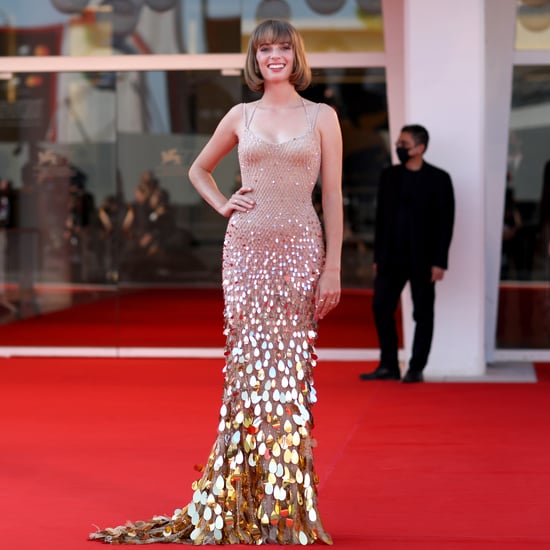 MTV VMAs
Can Someone Please Add "Beauty Icon" to Lady Gaga's Credentials For This Tricon Award?
by Danielle Jackson 3 weeks ago

MTV VMAs
In Case It "Rains on Her," Lady Gaga's Intergalactic Outfit at the VMAs Has Her Covered
by Perri Konecky 3 weeks ago

Joey King
Joey King Is Serving Up Realness On the VMAs Red Carpet: "I Don't Really Look Like This"
by Jessica Harrington 3 weeks ago