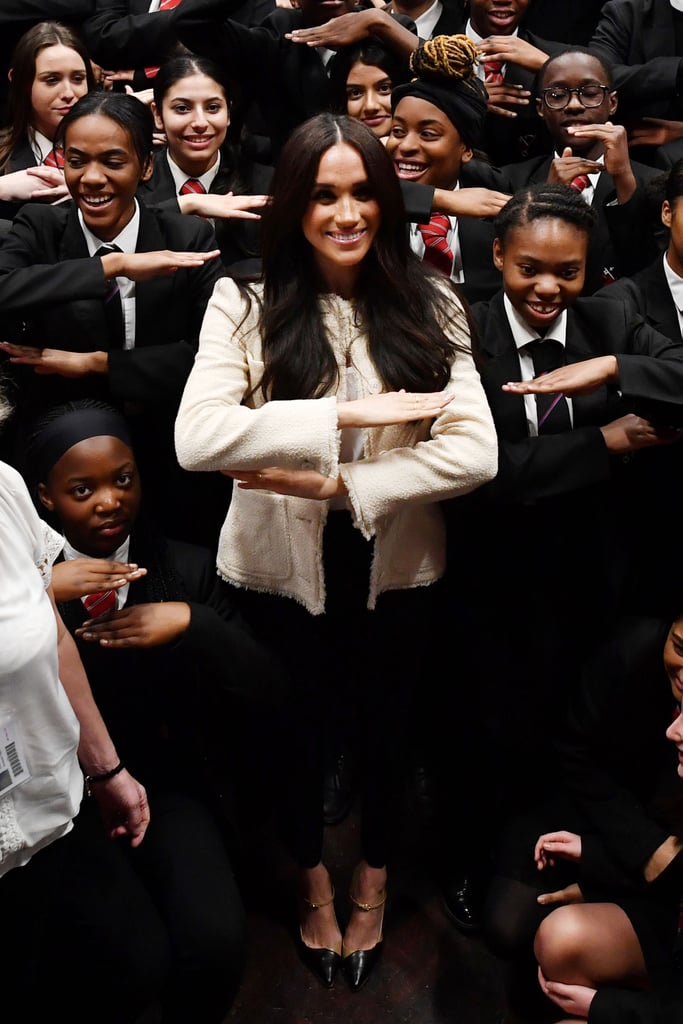 After celebrating International Women's Day a couple of days early, Meghan Markle is sharing her special honoring with fans. On March 8, the duchess revealed she took a private trip to the Robert Clack School in Dagenham, England, just two days before the global holiday. She posted a gallery of photos and a video montage from the Friday visit that show her speaking with students about the importance of International Women's Day. She also commemorated the 50th anniversary of Britain's Equal Pay Act, which aimed to prevent workplace discrimination against women.

At an assembly, Meghan was joined on stage by Geraldine Dear, one of the workers at Dagenham's Ford motor plant who went on strike for equal pay in 1968, helping to initiate the Equal Pay Act. Speaking to the students, Meghan noted, "Women who had the strength to really stand up for something that they knew needed to be done is the best example of no matter how small you might feel, how low you may feel on the ladder or the totem pole, no matter what color you are, no matter what gender you are, you have a voice and you certainly have the right to speak up for what is right."

She continued, "I encourage and empower each of you to really stand in your truth, to stand for what is right — to continue to respect each other . . . Let's all rally together to make International Women's Day something that is not just on Sunday, but frankly, feels like every day of the year."

Meghan has spoken about her dedication to fighting for equal rights before — many times. In 2019, she marked International Women's Day by delivering a poignant speech at a panel discussion about women's issues at King's College in London. At the event last year, she spoke about her history of altruism and activism that begun long before she was a royal.

The International Women's Day appearance comes in a busy week for Meghan, as she and Prince Harry make their last few appearances as senior members of the royal family. Recently, they made stunning appearances at the Endeavour Fund Awards and the Mountbatten Music Festival. They also joined the Queen Elizabeth II for church on Sunday. On March 9, Meghan and Harry will attend the annual Commonwealth Day service at Westminster Abbey, joining both the queen and the Duke and Duchess of Cambridge for the first time publicly since announcing they would be stepping back from their roles. Ahead, see more moments from Meghan's visit to the Robert Clack School.