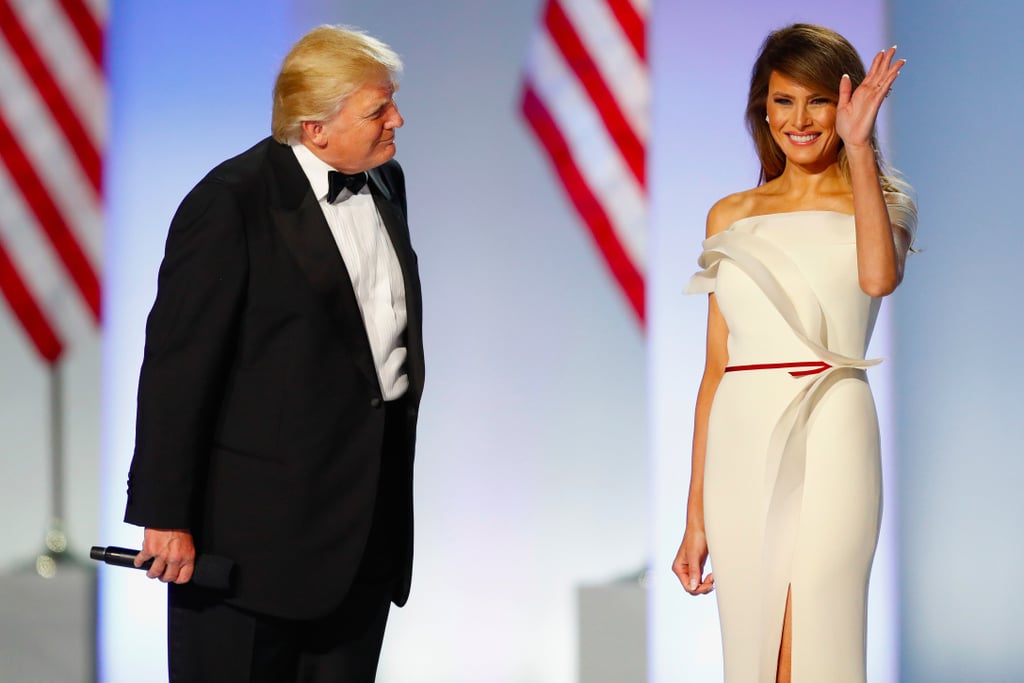 Melania Trump's Inaugural Gown Is Daring, but It Might Not Surprise You

Despite rumors that Karl Lagerfeld would design Melania Trump's inaugural gown, the FLOTUS went a different route when she attended the Liberty Ball alongside her husband. Though her crisp white silhouette might be attention-grabbing, what with its off-the-shoulder silhouette, leg slit, crimson bow, and dramatic ruffle, it's not exactly shocking. Melania collaborated on the number with Hervé Pierre, who recently left his 14-year post as creative director at Carolina Herrera.

"It's an honor to dress the first lady. I was actually lucky because over my 20 years in the U.S., I dressed all the first ladies: Mrs. Clinton at Oscar [de la Renta], Mrs. Bush, and Mrs. Obama at Carolina Herrera. So I feel lucky and honored to dress Melania Trump, but this time under my name," Pierre told WWD.

Melania is not afraid to try out bold trends while in the public eye, and she's got a glamorous taste as far as eveningwear goes, having worn a gold sequined Reem Acra dress to dinner the night before the inauguration. After sporting a blue cashmere Ralph Lauren coat earlier, Melania has completed her patriotic color story with the addition of red and white, thanks to the custom piece she cocreated.

Read on to get a closer look and catch a glimpse of the beaded Carolina Herrera princess gown Ivanka wore, seemingly solidifying the Trump family's relationship with the fashion house.