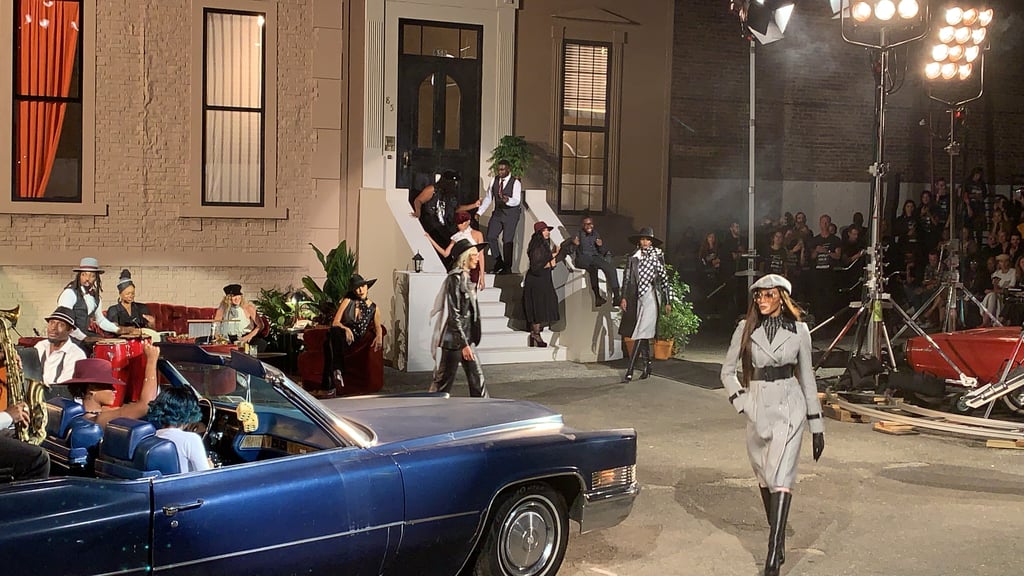 Zendaya's collection with Tommy Hiliger was just as freaking amazing as I thought it'd be. Tommy always goes all out with his sets (remember when he turned Pier 16 into a carnival?!). As part of Zendaya's ongoing partnership with designer, the Euphoria actress revealed her Fall 2019 collection, and it finally made its runway debut at the legendary Apollo Theater during New York Fashion Week. As I walked in, I saw Tommy and Zendaya t-shirts with the phrase "For One Night Only" written on them being sold in the front and it felt like I was walking into a concert. The show started off with a trumpet player making his way down the runway, which was transformed into a street, and it felt like we were transported to New York in the '70s with sirens and train whistles blaring in the background. Then, out of nowhere an old convertible with a group of musicians drove in while models started walking down the road. I felt like I was in the middle of the coolest block party. There wasn't a second of the show that didn't have the crowd singing and dancing in their seats.

Thanks to the show's see Now, buy Now model, I already had a good idea of what the pieces looked like. While it's one thing to see it on your laptop, it's a whole other thing to see it IRL. Models danced their way down the road in dramatic silhouettes that were inspired by sultry '70s styles.

Prior to the show starting, Tommy sent out a special note to all the guests expressing his gratitude about working with Zendaya. "This evening also marks the end of my two-season collaboration with Zendaya and image architect, Law Roach. With redefined power dressing at its core, the collection's bold tailored pieces are infused with a modern twist that celebrate the strength that comes from fearlessly being your true self. We didn't want to hold anything back tonight, with Zendaya's vision, dedication and strong voice bringing a unique edge to our collaboration. She has an important message to tell, and sharing our platform to express her creativity has been an honor."

If you're hoping to get your hands on the collection ASAP, you're in luck. The apparel, accessories, swimwear, and sleepwear launched in time with the runway show.