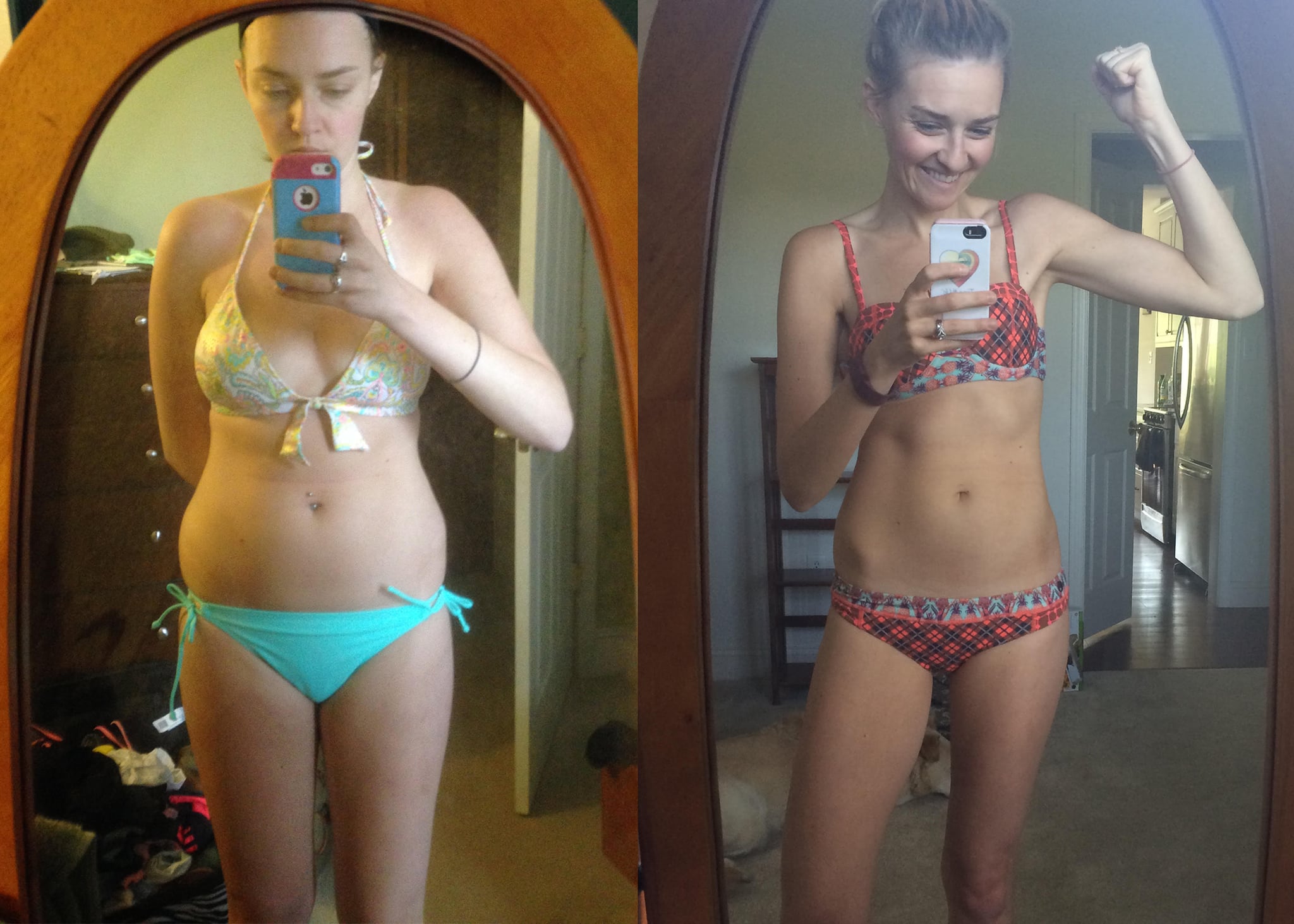 We first discovered Cait's stunning transformation photos on the TIU community pages. From there, we saw her Instagram, in which you can see a day in the life of Cait — her workouts, healthy eats, and happy, healthy lifestyle. But we wanted the full scoop: What was her story? Where did she begin, and how did she get here?

Through email, Cait A., who declined to give her last name, told us she was "never incredibly overweight," but since her early teens, she had suffered from body image issues. "I always felt chunky . . . things didn't fit me right," Cait said. While her goal was never about a number on the scale, the desire to improve her self-esteem and feel good in her own skin led to a beautiful transformation.

Heading into her wedding, Cait was fitted for her dress at a size 10, and at her final fitting — after committing to a fitness and healthy nutrition routine — she was a size two. "That blew my mind!" she said. 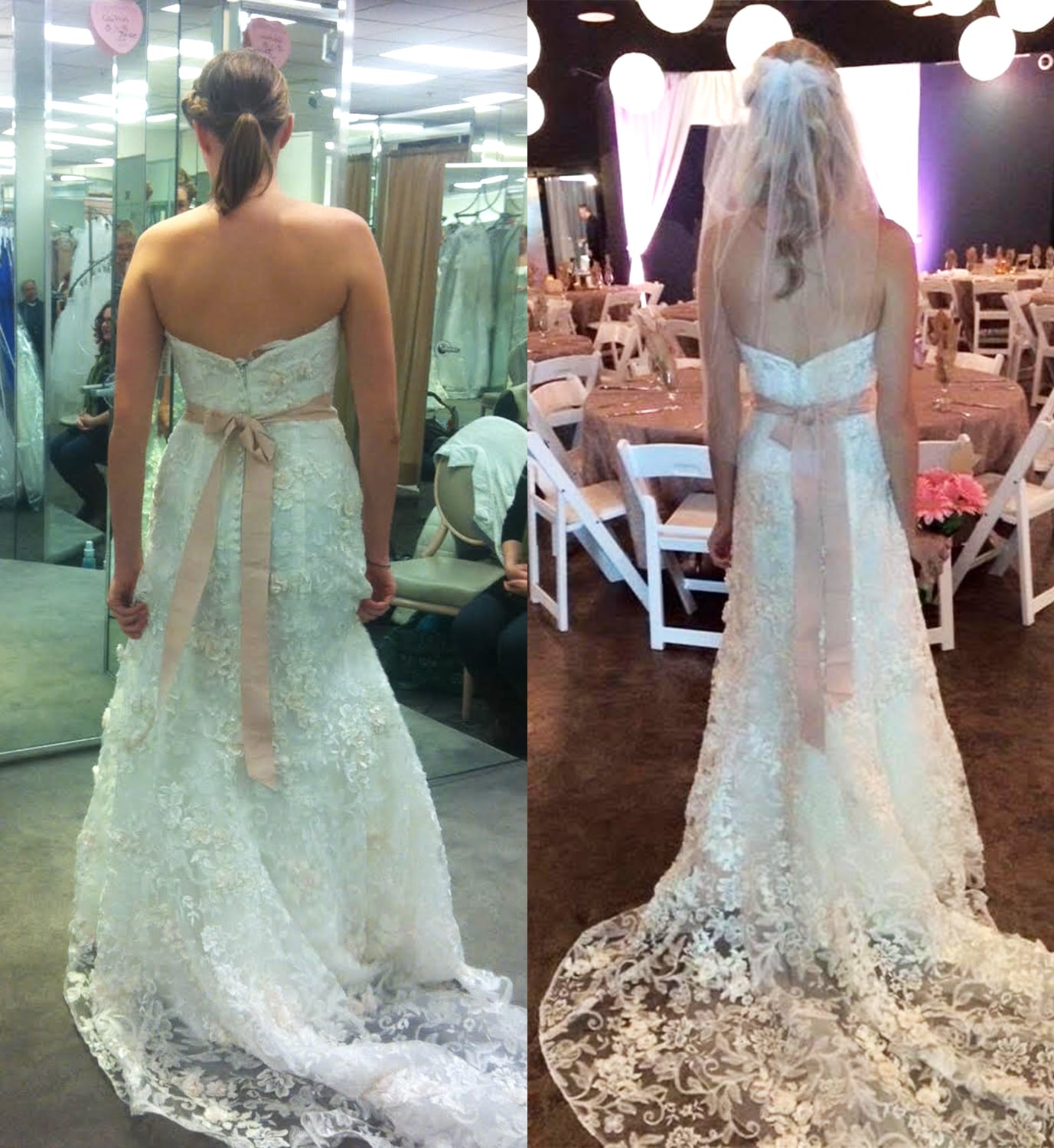 Searching For the Right Balance

Because Cait had been averse to sports, she struggled to find a fitness routine that stuck. She also considers herself a big foodie, so restrictive diets didn't work. Her struggle with exercise and diet only served to make her feel worse about herself. "I felt super guilty after eating, especially when I indulged, and I would applaud myself for skipping meals," she told us. "It was very unhealthy, and just made me unhappy."

Cait knew something had to change for her to finally start feeling good about herself; she saw a glimmer of hope as she looked to a friend for inspiration. "One of my beautiful, inspiring friends had changed her life through fitness and healthy eating," she said. But she was still skeptical, saying, "It still seemed unattainable to me."

On a trip to visit her friend, all excuses were out the window. "She seemed so happy and healthy," Cait said. "I asked for her help, and that's when she introduced me to Tone It Up." Cait's friend brought the TIU program into perspective by showcasing the fun aspect of the healthy lifestyle and the massive community of women involved in the program.

Cait recalls scrolling through the TIU videos and photos with her friend, thinking that they were so relatable and fun. "It was the first time I realized maybe I can do this, and it doesn't have to be torture. These girls were just like me."

"It was the first time I realized maybe I can do this, and it doesn't have to be torture. These girls were just like me."

Cait's journey into fitness was not an "instant, dive in head first kind of thing." She started small to protect herself from failing and encountering more disappointment. First stop? Running. "Even though I hated running, it seemed easier than trying weightlifting or changing my eating habits." And although she felt a big sense of accomplishment after running her first 5K, she still wasn't noticing the physical changes she was hoping for.

It was then that she decided to fully commit to the Tone It Up program, so she created an Instagram account specifically for her workouts to hold herself accountable. "[Tone It Up founders] Karena and Katrina just made working out and living healthy seem so fun and attainable that it was time to take a chance."

A Foodie Focuses on Nutrition

It was 2014, and Cait remembers how she "took a leap of faith and bought the Tone It Up nutrition plan." But it wasn't an easy decision, especially for a foodie. "It was the scariest thing for me because I still didn't believe I could learn new ways to eat. I just told myself one day at a time." 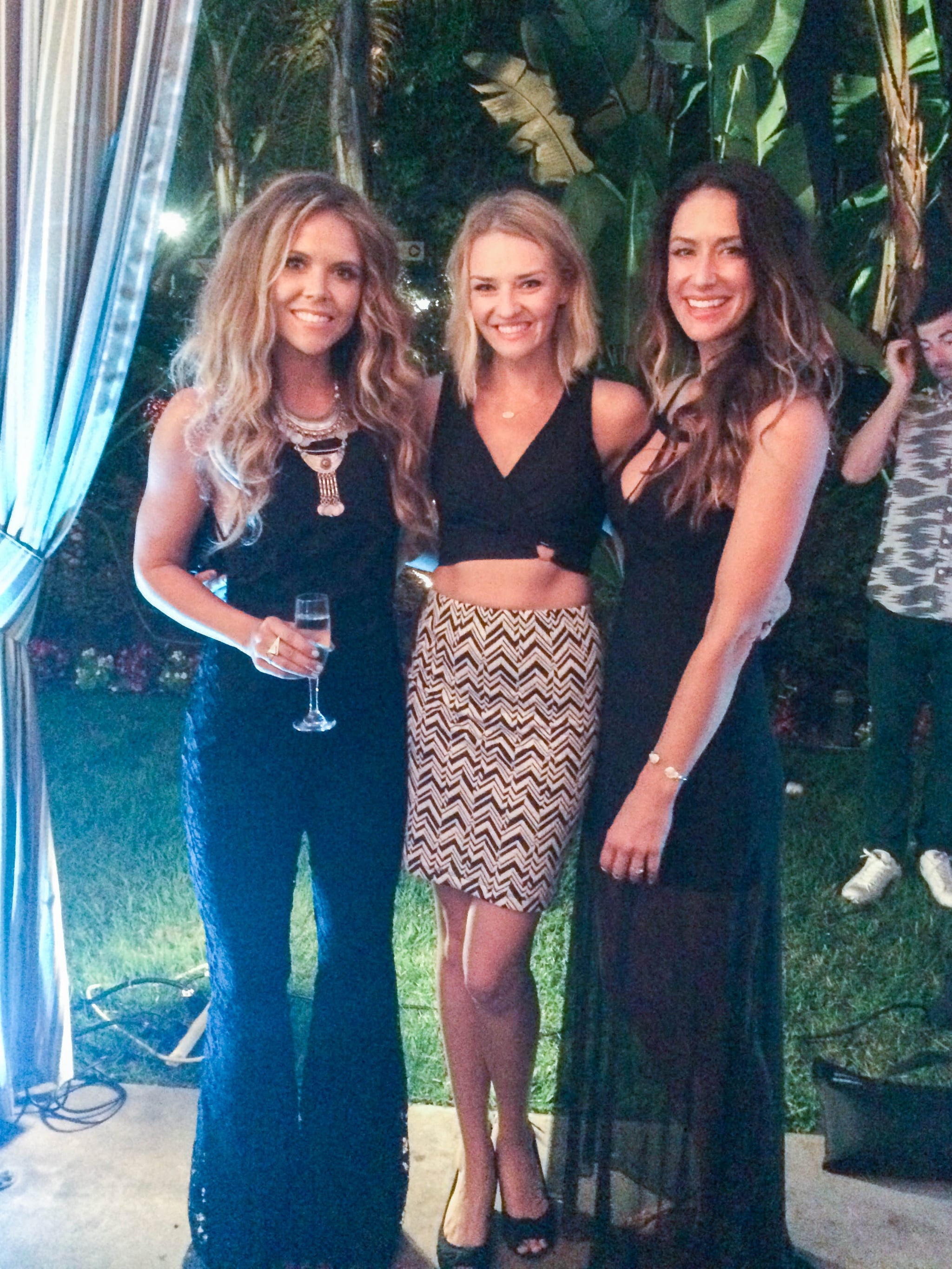 Cait with her heroes, TIU founders Karena and Katrina.

That one change carried into her overall eating plan. "I completely changed the way I ate, but it was a slow process; to this day I still live by the 80/20 philosophy." What she means is, 80 percent of the time, she follows the plan to a T, making healthier choices. Twenty percent of the time, she treats herself. "Sometimes those numbers fluctuate depending on vacations or goals I have in mind but this just works for me."

One way she stays on track is with meal prep. "It took me forever to learn how to meal prep, and realize what an important aspect that was for my success," she said. "But I finally caught on. Now I love my Sunday meal prep time!"

Nutrition also helps Cait on the days she can't work out because of recurring back problems. "It's tough when my back acts up. Those weeks I focus more on nutrition, and remind myself that it's only a period of time that won't set me back in the long run. Tomorrow's another day." Cait lives by that philosophy, eliminating guilt from her rest days or days when she's not feeling up to speed. "You don't have to be so hard on yourself," she said. "This process was, after all, to learn to love myself."

Cait Tones It Up With Fitness

In addition to the nutrition plan, Cait committed to the workouts and documented it all on social media — this was a way to connect with other women on their journeys and hold herself more accountable, but it ended up fueling her passion for the program. "I started sharing my workouts and connecting to other girls doing the Bikini Series, and found myself becoming totally addicted to the interaction and motivation!"

She attributes "1,000 percent" of her transformation to the TIU program, saying, "That series changed me." Not only were the results more visible, but it also opened up the door to a new, exciting world. "I started forming new habits, pushing myself to new heights, trying new workouts, sometimes failing, sometimes shining, but always being supported through my ups and downs. I loved supporting others and loved seeing the girls cheer me on!"

"Saying 'I am happy' never came easy until I proved to myself that I was capable of much more than I believed."

Cait's transformation began three years ago, and it's not stopping now. Cait says she now wants to build muscle and get toned; she's also signed up for her very first half-marathon at Disney World in November. Even as her goals have changed, the core of her program stays the same: Cait considers herself a TIU-for-life kind of gal (seriously though, she has a #TIUtattoo!).

She started small and never thought she'd be where she is now: "I can truly say that through this journey I learned to love myself and be proud of who I am. It is still a work in progress some days, but saying 'I am happy' never came easy until I proved to myself that I was capable of much more than I believed."

Image Source: Cait A.
Join the conversation
Before And After Weight Loss
Latest Fitness