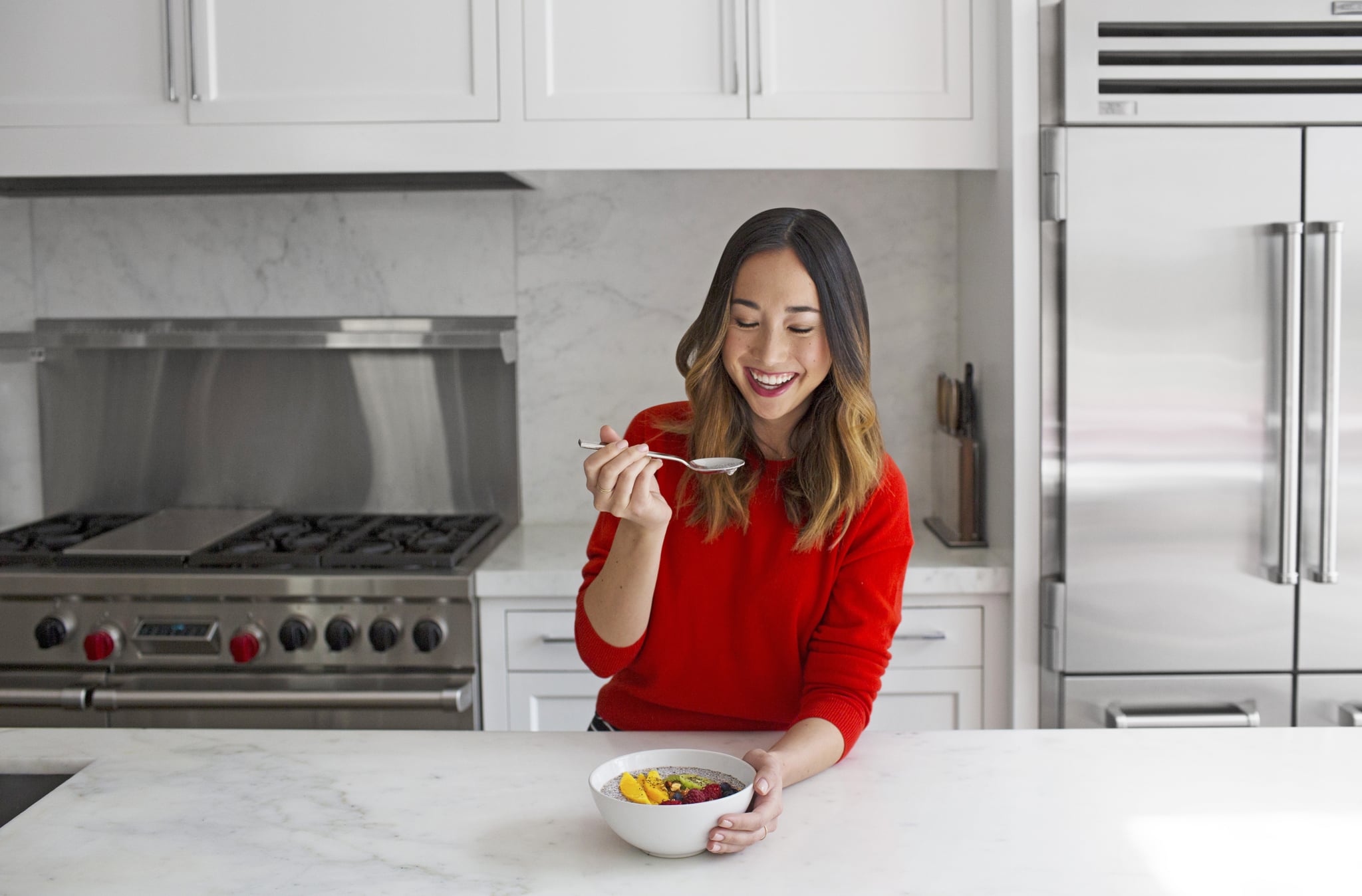 Is calorie counting a thing of the past? For some women, the answer is "hell yeah!" and I'm in major support of this movement. Throughout my whole life, I've noticed how calorie counting has had this uncanny ability to create an incredibly unhealthy relationship between a woman and her food — starting as early as five years old.

I recently reflected on how much my mother shaped my body image and relationship with food, and afterward she reminded me of a story from my time in kindergarten. I had come home from school crying; a little girl at my lunch table told me chocolate milk would make me fat because it had too many calories. My sweet mom sat me down, had me look at a nutrition label on some chocolate milk, and told me that my growing brain and body needed those calories, and that they were healthy and good. To this day, I freakin' love chocolate milk (thanks, mom). Also, when I read labels, I look for things like protein content, fat, and sugar to evaluate if it's something I want to be eating.

"Food is food and it can be used for fuel or pleasure, but it doesn't define my character."

While counting calories can certainly have its place, for many women, the sheer idea of it has also vilified different foods in our minds. I spoke with a woman named Brooke, who lost over 100 pounds — without calorie counting — and she summed it up quite well: "For so long I viewed food as a moral issue, like certain foods were 'good' or 'bad' and if I ate them I was 'good' or 'bad.' . . . But that's warped. Food is food and it can be used for fuel or pleasure, but it doesn't define my character."

Yet if we can't quantify our food to lose weight, what can we do? As it turns out, several things. Six women I've spoken to in the past few months have given insight as to how they lost weight, ranging from 25 pounds to 100+, all by making sustainable changes to their diet that have nothing to do with calorie counting.

Kara Hamill told us that calorie counting was never her key to success — and she lost 30 pounds in 4 months. "There is way too much stress involved with counting calories!" she told POPSUGAR. "I used to do it but quickly realized it was all I would think about all day. I eat clean Monday through Friday and dabble with some comfort food on the weekends."

This mindset and diet concept is called the 80/20 rule. There's no rigidity, no counting, just making better choices, most of the time. This can mean whatever you want it to mean. Are four of your five daily meals super clean, and the fifth is a cheeseburger or a dessert? Awesome. Are six days a week clean eating days, and on the seventh you eat what you want? Great!

The key is balance. If you're focusing on healthier choices for most of the week or day, the rest falls into place, and you never feel restricted, starved, or like you're missing out on certain foods. There's also ZERO counting involved.

Kara's refrigerator staples are things like spring mix organic lettuce, baby spinach, hummus, Greek yogurt, chicken breast, coconut water, and kombucha — all very healthy foods! But she loves "good food and wine," and saves those for date nights with her husband. Sounds like a good life!

Carrie McMahon was one of the first women who introduced me to the concept of counting macronutrients, or "macros." And since then, I've noticed that tons and tons of women are following this same diet concept, which focuses on the quality of calories versus the quantity: how many fats, proteins, and carbohydrates are you eating?

Counting macros is often referred to as flexible dieting, as it doesn't eliminate any food groups, yet helps you quantify your good choices and your "fun" choices, as trainer Brittany Dawn would put it. Brittany lost 50 pounds with this concept; you check the food to see "if it fits your macros," (IIFYM, as it's called in the fitness world) and go from there.

Brittany attributes her flexible diet to what helped her overcome anorexia athletica. "It's something I think many women deal with but are scared to admit," she said. "Flexible dieting was really the light at the end of the tunnel for me. It allowed me to incorporate foods that I enjoy eating without ever feeling restricted. Today, I'm binge-eating-free . . . almost two years . . . and I love the freedom of the dieting approach I take."

As mentioned, she refers to her treat foods as "fun foods," which is a really healthy and positive approach (much nicer than "cheat meal"). "I now incorporate healthy foods but fun foods, too . . . in moderation. It's all about balance."

"It wasn't until I quit the calorie counting that I finally gained a healthy relationship with food, my body, and my life."

Carrie had a similar binge-eating experience with restricting her calories. "I restricted my intake, counted calories . . . didn't allow myself to eat bread, pastries, cheese, chocolate, and all of the 'good stuff' except on my 'cheat day,' which was once a week," she said in her e-book, Why You Should Count Macros, Not Calories. "Well, my cheat days would almost always turn into an 'eat everything in sight' kind of day. This restrict/binge cycle led to guilt, and that guilt that completely took over my life and buried me in a dark hole. It wasn't until I quit the calorie counting lifestyle and picked up a flexible based diet through macronutrient tracking that I finally gained a healthy relationship with food, my body, and my life."

Brooke told us that a key to her over-100-pound loss was a combination of mindful eating and meal prep. "Being obese, the priority was changing my eating habits and beliefs about food," she said. By partaking in mindful eating, Brooke was able to slow herself down and control portions.

So how does mindful eating work? It's essentially just more conscious eating. You think before, during, and after you eat, and you eat more slowly to ensure you feel satiated at the right time (i.e., before inhaling your food like a vacuum while thinking about other things). The opposite of mindful eating is mindless eating, like eating at your desk, while you're driving, while you're walking, or while you're watching TV. Sound familiar? It's a surefire way to pack in extra unwanted calories. You don't have to count, you just have to slow down.

In the same vein, Brooke took her mindfulness and put it into her preparation for the week. "Preparing meals at home is one of the most effective ways to manage weight, but it has to be easy and enjoyable or it won't happen consistently." Make sure you're mixing things up when you're meal prepping to avoid getting bored with your food, and consider your healthier choices.

Focus on the Positive: Find Healthy Foods You Love

Every single woman I spoke to referred to this concept as the main idea that helped them lose weight. Starting with Brooke, her first "small step" to major weight loss was "adding a green vegetable to every meal." By finding these foods that she loved, she was replacing poorer food choices with healthier ones, without even thinking about what she was "cutting out."

Caitlin lost 25 pounds this way. When we asked her how many calories she eats per day, she had no idea. "I try not to count and to feed myself what feels good and not obsess over numbers," she said. What feels good to Caitlin? "tons of veggies, a smoothie bowl, protein pancakes, fruit, eggs, and maybe a little quinoa." Her daily diet is incredibly balanced, and she'll still have "a cookie or some fruit as dessert."

"I try not to count, to feed myself what feels good, and not obsess over numbers."

Focusing on the healthy choices you do love is far less paralyzing, and opens you up to a world of choices. By honing in on better foods that you enjoy eating, you'll thing so much less about what you "can't" or "shouldn't" eat. This positive approach to weight loss makes it much more sustainable.

Kat, who lost 40 pounds, had the same feelings. "I've never really tracked calories; it is definitely helpful for some people, but in my opinion it's all about making good choices," she said. "It's all about knowing what is good or bad for your body, being aware of what you're consuming, and as long as it's healthy calories, the weight will come off." Her favorite healthy foods are vegetables and greens, so that definitely helped in her success.

So take whatever approach works best for you, but know that if calorie counting isn't working, it's more than OK. You absolutely can lose weight without counting calories, and you'll probably have a better relationship with food as a result — but don't take my word for it, take theirs.