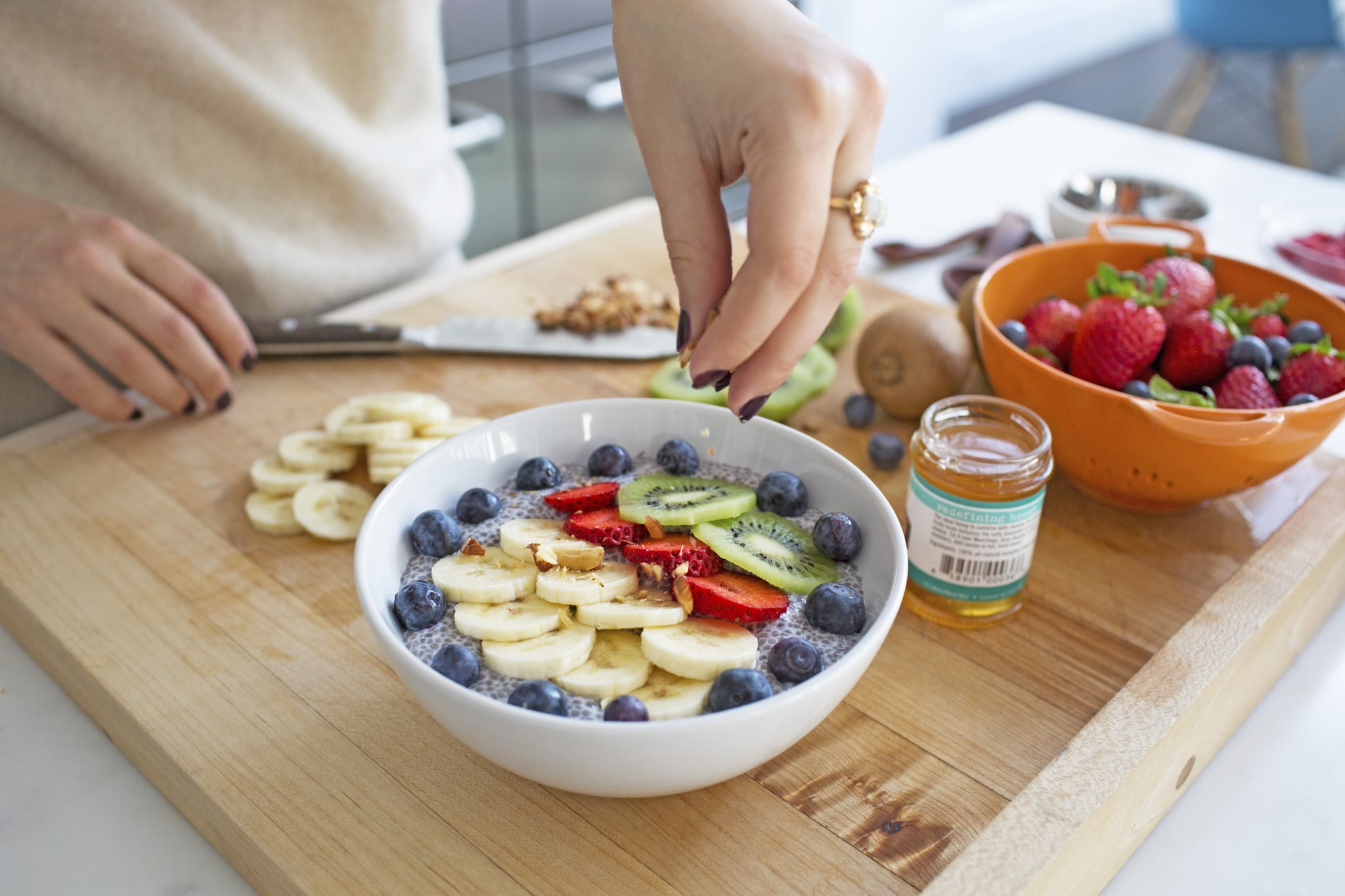 It feels like every other week there's a new diet trend or a buzzy new superfood that needs to make it into our morning power smoothie. Should we eat more fat or is a low-fat diet still optimal? Should we go keto or Paleo, and what the heck is the difference? These questions plague us daily, which is why we decided to reach out to the director of the Cleveland Clinic Center For Functional Medicine and New York Times bestselling author of several books on nutrition Mark Hyman, MD.

As a believer in using food as medicine, we asked Dr. Hyman to breakdown each of the major food categories and give us the "dish" on the latest nutrition research to help us make sense of it all. And you won't believe what he had to say about carbs!

POPSUGAR: Let's start with protein. Is the quality of protein more important than the type?

Dr. Mark Hyman: Protein is required to maintain and build muscle, and with loss of muscle (sarcopenia) comes age-related hormonal changes including pre-diabetes (which causes heart disease, cancer, and dementia), higher levels of stress hormones like cortisol, and lower levels of antiaging hormones like growth hormone and testosterone. That's why studies show that as you age, you need more protein to prevent disease and stave off death. The quality of the protein you eat matters most. Of course grass-fed and organic meat is a better option that conventionally raised meat. Non-GMO tofu is better than GMO "frankenfood" soy products.

MH: You'd have to eat a lot of vegetables, beans, and grains to meet your daily protein requirements. You would have to eat three cups of lentils to get the amount of the right amino acids and protein you get from one four- to six-ounce serving of meat, chicken, or shrimp. And as you age, you need more and higher-quality protein to maintain muscle mass and health. Plant proteins contains low levels of leucine, the rate-limiting amino acid for maintaining and building muscle, whereas animal protein contains high levels of leucine. It is possible to get a good amount of protein if you're on a vegan diet, but it is definitely a bit harder.

PS: What about those blasphemous carbs? Is there really such a thing as "good" carbs and "bad" carbs? Or are all carbs off the table?

MH: I have something surprising to say that might go against everything you've heard: carbs are the single most important thing you can eat for health and weight loss. In fact, I often say my plan is a high-carb diet. You see, "carbohydrates" encompasses a huge category. A hot fudge sundae and cauliflower both fall into the "carbs" category, yet they are entirely different foods. In fact, almost all plant foods fall into the carbs category. These are what I refer to as slow carbs, which are low-glycemic and don't spike your blood sugar or insulin. These slow carbs come loaded with nutrients, fiber, and amazing molecules called phytochemicals.

PS: What about grains — are they healthy for us or not? Because the Food Pyramid seems to think we should be consuming lots of them, while others in the health community debate their value.

MH: For millions of Americans, gluten creates inflammation, autoimmunity, digestive disorders, and even obesity. But do all grains cause a problem? Even though we started consuming grains recently in our evolutionary history, they can be part of a healthy diet, but not in unlimited amounts. Any grains can increase your blood sugar. And if you eat any flours made from grains, you might as well be drinking a soda. Stick with small portions (1/2 cup at a meal) of low-glycemic grains like black rice or quinoa. That said, for type 2 diabetics wanting to get off insulin and reverse their diabetes and those with autoimmune disease, a grain- and bean-free diet could be a good experiment for a month or two to see how it impacts health.

PS: OK, let's talk about the next hot topic: fat. Would you say fat is more friend or foe for optimal health?

MH: Fat is our friend! But the type of fat you eat matters! Almost everyone I know — doctors and patients and eaters alike — are all confused about fat and still hold on to myths and misinformation that prevents them from taking advantage of the latest science to lose weight and get healthy. You're likely familiar with many of them: fat makes us fat, contributes to heart disease, leads to diabesity; saturated fat is bad; vegetable oils are good . . . I could go on, but I think you know what I'm talking about. None of these beliefs about fat are true. The right fats can help you become lean, healthy, and vibrant. These are foods like wild fatty fish, nuts and seeds, olive oil, avocados, olives, and grass-fed meat.

PS: But what about that coconut oil study stating that high saturated fat is unhealthy for us?

The study in question was based on a review by the American Heart Association (AHA). They published a review of fat and heart disease. The AHA has been at the vanguard of bad advice for decades since they first hooked onto the "fat is bad and will kill you" meme. They told us to eat very low-fat, low-cholesterol diets and to eat tons of starchy carbs. By the way, the AHA gets huge funding from cereal makers that put the AHA seal of approval on sugary (including cereal makers) cereals because they are "fat free" despite containing 75 percent sugar. Except now the overwhelming amount of research has proved that idea to be dead wrong. In fact, their recommendations have killed millions of people (no joke) from heart disease and diabetes. That's why the very conservative 2015 USDA Dietary Guidelines removed any upper limits on dietary fat and eliminated any restrictions on dietary cholesterol. In fact, after decades of telling us to avoid eggs and shrimp they said, "Cholesterol is not a nutrient of concern for overconsumption."

If you are interested in the corruption of the AHA (its funding is supported by the Pharma industry, industrial food giants including sugary cereal makers, and industrial vegetable oil manufacturers), then read this recent blog on Medium entitled, Is the American Heart Association a terrorist organization? I'm not calling the AHA a terrorist organization, I just want you to read the article and question who's really pulling the strings. There's a lot to say here, but for more about this topic, read this blog.

PS: What about keto and Paleo diets that recommend high fat — yea or nay?

MH: Ketogenic diets and Paleo diets can work well for some people. Other people need to eat more carbohydrates. Diet should be personalized.

PS: Sugar has been a big area of focus for a lot of your books. Would you say that all sugar is bad? What about natural-occurring sugar (in fruit, for example)?

MH: We Americans have so many ways of saying "added sugar." For the most part, you won't find these in your cupboard — they're nearly all ingredients used in processed foods. The New York Times compiled a list of 90 such terms you might find on labels, all of which are just different kinds of added sugar. Fruits are great, but I don't think we should go overboard on them every day. The best ones are low-glycemic fruits such as berries. Small amounts of maple syrup, stevia, coconut sugar, and monk fruit are also fine. Again, these should not be staples in the diet.

MH: We still don't know everything there is to know about stevia and its effects on the body, but I think small amounts of organic stevia in pure form are OK. I would avoid the ones that have added sugar alcohols and other weird ingredients.

So, What the Heck Should We Eat?

It looks like protein, carbs, fat, and sugar are all OK to consume in moderation, just nix the overly processed and added artificial ingredients. In other words: eat real, whole foods. Load up on greens and healthy veggies. Take in moderate, high-quality protein. Fat is OK, just make sure it's the healthy type of fat. Sugar isn't the total devil, just opt for small amounts of naturally occurring sugar in nutrient-rich foods, such as berries, and be mindful to avoid blood-sugar spikes.

According to Dr. Hyman, there's really no one-size-fits-all approach to living well. To reiterate his point, "diets should be personalized." And "diet" simply meaning the way we eat, since an important part of changing the diet dialogue is redefining that word to mean what it truly is: a lifestyle.Dr. Hyman digs further into the science behind the food we eat in his book, Food: What the Heck Should I Eat?, helping us take our health back into our own hands by getting the latest research with advice straight from the doctor!