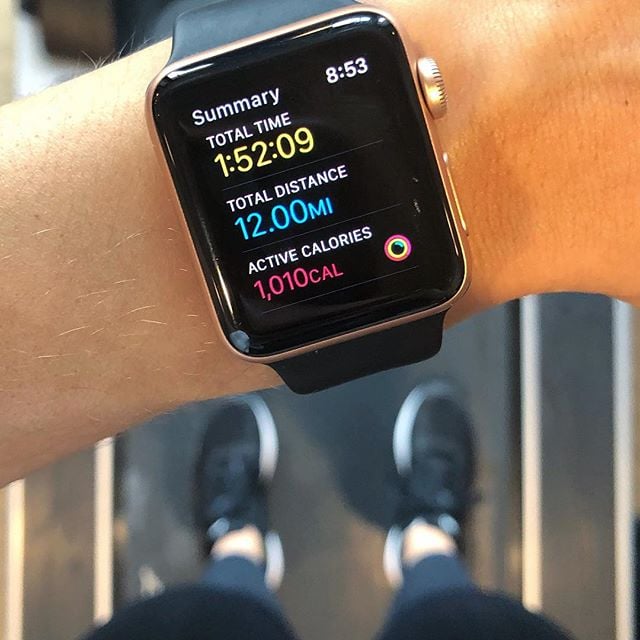 It feels like yesterday that I could barely run a mile on the treadmill, when in fact, it was about 10 years ago. The scene: Planet Fitness in suburban Connecticut. My brother, four years my senior, to my left. As I trotted along at a 5.5 mph speed, I barely crossed the five-minute mark when I stopped, gasping for air. As he continued along at a sub-eight-minute pace, I felt defeated. Tears welled up in my eyes. I felt like I was nowhere near good enough to be on that treadmill, especially alongside someone who succeeded by exerting minimal effort.

Since then, a few things have changed. Flash forward to a 70-pound weight loss and five marathons, and I think it's safe to say that I'm much, much better with my love/hate relationship with the treadmill. Still, it's never completely felt cozy. For years, the moment I've stepped foot on the treadmill, I've been unsettled. I dreaded every mile. I'd subconsciously get that inadequate feeling back. Despite having crushed hundreds of sprints and miles on the machine by now, I've always felt restless — until recently.

Call it an emotional shift, maybe. The cosmos aligning. Something to do with my zodiac. Whatever the reason may be, about three months ago, I started to actually enjoy my time on the treadmill. A new podcast listener, I'd download a new episode and just begin. On average, I'd log in a 5K each day at Equinox. Just long enough to make a dent in some audio content, learn a few things, and continue on my way. And it wasn't that I was just on the treadmill leisurely plotting along. I was running fast. As in, sub-eight-minute miles. Something clicked. Something felt right. I felt refreshed and ready for anything.

And then the really unexpected happened. Through my work, I was able to get a bib to the upcoming Boston Marathon. An April 16 race day meant one thing: a lot more treadmill time. Every marathon I've ever run has been in the Fall, translating to Summer training months. So there I was with a decision to make. In the wake of my new love affair (I can't believe those words are flowing from my fingers) with indoor running, I accepted the opportunity of a lifetime to run in one of the most coveted races in the United States.

The training plan varies from week to week, but I'd say I'm doing about 75 percent of it indoors. And while I'll try to get out into the cold for my long run on the weekends, just to get in some variety, I find myself going to the gym to really focus on pacing for any distance under seven miles. That's because, there inside my little nook, on my treadmill, I make the rules. No need to wait for a natural hill. I make my own. I pick the pace and I hold myself accountable. This is something my Precision Running coach Kevin St. Fort said, and it comes in handy when you're trying to break your personal record.

You want to know the craziest part of all this? I feel like crushing this record is really in my reach because I'm using the treadmill. Because I'm staring down something that's been a weakness for so long. Most days, 9:15-pace miles feel slow. Instead, I hop on the belt and automatically crank it up to a 7.5 mph, which is an eight-minute pace.

Traveling last weekend, I did something I never in my wildest dreams thought I could do: 12 slow, steady treadmill miles. When the belt stopped after 1:52:09, I stood there, breathless, and cried. This time, though, they were tears of joy — not defeat.