Divorce is not exactly a walk in the park. If you thought planning your wedding and getting your bridesmaids ready for that walk down the aisle was tough, it doesn't hold a candle to splitting apart your life, and sometimes a child's life, like divorce does. Even the easiest divorce can be unnerving. When my soon-to-be ex-husband and I decided to separate, the world spun. How was I going to care for my child as a single parent? At the time, I was job hunting for a full-time position while working part-time. I wondered if I would be able to provide for my daughter financially. I wondered how she would cope. I wondered what the future would bring. Divorce brings upon many new changes and "what if" scenarios. I needed to find a way to clear my head when the noise inside of my brain and heart became too loud.

Let me not forget to mention that when my marriage started to crumble, my daughter was two years old. We didn't make the clean cut until almost a year later. Still, I had a young child and had just been pregnant not so long ago. I was back to my pre-baby weight and slimmer than before, but I had gotten lazy at the gym. I did my routine but never pushed myself and simply went through the motions. My workout was an unispired habit, like having a morning cup of tea. The thrill of fitness was gone. And the thrill of fitness wasn't the only thing that had "left the building." As the marriage decayed, so did the sex life. Most of the time I felt invisible and as if I had no sex appeal. This was unusual; I had been very confident of my sex appeal before marriage, albeit a little self critical. But at the point in which we said, "It's over," I didn't feel like a woman and a mom — just a mom without any feminine allure. I wanted to feel excited again. I wanted to be out in the world, not only as a mom but also a woman.

That's when running walked in. (Did I just say that?)

As a kid, I was coordinated but I wasn't the first kid you picked for dodgeball. I was able to move and get by, but I never considered myself athletic until I got older. I still hesitate to say athletic and instead would say "fit." Running was never a passion of mine. I figured I could get by walking and using the elliptical machine, but now I wanted more from my workout. I wanted more from life. I didn't want the status quo, but instead, I wanted the best for myself and my daughter. I wanted happiness.

It started on a treadmill and then when I went out with someone for the first time after my separation, unnerved about being in the dating world again, I hit the pavement outdoors. I was a part-time employed, soon-to-be single mom with a low income, a large amount of student loan debt, and a huge question mark of a future in front of me. Those details didn't matter though when I put on my sneakers, sunblock, exercise gear, and earbuds, ready to face the trail around my local reservoir and all the dogs, moms, and couples walking and running alongside me.

There were many times I ran through tears. Sometimes it felt as if I were running away from my problems and my life. From myself. I remembered all the good times in my marriage and I thought of the bad times too. I remembered hitting the reservoir trail when my daughter was an infant in her stroller, enjoying the fresh air, feeling human again even with my weak post-partum core (thanks to a C-section) and my leaking breasts (thanks to breastfeeding). Here I was again, but my daughter was with her dad during his parenting time. Now I was keeping up with the wind without her.

I was alone, yet I wasn't lonely.

Running is a companion in itself. The movement, the air, the soundtrack — they become your friends whether you've run one mile or three, whether you give up and start walking or whether you pound through your fatigue and trudge ahead. Running was the silent, steady, true companion I needed to remind myself of who I was before marriage and who I could be after marriage. It was the free therapist I sought counsel in. It was the way I found answers to problems and how I calmed my fears. Running was the one partner who told me without wavering: "You are strong. You are sexy."

Running told me: "You can get through this divorce even, if for today, you believe you can't." I hadn't known I needed a cheerleader to get me through divorce, but I did.

After a brief time, that running translated into energy and that energy infused my workouts. I started increasing my weights at the gym and requiring more of myself. In a split second, I wasn't simply thin — I was slim and toned and not too shabby looking for a late-30s soon-to-be divorced mom.

I can thank it all for the one time I thought to myself, "Let me try this."

Today, I am still not a marathon runner and have never made it to a 5K, but it's still the one thing almost two years later that turns off the noise in my brain, giving me clarity and peace. It's the best gift I have given to myself since saying "I don't."

Coronavirus
Worried About Running in a Face Mask? Here's Why a Doctor Says It's Safe — and Recommended
by Maggie Ryan 27/8/20

Women's Health
If Being Body Positive Doesn't Feel Right to You, Maybe Being Body Neutral Will
by Jenny Sugar 11/3/20

Popsugar Interviews
Can You Do Intuitive Eating and Lose Weight? Dietitians Say Maybe, but You're Missing the Point
by Jenny Sugar 05/2/20 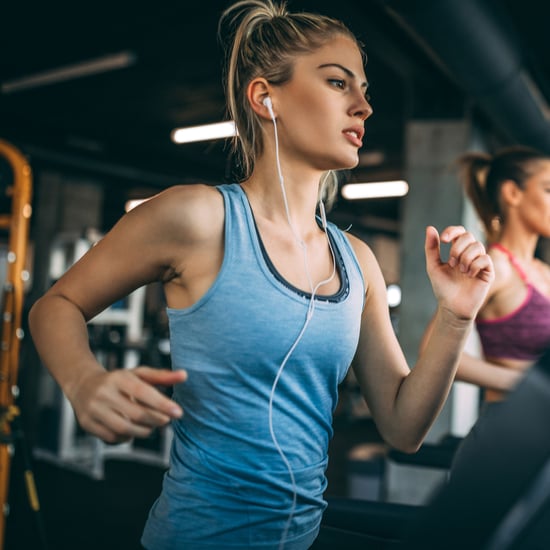 Walking
Walking or Running, Here's How Long You Should Hit the Treadmill to Actually Lose Weight
by Maggie Ryan 06/2/20

Gada Get Fit
This Fitness Expert's Advice Will Make Running Your First 10K, a Total Breeze
by Kate-Lynne Wolmarans 21/1/20