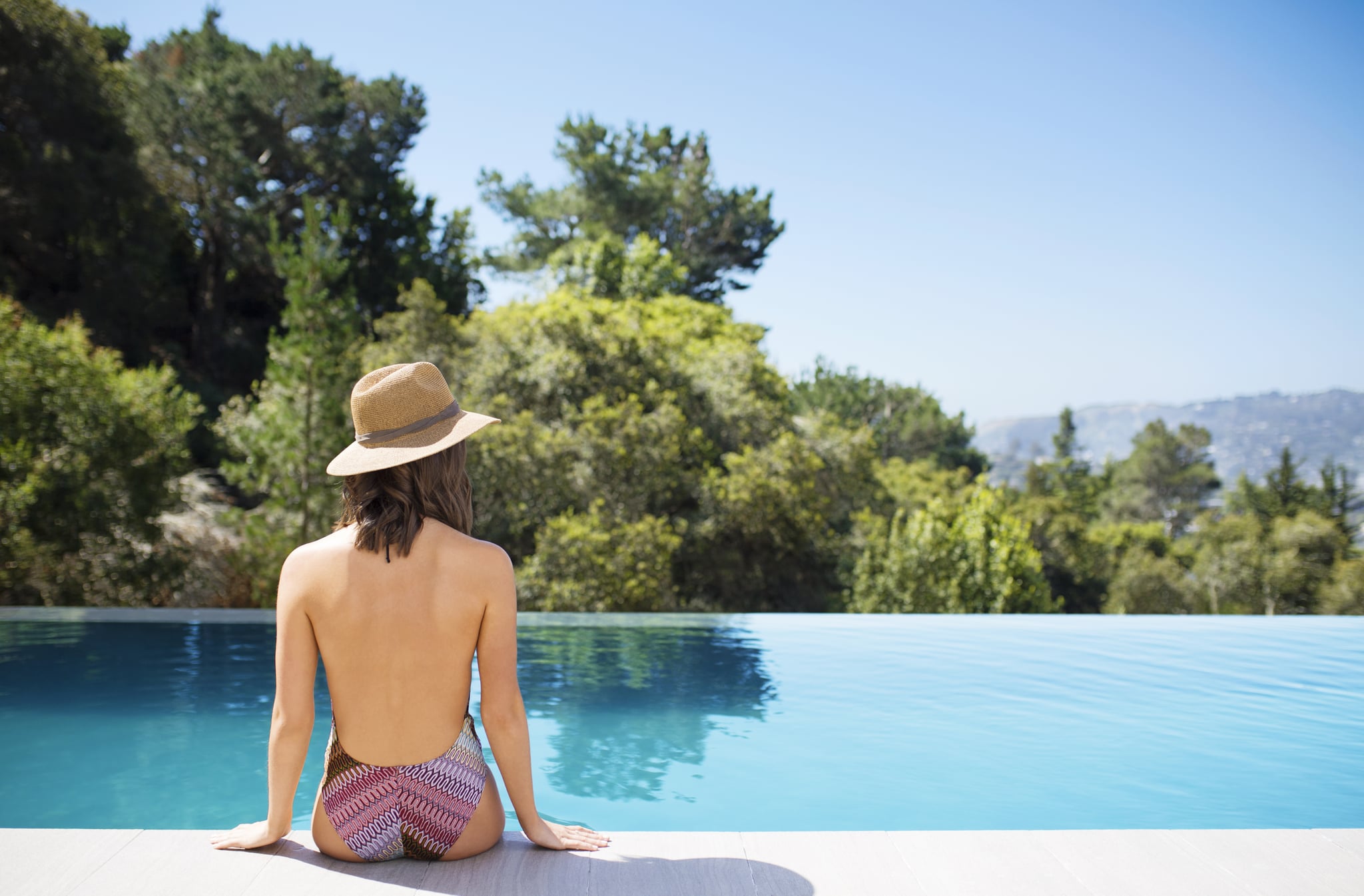 I'm the kind of person that's always on the go. The thing is, living in New York City, there are so many opportunities to be constantly moving. From early morning yoga class to a coffee meeting, from coffee meeting to the office, from the office to a dinner date, from dinner date to OMFG get me to bed. And while it's one thing to live a nonstop lifestyle in the comfort of my own city, it's a whole other beast to take it on the road.

When a series of invites came my way that culminated in what would be a month of travel, I knew things were about to get interesting. On the agenda: Albuquerque, Hartford, Austin, Los Angeles, and Palm Springs — all within a 30-day span. Sounds like a blast, right? Right. But, here's the thing: travel can be a wreck on progress and stressful. I'm Italian, which means indulging is in my blood. I'm also really active, which means I knew that indulging for a month straight with no activity was not an option. I was on a mission to not wreck my body and mind in the process.

Related:
How I Beat Jet Lag After Crossing 9 Timezones and Traveling 12 Hours 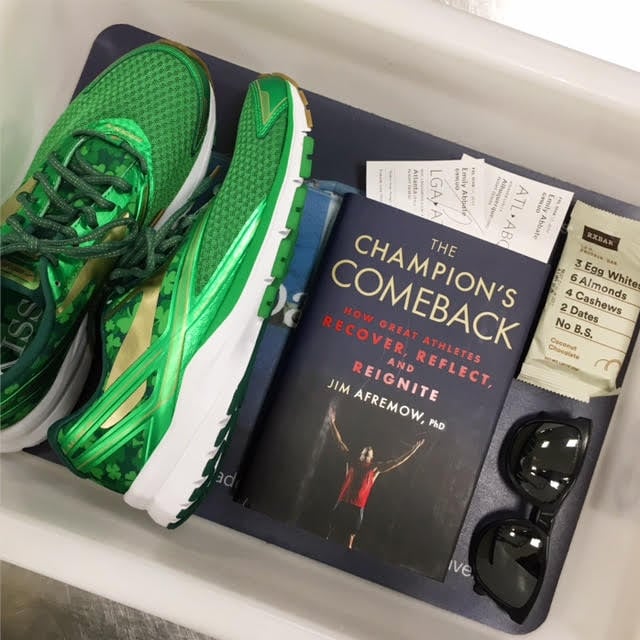 My flight to Albuquerque, the first stop on my US tour, was early morning. Standard practice for me at airports usually involves ordering an iced coffee and some sort of egg sandwich at Starbucks. Not this time around, buddy. The night before my trip, I did a quick grocery stop, grabbing a yogurt to eat for the cab ride to the airport, as well as some RXBARS to eat throughout the trip — especially in lieu of the oh-so-tempting Jet Blue blue chips. I felt strangely proud of myself for turning them down and even more proud of myself that I reached for an apple as soon as I got to my hotel (and tossed another in my bag for later). I realized that having these smaller items available to me for when hunger kicked in helped prevent me from overdoing it at meals, especially after logging a slew of miles on both days in New Mexico.

This preparation stuck with me from Albuquerque to Los Angeles, which lead to a road trip to Palm Springs. Roughly a three-hour drive, I was determined NOT to stop at In-N-Out, SmashBurger, [insert name of other popular West Coast chain, here]. So, my girlfriend and I prepped a bag, full of everything from chicken sandwiches and fruit salad to copious amounts of water (another thing I'm guilty of skimping on during vacation). To be honest, I didn't even feel tempted to stop because I was amped on our healthy eats.

2. Pick a drink, and stick with it

Oh, travel and alcohol. Austin was the first spot on my journey where drinking constantly was an option. Not only did I have a fair amount of free time by the pool but I also had a group of guy friends from college in town for a bachelor party. Translation: "Let's drink!" I made the decision to treat myself to two drinks maximum during the day. Since it was warm outside, I didn't want to be guzzling alcohol in place of water. For those two drinks, I chose rosé instead of the frozen temptations on tap. 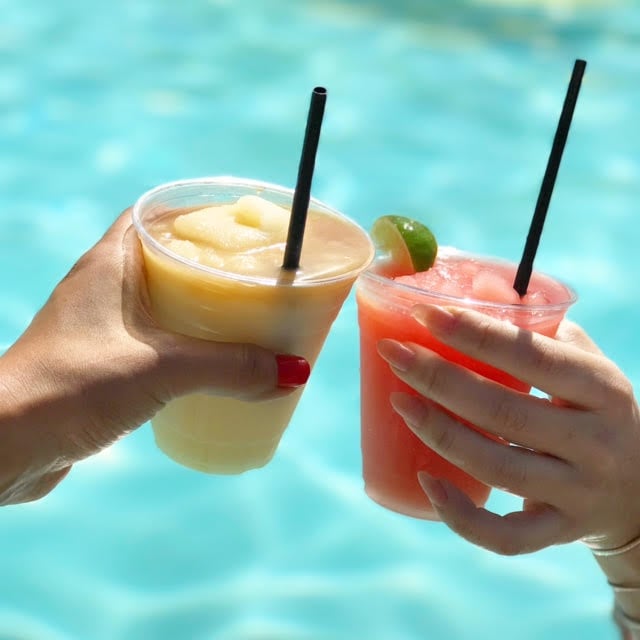 The same temptations happened in Palm Springs. This time around, in 90-degree heat, I treated myself to a piña colada (when in Rome) as I soaked in the fun Ace Hotel vibes. But after that, I was smarter about my strategy. Doing a little more play than work while there, I made sure to choose single liquor options, which boast far fewer calories than mixed drinks and other warm-weather favorites.

3. Find time for self care

Lately, I've been on this self-care kick. I was determined to bring my essential rituals on the road with me. Writing in a journal every morning before starting my day, in silence, has been a game changer. Whether it was at 5:30 a.m. for a trail run in Albuquerque or 7:15 for an early morning breakfast in Hartford, I made sure to set my alarm a smidge earlier to give myself some quiet time.

That time also translated to the car mid-California road trip. It wasn't until I got settled and hit a 100-mile stretch of highway that I realized just how therapeutic the sound of silence could be inside the comfort of my rental Buick Encore. Granted, it had been a few years since I took a legit road trip, being that I'm a New Yorker and all who sold her car five years ago, but I never remembered it being this quiet in a cab. Turns out, Buick uses an Acoustic Laminated Glass that helps block outside noise and some sort of active noise cancellation that counteracts engine noise. Hello, mental solace. Having that time to Zen out made me ready for whatever, and whoever, crossed my path.

4. Activity doesn't have to happen in bulk

While New Mexico and Austin both allotted me chunks of time in my schedule dedicated to fitness, like stand-up paddleboarding (FYI: A mile of SUP is no joke), and biking, Connecticut and Los Angeles were the complete opposite. Being on the West Coast worked in my favor, as my internal clock had me up and functioning with the sun. My early morning habit allowed me to sneak in some morning miles or a quick HIIT workout.

The reality, though? I didn't want to spend large chunks of time working out on these trips. The solution? Quick, app-based workouts I could do in the comfort of my hotel room or by the pool, at an hour when other people weren't staring at me like WTF. My go-to choices, including Aaptiv, Fitner, and Sworkit, had great options for different scenarios. While Aaptiv offered yoga flows for those mornings where I may have had one-too-many glasses of rosé the night before, Sworkit provided a slew of bodyweight workouts that could be done in under 15 minutes. Even those quick burners made me feel like a more productive human for the rest of my day. 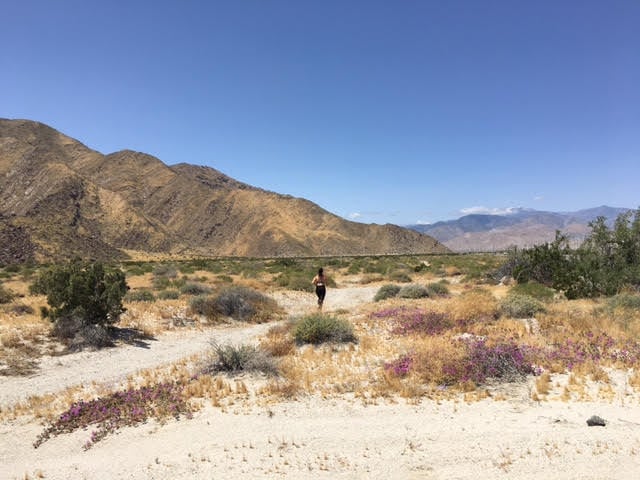 5. Stay at a hotel that's on the same page as you

In and out of five different hotels during the month, I hands down couldn't get enough of the Westin I stayed at in downtown Austin. If I didn't want to do a session in my room, I could head up to the gym that lead me straight to the roof deck pool. Postworkout, they also had everything I would have wanted back in New York City: pressed juices, bikes available to flush out my legs, and breakfast options that didn't make me feel like I totally wasted my time working out in the first place. The provided gym clothes, that they also offered to wash, didn't hurt either. Not around a Westin? Don't worry: loads of other favorites are jumping on the healthy stay bandwagon, including Even, Hyatt, and Dream Hotels.

Travel and expenses for the author were provided by Buick and The Westin for the purpose of writing this story.