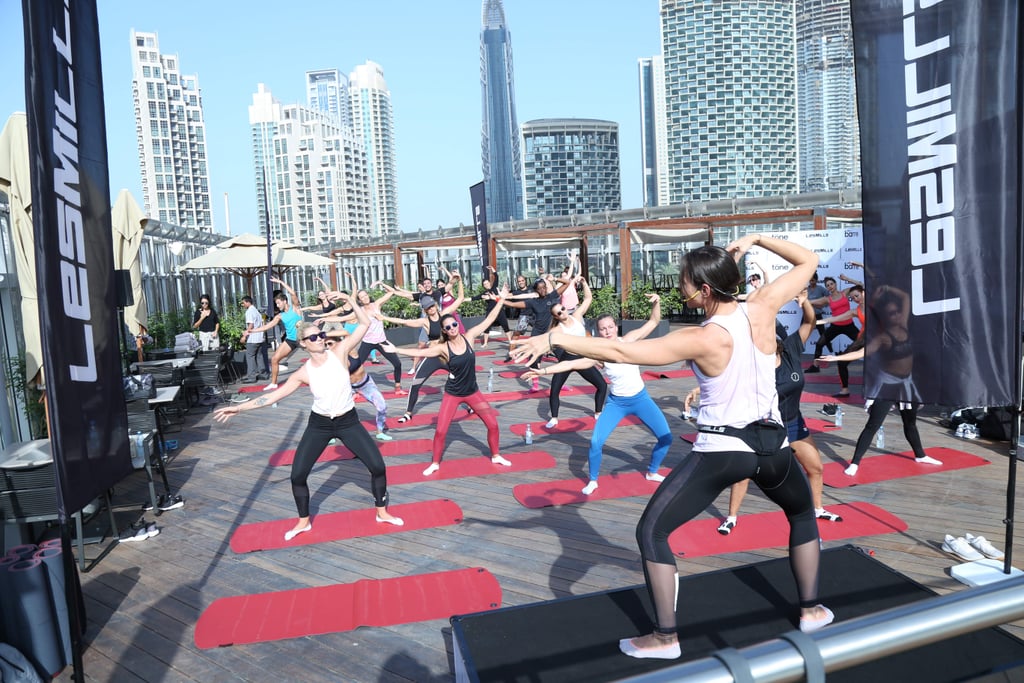 Les Mills Now Does Barre and Tone Classes, and Your Butt Is Gonna Thank You For It

They've brought us the bicep-busting BodyPump and, of course, BodyCombat has kept us fighting fit, now Les Mills is really coming for our asses, quite literally.

The New Zealand brand, loved by Nina Dobrev (and apparently so many people in the Middle East that they held this huge workout class recently) thinks they can help you get a body to rival a ballerina by doing their 30-minute classes regularly.

So I headed down to the swanky Burj Club rooftop to try out a session. With Les Mills coming from a four-time Olympian, Les Mills Snr, who was I to come in feeling cocky as I prepared for the session full of arabesques, attitudes, changements and ALL the various feet positions? You can tell I have a dance background, can't you?

Well, you wouldn't if you were in the class with me! It totally challenged me and various other fitness media and influencers who attended.

Compared to other barre classes, well, we didn't have a barre to start with but that may have just been down to the gorgeous outdoor set-up, which included views of the glistening Burj Khalifa. Unlike classes such as Physique 57, Les Mills Barre uses much more technical dance terms and makes your feel like you actually take on someone who was brought up doing ballet once you get the swing of the classes (well, almost).

Not only did my arms and derriere feel sore after the session but even during it they were burning so much that I had to take mini breaks. Even my fellow classmates who specialize in fitness were sneaking off the sides at times, so I didn't feel too bad. From my past experiences with them, (I'm on GuavaPass), I should've known Les Mills certainly doesn't play around! They even use weight plates in their barre class. But for some reason I always think workouts you don't have to wear shoes for aren't as difficult.

To make matters worse, before the session we tested out 30 minutes of another new class from the brand, Les Mills Tone. Using a smart band, those stretchy bands you often get in barre classes and gyms to help you stretch and challenge your muscles by providing more tension, our usual bicep curls felt like fire.

Although barre did make me sweat, Tone really got my heart rate pumping and forced me to stop getting carried away with my thoughts, thanks to some step sequences that really make you focus on getting it right, rather than than how much it hurts. Shoes on for this one.

"Les Mills have some amazing new products launching this year designed to inspire as many newcomers as possible into exercise, the first of which are our Barre and Tone classes. The Middle East will be one of the very first regions in the world to launch these amazing new programmes." Glen Stollery, Director of Operations, Les Mills Middle East and India, said. "We also have some other very exciting news that we will be announcing in the coming months, so watch this space!"

If it's anything like what I just tried, I can't wait to see what else they have in store!