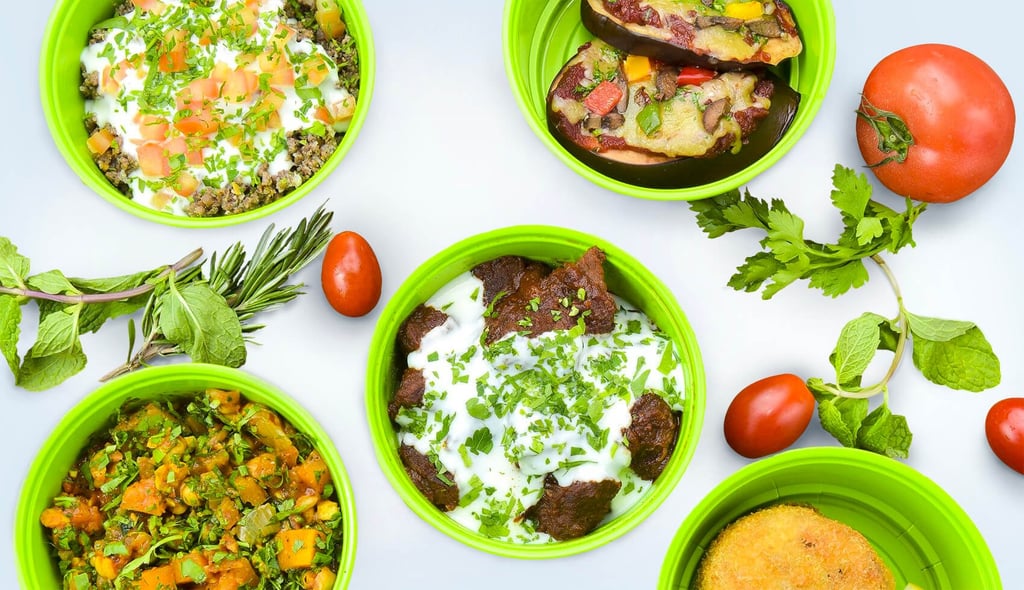 I've tried high protein diets in the past, such as Atkins and Dukan, but as I'm sure you've heard before, they can at times feel extreme and mean saying goodbye to even some of your favorite healthy foods like fruits and veggies.

So, when I heard about The Lunchbox's Low Carb plans, I jumped at the chance to try out what it would be like eating two meals a day, five days a week.

Here's what I learned:

1. It's totally possible as a vegetarian

First of all, there's a difference between eating high protein and low carb, so filling and fibrous veggies were all over the menu.

As well as including yummy dishes like chicken meatballs, beef teriyaki and Italian chicken cacciatore, there are so many options for pescatarians (parmesan crusted salmon or white fish curry) and vegetarians.

Each week, I was given an option of six mains and six sides, and while some of the vegetarian options aren't as high in protein as a dish like beef teriyaki (34.57g), I was delighted to find that things like cheesy black bean chili had 16.4g and cauliflower mash with garlic had 20.24g. That's higher than the salmon (11.98g) and white fish (12.58g)!

So I could totally do the plan as a vegetarian if I wanted to (although it could get repetitive) something I'd have no chance of on the original Atkins diet.

I wasn't weighing myself during the plan so I only had my eyeballs and the fit of my clothes to go by. Within the first week of eating dishes such as cauliflower veg slices and cauliflower rice (yes, there's a lot of cauliflower in the plan) my bloated stomach got noticeably flatter. Now, as someone who usually equates eating a low fat diet with looking and feeling good, I learned I was wrong. My portion of cauliflower rice had 18.27g of fat and 211.31 calories in, and it's just a side. The same goes for the cauliflower mash (by far my fave dish on the menu) which had 33.72g of fat and 402.88 calories.

So, I was provided with two meals a day for five days each week, meaning the the rest was up to me to behave. During the whole plan I was pretty much intermittent fasting, skipping breakfast and eating my lunch and dinner at work, so I had an eight-hour window to chow down and 16 hours for my body to digest. It was no wonder my gut was much happier. The first weekend I holed myself up, which was quite lovely, but I couldn't spend every weekend alone for a month so avoiding carbs become tricky.

Needless to say, Fridays and Saturdays eventually saw me eating and drinking things that were definitely not acceptable and soon enough those trousers weren't so loose anymore come Sunday.

4. You need to know your macros, micros and everything in between

One thing I wish I'd had was a nutritionist who could help me pair mains with sides and figure out how much was too much each day. While there are many lower fat and calorie dishes like the cauliflower tabouleh (0.48g fat and 80.28 calories) or the Greek salad (6.92g fat and 87.18 calories), I found myself going for fattier pairings like the chicken meatballs (30.66g fat and 361.4 calories) with Brussels sprouts and turkey ham (11.38g fat and 229.62 calories). They just tasted so good!

I eventually figured out that some of the meals I was creating added up to 700 calories or 63g of fat! That's my recommended daily intake gone with just chicken meatballs and cauliflower mash. It's not so bad when sticking to the plan strictly but if you're eating outside of it, you need to be careful.

5. It's one of the most reasonable meal plans around

I've tried a few diets delivered to your door and they're generally very expensive. But this works out to be about AED38.5 per meal and it's so easy to order. I simply filled out a document every week which contained a drop down menu of choices. Each day, your carb intake won't exceed 100g and the ingredients are listed underneath the tub (something it literally took me three weeks to discover).

I would recommend the plan to friends (and have done already) but if you're doing it to lose weight or tone up, you need to know how much protein and carbs you're required to consume according to the lifestyle you lead. Alternatively, if you find that you can never get away from your desk for lunch and don't want the hassle of deciding what to eat everyday, this is a perfect option.

Check out lowcarb.ae for weekly and monthly packages.