If you've been following along on our Instagram story series "You Glow Girl," you've probably already seen the amazing and wild wellness treatments and trends we've been trying . . . one of which was fire cupping! Recently I visited the gorgeous Four Moons wellness center and spa in San Diego to learn more about fire cupping and get my very first treatment from Tiffany Crocker, L.Ac. She shared all the details with POPSUGAR, describing to us this "ancient medicine that is now cutting edge" (and totally trending in the wellness world).

What Is Fire Cupping?

Acupuncturists have been practicing cupping treatment for centuries. This form of traditional Chinese medicine (TCM) has been used on Olympic athletes and professional athletes and regular people like you and me.

As the name indicates, the practice is centered around the use of cups (depending on the style of cupping, they'll be glass or silicone cups) that are placed on certain parts of the body, and it's used for anything from recovery from workouts to healing a sickness.

What Are the Benefits?

According to Tiffany, there are TONS of reasons to try cupping, including:

How Does It Work

Cupping is like a reverse massage; instead of pushing into the tissue, it pulls. It feels similar in intensity to a deep-tissue massage, but it's not painful. "Cupping pulls from under the fascia layer," said Tiffany. "It loosens phlegm for a cough or congestion and detoxifies; it also aids in circulation of blood and lymph, increases blood flow, removes toxins, and brings in fresh oxygen."

With fire cupping in particular, the acupuncturist uses glass cups and flames to create suction; they place the cups on certain parts of the body, depending on what the desired results are, and may slide some of the cups around. They're left on for a brief period of time, then released. The procedure is relatively quick; I believe mine was a little under 30 minutes in total.

There are many types of cupping, but fire cupping is the most traditional, original form of Chinese medicine. It uses glass cups (also traditional) and the fire "creates a better suction with glass cups," as Tiffany explained. Fire cupping removes the "cold" in the body — cold is considered one of the "evils" in Chinese medicine of which practitioners aim to rid the body.

Tiffany also noted that "practitioners prefer to use the elements in their practice," (herself included) and that "heat is nourishing for people who are drained and tired." So fire cupping could give you the boost you need!

What About the Marks? 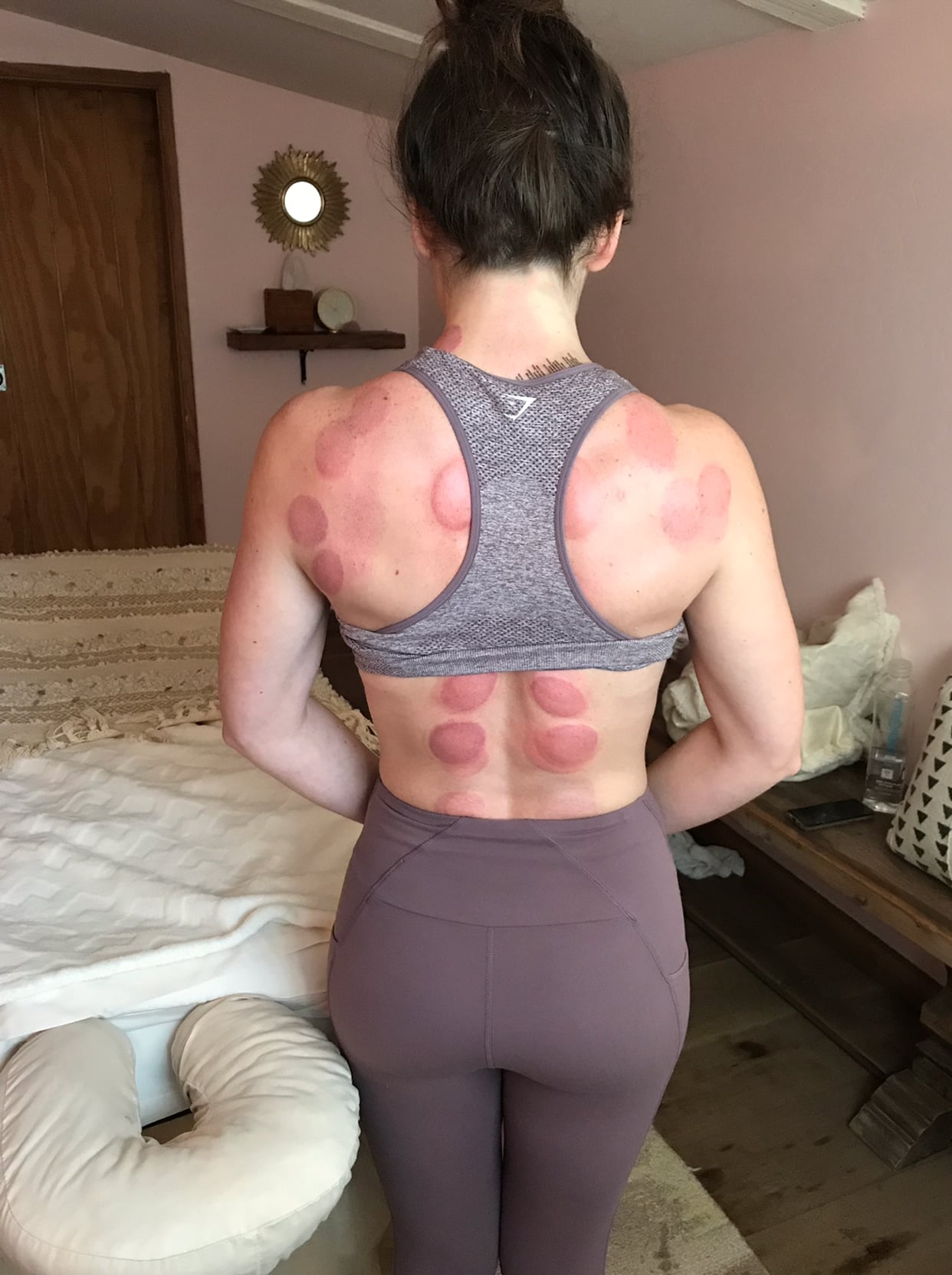 One of the things that freaked me out the most was the bruising and marking I'd seen from cupping. Let me just say straight away: it doesn't hurt! Some people are like me and a little spooked by the idea of the bruises, while others think it's cool and (in a somewhat uninformed fashion) actually want the marks. Tiffany said some people want the visible proof that they've done a "cool, trendy wellness treatment." But Tiffany warned that you shouldn't "aim for marks," because the practitioner could be cupping too hard with too much suction in order to achieve those marks, leaving the patient depleted.

Whether or not you have those deep purplish circles depends on your body and your blood flow, it's "not necessarily a sign of how well the cupping treatment went," she said. Do you have lots of qi — or energy — and vitality? You might have darker marks. Are you anemic or elderly? You'll have less visible marks (typically). Tiffany described her son — a young, healthy surfer with a lot of qi — who went in for a treatment from his mom and was blue and purple all over after it was over.

But don't plan to wear a backless dress the day after cupping! The bruising "heals within a day to a week, depending on the person," she told me. But you'll want to keep the marks covered while they do heal . . . more on that next!

Your after-cupping care is superimportant to ensure you stay healthy and reap the benefits. "Cover the area completely," Tiffany said. Opt for long sleeve, cowl neck, or turtleneck sweaters. Though there's no pain from the bruising, it's a vulnerable, exposed area, so she noted you should treat it somewhat like a wound.

You'll also want to stay warm and very hydrated. Drink extra water. Tiffany mixed up a hot adaptogen latte for me to nurse after my treatment, and I got cozy in an infrared sauna before heading home. She said, "Don't go swimming," but DO take a warm shower.

You may feel a little fatigued after a treatment, which is normal. Tiffany suggested waiting at least 24 hours before you work out again. Take that recovery time!