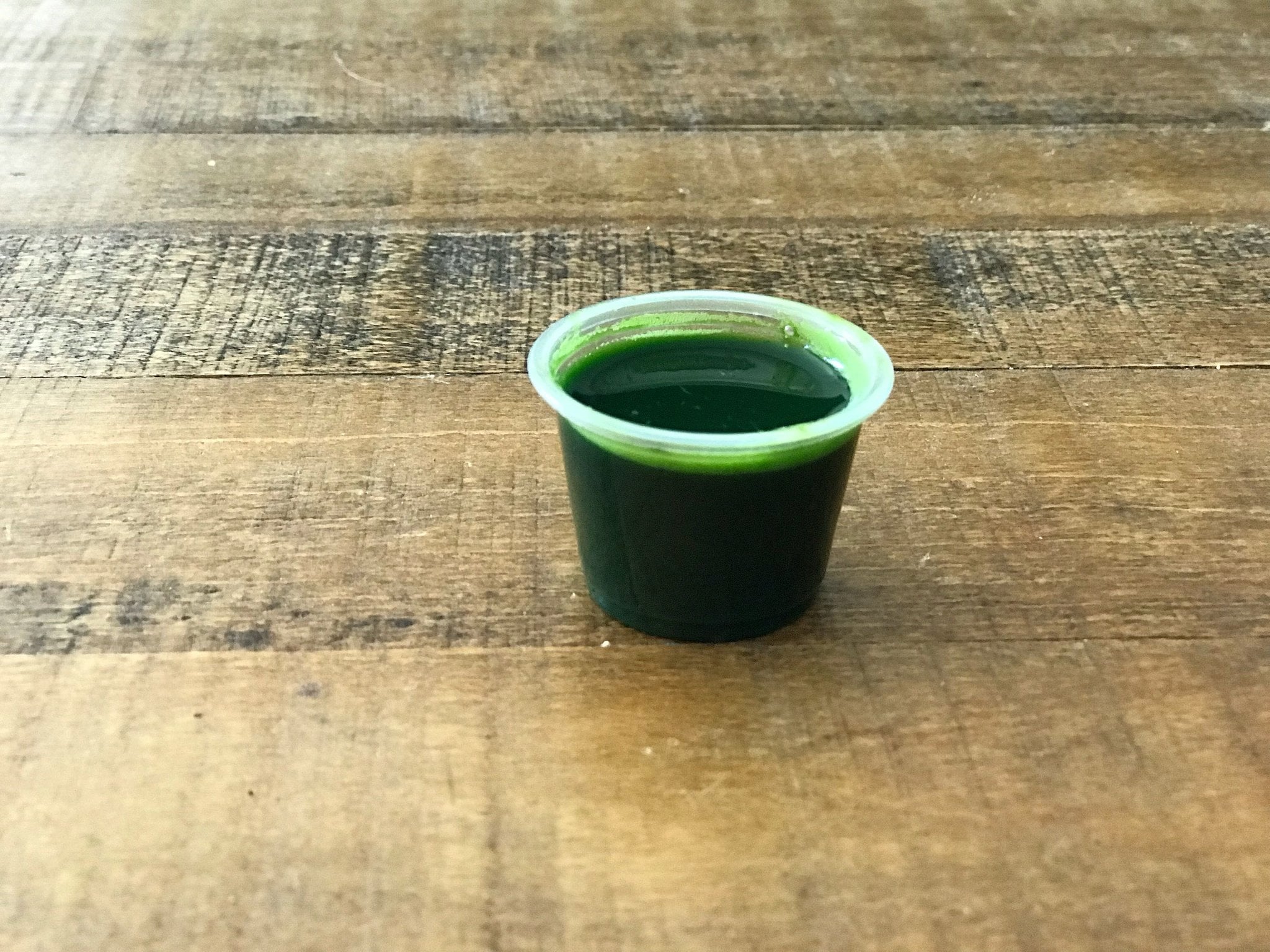 Praised by many as a superfood, wheatgrass is made from the freshly sprouted leaves of the wheat plant. I've seen signage at juice shops across the country touting the myriad benefits — it detoxes your body, supports your immune system, makes your skin and hair glow, etc.

I've been a sporadic drinker of this dense green juice for years, mostly after one too many margaritas the night before or an excess of fatty foods. I know the health gurus claim that you need a shot a day to really get the full benefit, but I'll be totally real — the taste is anything but pleasant. As its name suggests, wheatgrass tastes like, well, grass. So since it's hard to stomach the flavor, I usually just keep it to when I'm feeling particularly fuzzy or lethargic (OK, OK . . . or hungover).

But after months of reading how this leafy tonic is basically a miracle in a shot glass (drinking an ounce of this stuff is apparently like eating two-and-a-half pounds of vegetables), I decided to go all in on the grass and take a one-ounce shot of it every morning for seven days. I only drank it freshly made on the spot, and the guy at my local juice shop recommended drinking the elixir on an empty stomach to avoid nausea and swishing it around in my mouth before swallowing. Although not thrilled with the idea of experiencing the taste any longer than I needed to, I obliged.

It helped with digestion. I've always been envious of the people who go to the bathroom at the same time every morning like clockwork. For me, it's always been a guessing game, and body stressors like traveling or certain foods can throw me off even more. But I discovered that as early as the second day, the wheatgrass helped with my digestive issues. I wasn't experiencing any bloating (even after having an entire cheese plate for dinner one night) and was going to the bathroom regularly every day (hallelujah!).

I needed less caffeine. When it comes to coffee, I'm typically a two-cups-a-day kind of girl — sometimes three if I've had a late night. My morning shot actually gave me a steady stream of energy throughout the day, and I found myself drinking less caffeine as the week went on. By day seven, my morning routine had transitioned into wheatgrass and green tea rather than my usual breakfast of 24 ounces of dark roast.

Related:
I Traded My Afternoon Banana For a Protein Shake and Wasn't Expecting This to Happen

My gums felt plumper. This was a side effect I was not expecting, but by week's end, my gums actually felt fuller and healthier. Maybe my juicer was onto something when he instructed me to swish the shot around in my mouth first. (I was partly convinced he was playing a sick practical joke.)

Although I enjoyed the way my body felt, I never got used to the taste. While bottled brands will sometimes dilute the drink with lemon or ginger, when it's fresh from the juicer, there isn't anything to cut the bitterness. I finished with a pineapple chaser each day but couldn't quite shake the anticipation of the grassy taste.


Will I Keep Going?

Absolutely. If my body experienced these types of results after only one week, I can only imagine how I will feel six months from now. Keeping up with one shot a day might be tough, but I can certainly commit to three or four times a week. I love the idea of weaning my body off caffeine and getting energy from a healthier, less addictive source. Although it won't replace a healthy diet, it's also comforting to know I'm getting a solid dose of vitamins, minerals, and antioxidants in one swallow.

I just hope eventually the flavor will grow on me.