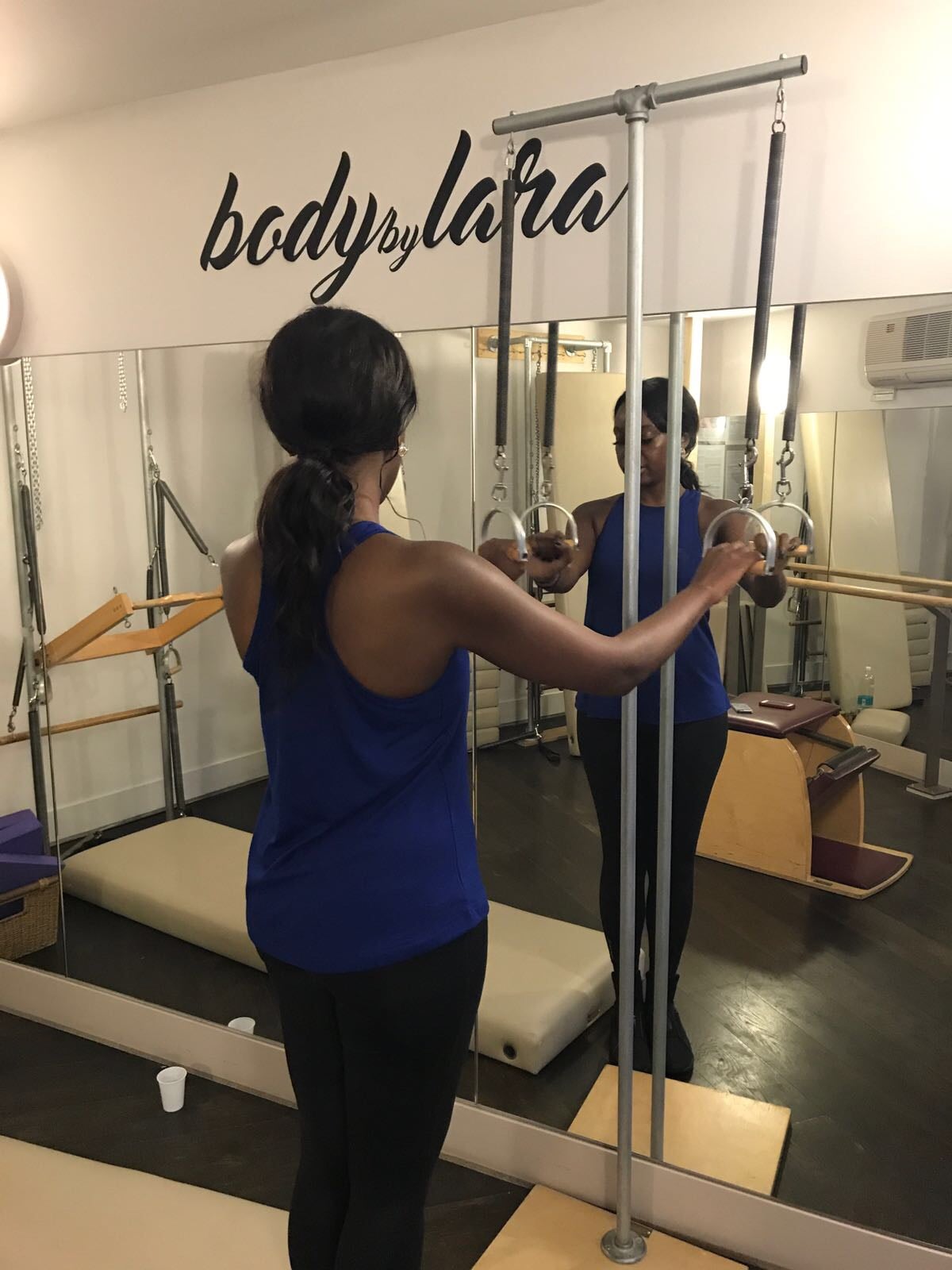 Lara Hassan has been changing bodies since the year 2000, with one of her most famous clients being none other than Sting. Growing up with a father in the Lebanese army, Lara believes it was his lifestyle there that helped her understand the importance of working out regularly and eating well.

While military-style training might be some people's idea of a good workout, Lara has developed a program which combined several effective exercise methods to ensure the body is challenged but isn't strained too much.
"There are many workouts out there that can benefit aspects of fitness and the body. For example HIIT, cardio fitness, strength training, barre, Pilates, and yoga," she told me. "Body By Lara is a method which combines an element of each in one workout."

I went down to her studio in London where she works out with Cadillac springs and a Reformer box for her Pilates element, TRX straps, and a barre for achieving that ballerina bod. From focusing on hitting the right steps for plies across the room in the dance element, to constantly correcting my alignment, there was barely time to realize just how tough the workout was while I thought about getting it right.

In fact, according to science, dance-type workouts are best for boosting brain function and helps fight brain disease like Alzheimer's.

"Strength training can leave the body tight and can sometimes put strain on the joints, so does regular cardio training," she continued. "Barre is generally a great method but it has been replicated and perhaps outdone itself as many just jump on the bandwagon to create another copy of a copy. What I have personally done is created a workout which has an element of cardio, dance, Pilates, barre and Garuda."

The HIIT training she offers is great because it supercharges calorie burn and improves metabolism. It also has anti-aging benefits by halting or reversing the shortening of Telomeres (the DNA ends which help protect our chromosomes) which happens over time but can be accelerated by stress, smoking, obesity, lack of exercise and a poor diet.

However she avoids plyometric moves that can put a strain on joints and compromise alignment.

A post shared by Body by lara method (@bodybylara)

"In each workout I have incorporated a four-minute interval of high intensity circuits to help the body get that cellular rejuvenation effect.The moves I use are not you heavy jumps which could put strain on the joints , they are Pilates-based which focus greatly on core and alignment performed at a speed which maximizes calorie burn," she explained. "In addition to this, I use Pilates springs which will add challenge to core stabilization and give an extra stretch to help lengthen the muscles.

"The barre component adds the dance-esque aspect and is a choreography of exercises which lift the butt, slim the waist line and sculpt the whole body. I use the springs to perform barre moves which is challenging, lengthening and fun. The muscles get resistance which helps in muscle shaping and strength."

Pilates is the base of the method as it is the one workout that brings the body to balance, plus improves movement technique and muscle function. Incorporating small weights and elastic bands, it's great for working on the posture, core strength, agility, speed, breath and general body awareness.

The yoga & Garuda elements in the workout add the three-dimensional moves which challenge and improve coordination, release tension and massage the facia which surrounds the muscles. The joints and bones will have more space to move, the mind body connection gets better, and the body gets the beautifying effects of sculpting, cellulite reduction and overall wellness.

The result is a well rounded workout that doesn't leave you feeling like you've just completed boot camp. Although, from Lara's upbringing, that might have been the predictable route to go.

A post shared by Body by lara method (@bodybylara)