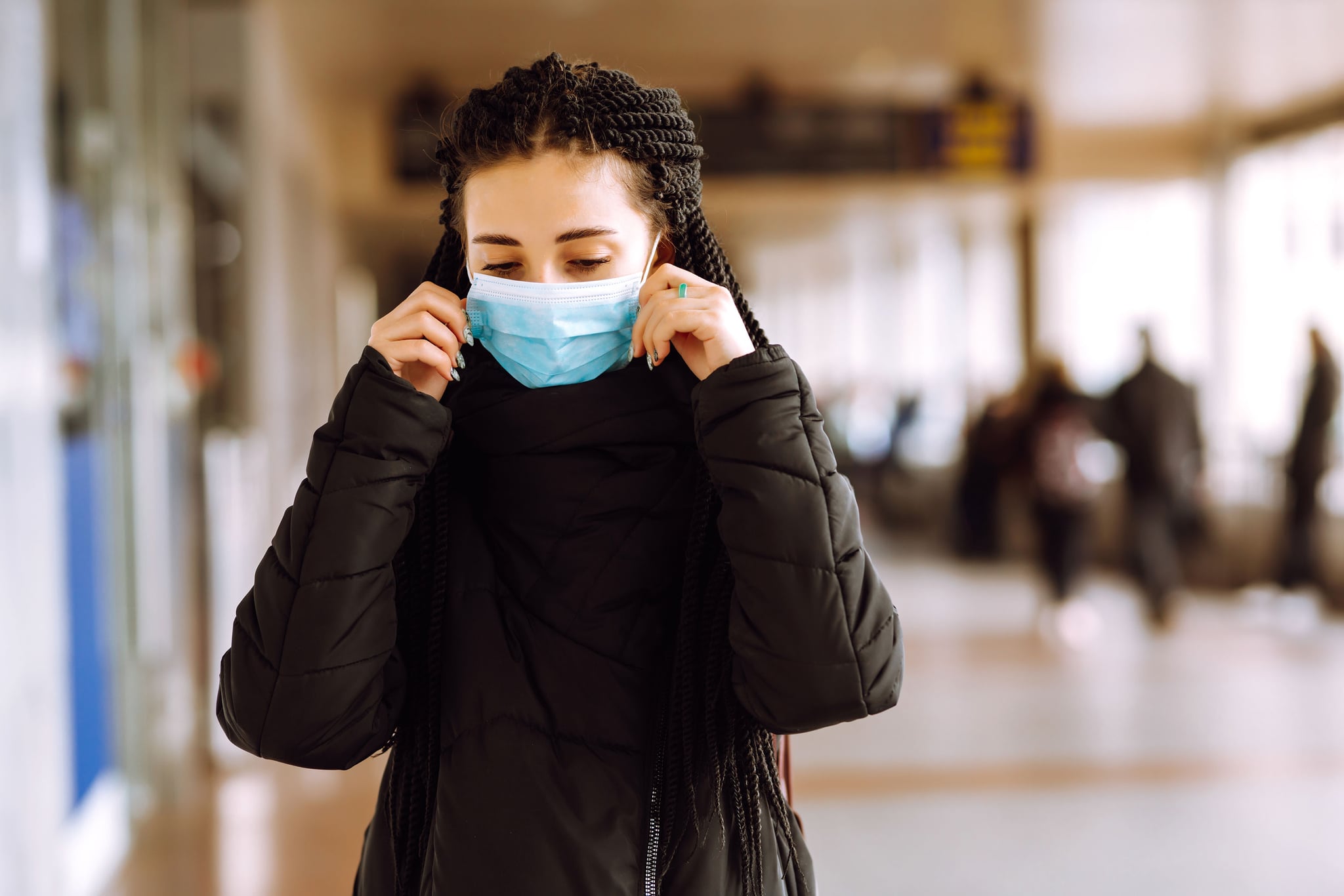 As more studies are conducted, what we know about the novel coronavirus (COVID-19) and how it spreads changes. For one, the CDC states that transmission of the virus is most likely caused by ingesting respiratory droplets as opposed to touching infected surfaces — though that can still cause infection. But, how long do these droplets stay in the air? And, how does the size of these droplets affect that transmission? An open letter supported by over 200 experts from 32 countries argues that virus-containing "microdroplets" dispersed from people can be airborne, even though the World Health Organization (WHO) says results are still inconclusive.

A group of experts wrote to WHO back in April, and the debate around airborne transmission has been ongoing ever since. This specific open letter is signed by 239 experts asking for accountability from WHO and stating that smaller particles can infect people and can stay in the air for long periods of time. For background, there's a difference between respiratory droplets that can travel briefly and be ingested versus tiny droplets called aerosols — smaller than five micrometers or microns — which can "float around for a while," Emily Landon, MD, medical director of antimicrobial stewardship and infection control at University of Chicago Medicine, explained in an article.

Dr. Landon wrote the article back in March only days after a national emergency was first declared in the US due to the COVID-19 pandemic. But, she explained the general distinction between aerosols and the "small bits of fluid that you can feel and see when someone sneezes." Aerosols are like hairspray in a room, she said. When you go into the bathroom later, it lingers.

On the WHO website, it states that the virus spreads "primarily from person to person through small droplets from the nose or mouth, which are expelled when a person with COVID-19 coughs, sneezes, or speaks." But the droplets, WHO says, are relatively heavy, don't travel far, and "quickly sink to the ground." These are the droplets that Dr. Landon specified as "small bits of fluid" as opposed to those aerosols that last in the air.

The Debate Around Airborne Transmission Explained

WHO has not responded to POPSUGAR's request for comment, but in a press briefing on July 7, WHO experts reiterated that, right now, they only recognize airborne transmission being of risk with aerosols in healthcare settings where procedures can disperse them from infected patients. WHO specified in its June 29 update on COVID-19 that these are procedures such as tracheal intubation and bronchoscopy. Anne Liu, MD, immunologist and infectious disease doctor with Stanford Health Care, previously told POPSUGAR, "the healthcare provider is doing something that would cause the patient to generate more aerosols, so putting a tube in their throats to help them breathe or doing a procedure that makes them cough or doing a procedure that makes them potentially gag."

Here's the argument from these experts who signed the open letter: they say that studies do suggest COVID-19 can in fact be airborne and travel through aerosols from person to person. They argue that WHO and other public health organizations don't recognize airborne transmission properly and instead focus on hand washing and physical distancing as the main form of protection for the public, which they feel is "insufficient to provide protection from virus-carrying respiratory microdroplets released into the air by infected people."

A study from The New England Journal of Medicine that mimicked sneezes or coughs from humans, suggested aerosols remained viable in the air for three hours, and researchers told The New York Times in response that aerosols could likely be suspended in the air for 10 minutes to half-hour. The open letter specifically states that airborne transmission is the "only plausible explanation" for what is now being called "superspreading events" where clusters of people are infected with COVID-19.

Related:
From Bandanas to DIY Masks, This Is How Effective Your Face Covering Is, a Study Says

For instance, a single individual with COVID-19 infected a confirmed 32 people (and 20 more probable others) during a two-and-a-half-hour choir practice in Washington State. An early release paper published by the CDC, which looked at clusters of COVID-19 in Japan from January to April, noted many clusters were associated with "heavy breathing in close proximity, such as singing at karaoke parties, cheering at clubs, having conversations in bars, and exercising in gymnasiums." (You can read more about working out during COVID-19 here.) The size of the droplets in these scenarios is not clear, but those who signed the open letter believe airborne transmission is likely the case in superspreading events in general.

Linsey Marr, an aerosol expert at Virginia Tech, who was one of the people working on this open letter, told The New York Times that it's unclear how often the virus is spread via aerosols compared with larger droplets that are expelled. Aerosols contain less of the virus than larger droplets do, but they can linger longer in the air. And, via The New York Times, experts have said for months that "infected people also are releasing aerosols when they cough and sneeze. More important, they expel aerosols even when they breathe, talk, or sing, especially with some exertion."

WHO technical lead for COVID-19 Maria Van Kerkhove confirmed in the July 7 press briefing that the organization's focus is on the risk for healthcare workers "where you have those aerosol-generating procedures," but they're also looking at the possible role of airborne transmission in crowded settings with poor ventilation." WHO says it's been going over data and working with "a large number of groups . . . to try to consolidate the growing knowledge around transmission." In the coming days, WHO will be releasing a scientific briefing that will outline what findings it has in this area.

WHO chief scientist Soumya Swaminathan explained in that same briefing that when you're in an "emergency situation" like this pandemic where the science is constantly changing on almost a daily basis, it takes time to review the thousands of publications that WHO gets sent per day. WHO experts do a systematic review of the evidence, and whether or not the experiments that come out of laboratories reflect what happens in day-to-day settings, they cannot conclude. So, when it comes to publishing recommendations with the assistance of its guideline development group (in which some of the scientists authored in those studies are a part of), WHO uses the utmost caution.

Benedetta Allegranzi, WHO's technical lead on infection control, acknowledged in the July 7 press briefing that more research needs to be done on respiratory droplets as well as on how much of the virus is required to be ingested to infect us in an airborne transmission. There are factors that help protect us from the spread of virus-containing respiratory droplets, though. For instance, airflow plays a part. The risk is highest in crowded indoor spaces with poor ventilation like some churches, restaurants, and gyms (note: you should still wear a mask outdoors if you're near others). As Dr. Liu told POPSUGAR, "I hope that people understand that the longer you are indoors with other people, even if they're wearing cloth masks or surgical mask, the higher the risk of transmission becomes." Air circulation, she said, disperses respiratory droplets more effectively.

Let's be clear, this doesn't mean that COVID-19 particles are just traveling through the air wherever you go. Bill Hanage, an epidemiologist at the Harvard T.H. Chan School of Public Health, clarified to The New York Times, "We have this notion that airborne transmission means droplets hanging in the air capable of infecting you many hours later, drifting down streets, through letter boxes and finding their way into homes everywhere." That, he said, is not the case. Instead, we should be wary of being in close range of people, especially indoors and especially when there is a lack of physical distancing happening in a crowded place.

The experts in that open letter wrote, "It is understood that there is not as yet universal acceptance of airborne transmission of SARS-CoV2; but in our collective assessment there is more than enough supporting evidence so that the precautionary principle should apply." (Note: SARS-CoV2 is another term for COVID-19.) As related in the July 7 briefing, WHO recommends avoiding closed settings and crowded situations, and it recommends "appropriate and optimal" ventilation of indoor environments. What's more, WHO recommends physical distancing and masks. For the general public, fabric masks are suggested in areas of widespread transmission where physical distancing is not possible. Medical masks, WHO says, should be saved for healthcare workers, anyone with symptoms suggestive of COVID-19, people caring for those with COVID-19, and high-risk individuals when they cannot physically distance.

Here's what to remember moving forward:

Wear masks when physical distancing cannot occur, especially when indoors. N95 masks filter out most aerosols, but cloth masks are recommended for the general public. "Even cloth masks, if worn by everyone, can significantly reduce transmission," one aerosol expert told The New York Times.

Avoid crowded places, especially indoors where you can't physically distance from others. Superspreading events can occur when people are indoors for long periods of time with poor ventilation.

Don't forget about other safety measures. Aka: wash your hands and stay home if you feel sick. If you are a person who is at a higher risk of infection, take appropriate precautions. Call your doctor with any questions, and follow the guidelines put in place where you live.