Cinnamon rolls are the ultimate decadent breakfast treat. They're flaky, sweet, gooey, and just about perfect. If you're as obsessed as we are, then prepare yourself for this gigantic cinnamon roll! Is has everything you love about cinnamon rolls but in a giant package. Slice into it and serve it up as a cake, or save it for yourself and have the most epic breakfast of all time. For more delicious breakfast recipes, you need to check out our Funfetti cake cinnamon rolls and our giant doughnut. 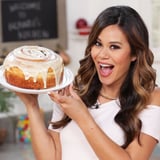 Brunch Recipes
64 Healthy Brunch Recipes For When You Have Extra Time in the Morning to Savor Each Bite
by Jenny Sugar 10/7/20
Latest Recipes, Menus, Food & Wine