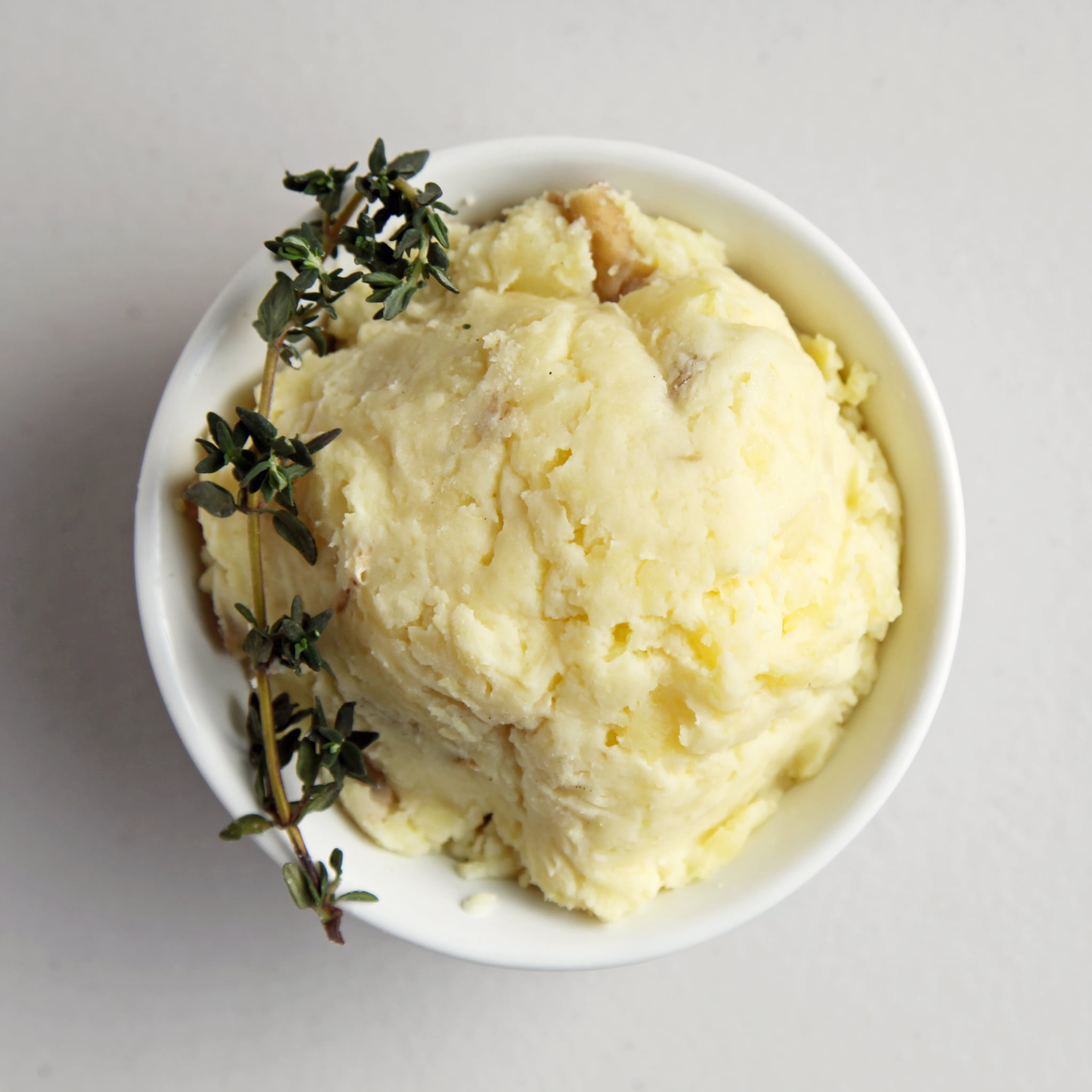 Food Network chef Tyler Florence shared his mashed potatoes recipe with us, and I immediately had to try it. Traditionally, potatoes are cooked in water before being mashed together with butter and cream (or milk). However, Tyler suggests cooking the potatoes in the cream itself, so no potato-y flavor is lost. He explains, "Potatoes have a really delicate, beautiful minerality to their flavor profile, and when you cook potatoes in water and you pour that water down the drain, you've extracted all the flavor of the potato. So what I do with mashed potatoes — because you finish them with cream and butter anyway, right? — is I'll take that same cream and butter and add that to the potatoes and cook the potatoes in cream and butter." Would that actually work? Would it actually taste good? I had to find out.

As Tyler instructed, I added "cold, peeled, chopped potatoes, cream, butter, and olive oil" to a pan. So, He also told us, "I like garlic. I like sage and rosemary flavor combinations, and a little bit of thyme." To my pot of 3 pounds of potatoes, I filled it with enough half and half to just barely cover the potatoes. Frankly, I was scared about using straight cream, which is why I deviated slightly from his instruction. I then added about 3 tablespoons of salted butter and 3 tablespons of olive oil. I added a few cloves of peeled garlic, half a bunch each of sage, rosemary, and thyme. I also a significant amount of salt (at least a teaspoon) so the potatoes could absorb some of the flavor while cooking. I covered the pot and allowed it to simmer on medium until the potatoes became fork tender, about 20 minutes. The aroma in my kitchen was unbelievable.

Here what Tyler told us to do next: "When the potatoes are tender, I put a bowl on the counter and a colander inside that bowl. I pour the potatoes through the colander, and the cream will collect on the bottom. Then I'll put the potatoes back into the pot and take the potato-infused garlic cream and fold that back into the potatoes, and it's the most incredible flavor profile. It's the best mashed potato you'll ever taste in your entire life." And so, I did just that. I drained the potatoes, collecting the rich liquid while discarding the herb stems. I then mashed the potatoes, adding back in the liquid until I created velvety smooth mashed potatoes with little specks of garlic and herbs. I salted and peppered to taste and served up with my lemon-garlic-parsley roast turkey and gravy. These mashed potatoes are pure heaven. I can now agree with Tyler's affirmation; they really are the best mashed potatoes I've ever tasted in my entire life. And even though I was scared it would be a huge flop, I'm never going back to any other method again.