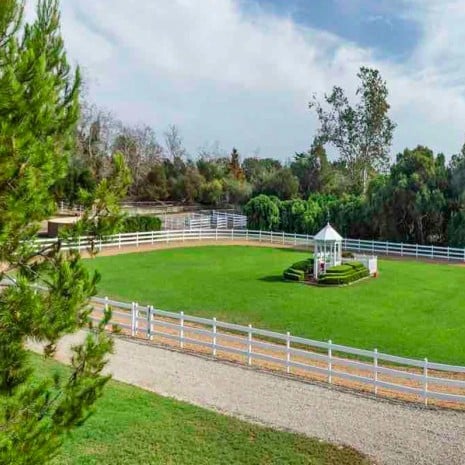 Media Mogul and Weight Watchers partial-owner and spokeswoman Oprah Winfrey only just bought a lavish Telluride retreat, but it's just come to light that she recently purchased again. Her most recent acquisition is a 23-acre equestrian farm in Montecito, an affluent California town near Santa Barbara where Oprah already owns an uber luxe neo-Georgian mansion. Seafair Farm is one of the largest and most coveted properties in town, and until it went it went up to auction it had been owned by the same wealthy family for thirty years. According to the auction's timeline, Oprah put the winning bid of $28.85 million on the property in November and closed in December.

Purchasing a sprawling equestrian farm seems like an odd move for Ms. Winfrey, until you learn that the farm is located adjacent to her existing property on one side and abutted by a 44-acre dedicated preserve on the other. It looks like Oprah is planning on expanding her Montecito mansion into a secluded palace. As for the 4,750 square-foot, four-bedroom, four-and-a-half bath ranch house that sits on the farm along with its barns, paddocks, and pens, we can only imagine Oprah will acquire a deep affinity for horses – or have one heck of a guest property to offer friends when they come to visit.