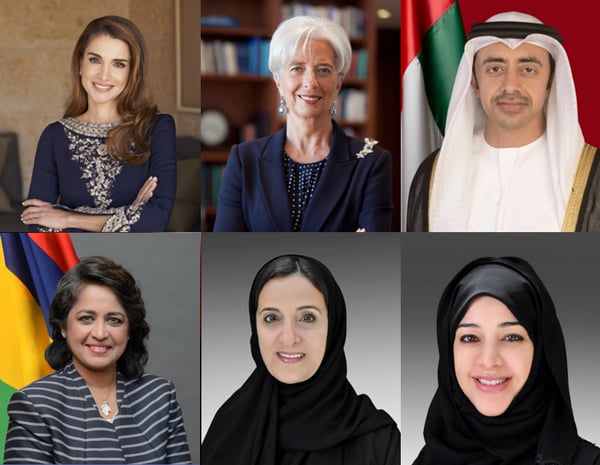 February has been a great month for the focus on women in the Middle East. Fresh on the heels of appointing a new cabinet of #GirlBoss ministers, Dubai will be hosting Global Women's Forum Dubai 2016, the region's first women's conference in all of MENA. The event is expected to attract 2,000 delegates with 200 speakers, and will take place Tuesday 23 and Wednesday 24 February 2016 at Madinat Jumeirah Hotel in Dubai.

The conference will promote women's contribution to the future of society and focus on five main topics to inspire roundtable discussions: Achieving, Creating, Giving, Energizing, and Sustaining. Follow along with the discussion online with the Twitter hashtag #PositionOfStrength.

Queen Rania is the keynote speaker for openning the event. She is the Queen of Jordan and knownf for her advocacy work related to education, health, community empowerment, youth, cross-cultural dialogue, and micro-finance.

H.H. is the son of the founder of the UAE and the UAE Minister of Foreign Affairs since 2006. As Minister of Foreign Affairs, Sheikh Abdullah launched a number of international forums, including the Sir Bani Yas Forum the Global Forum on Relationships between the Arab World, Latin America and the Caribbean, and the Arab League countries dialogue with Pacific Island States.

H.E is the Emirati Minister of State since 2008 and Managing Director for the Dubai World Expo 2020 Bid Committee. She earned a BA in International Relations and French from Tufts University and received a masters degree from Harvard University.

Sheikha Lubna is a member of Sharjah's ruling family. She is the first woman to ever hold a ministeral post in the UAE. In addition to her role as the Minister of State for Tolerance, Sheikha Lubna was also the first female President of Zayed University and voted the 42nd most powerful woman in the world by Forbes in 2015.

Christine Lagarde is the Managing Director of the International Monetary Fund. Previously, she held various ministerial posts in the French government: she was Minister of Economic Affairs, Finance and Employment and before that Minister of Agriculture and Fishing and Minister of Trade in the government of Dominique de Villepin.