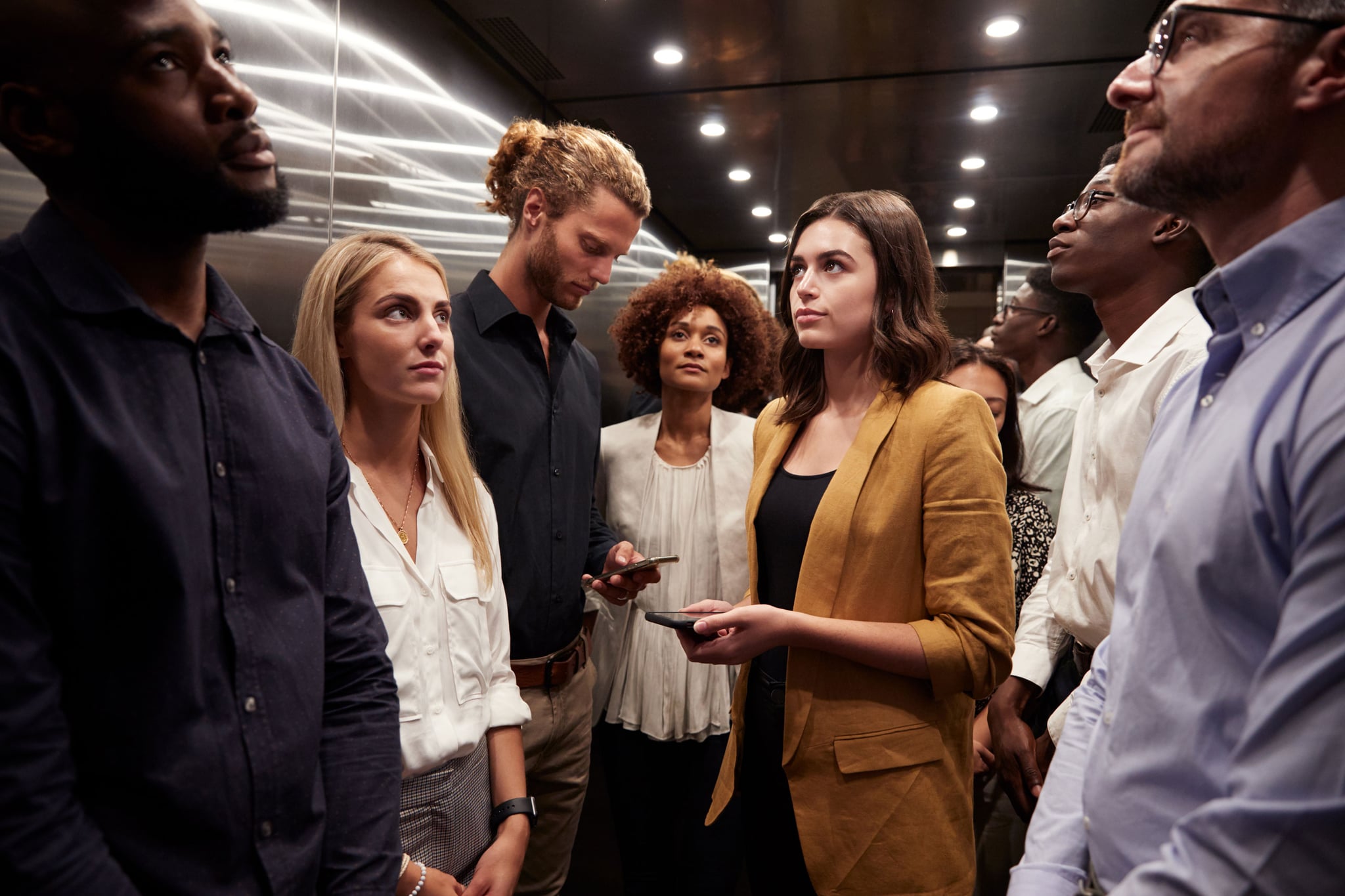 I think at some point, everyone has felt a bit awkward while using the elevator. There you are standing, waiting for the doors to close and, just as it's about to, you hear a bing and, suddenly those magical doors begin reopening et voila, you are now sharing a lift with a bunch of strangers and are questioning your literal existence.

While human interaction is, by all means, normal and unavoidable (sorry Agent M), it can leave some, wondering that the best course of action is. Do you greet them? Stare at the floor? Do you go back to checking your phone? Close your eyes and pray that you get off on the right floor? Or, do you do my personal favorite, and start doing a little nervous wiggle and hum?

From experience, the wiggle does tend to make things a bit more awkward. Saying "hi" is often met with deafening silence as they usually don't hear the little cry for attention (thank you, Instagram), and staring at the floor often leads to a head rush, even if you are travelling at -100m/ hr. A true pickle if I do say so myself. In an attempt to help myself and you (should you relate), I tried to find the best possible way to avoid elevator awkwardness and make the odd friend or two. For the experiment, I tried a number of different methods, recommended by Reddit (what was I thinking) and colleagues for a period of five days. Here's how it went.

Day One
Experiment: Say "hi" to those sharing the lift with me.

Round One
Time: 8:55 a.m.
Outcome: Not one soul looked up or flinched.
Outtake: People are not in the mood to chat in the morning.

Round Two
Time: 1:05 p.m.
Outcome: Three of the five people looked up from their phones and greeted me back.
Outtake: People are nicer after lunch (and coffee?).

Round Three
Time: 6:15 p.m.
Outcome: Two of the three passengers greeted me back, one even asked how long I'd worked in the building.
Outtake: Home-time = happy time.

Day Two
Experiment: Stand at the back of the lift and say "Welcome, I've been expecting you."

Round One
Time: 8:50 a.m.
Outcome: Slight judgement and an eye-roll from the only other lift attendee.
Outtake: Probably not the most comforting greeting. Thanks, Reddit.

Round Two
Time: 2:10 p.m.
Outcome: A stare down with one of the two people who got on two floors after me.
Outtake: Still probably not the best greeting. Impressed with my ability to maintain eye contact.

Round Three
Time: 6:45 p.m.
Outcome: A sincere "Thank you, it's nice to feel wanted", from the lady on the second floor.
Outtake: I'd like to be her friend.

Round One
Time: 8:59 a.m.
Outcome: No answer or acknowledgement.
Outtake: Beginning to think that any mission would fail pre-midday.

Round Two
Time: 3:15 p.m.
Outcome: Two rude stares from the three people in the lift.
Outtake: People don't like to share, even if they're playing their Instagram videos for all to hear.

Day Four
Experiment: Stand silently while remaining approachable, in the hopes that someone greets me first.

Round One
Time: 9:15 a.m.
Outcome: Two of the four people remained glued to their phone. The third asked me to press five on the lift and the fourth realized he was in the wrong building.
Outtake: Still believe that people are not social in the morning.

Round Two
Time: 1:45 p.m.
Outcome: Silent journey down.
Outtake: Bit sad that none of the five people sharing the lift uttered a word.

Round Three
Time: 6:35 p.m.
Outcome: Involuntarily watched two Instagram videos. One of a cat, playing the piano and one of the protests in Lebanon.
Outtake: Cats are cute.

Day Five
Experiment: Smile at everyone who enters the elevator.

Round One
Time: 8:45 a.m.
Outcome: No one noticed or looked up.
Outtake: Don't bother with social interactions before 12 p.m.


Round Two
Time: 2:55 p.m.
Outcome: Two of the three people sharing the lift awkwardly smiled back.
Outtake: Smiling seems to be the new "hi".

Round Three
Time: 7:45 p.m.
Outcome: Two of the four people smiled back, the other two said "hi" as a response.
Outtake: Smiling is the new "hello".

In conclusion: Should you wish to make friends, avoid initiating conversations in the morning. Never. Ever. ask to see someone's Instagram feed before sunset. Smiling is a good way to make new friends and ease tension.