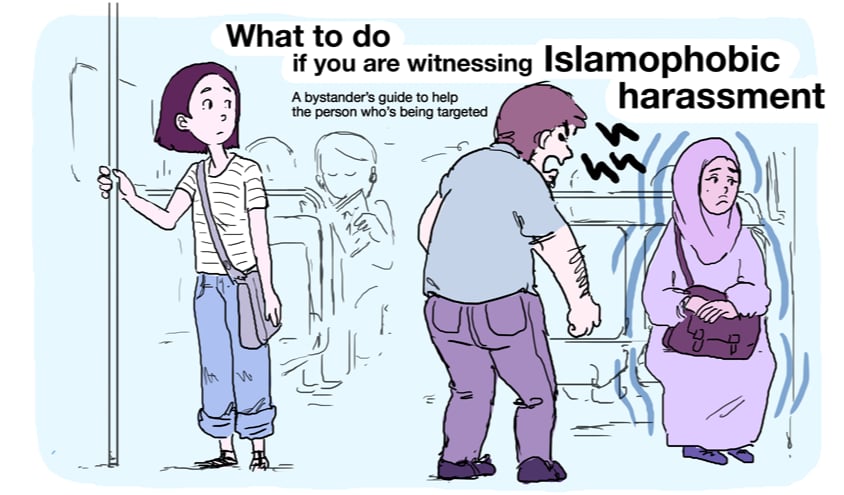 Maeril is a freelance illustrator who lives in Paris, where she's been the witness of Islamophobia on more than one occasion. Instead of looking away or ignoring the problem, Maeril decided to create a cartoon advising people on how to best deal with Islamophobia.

Her illustration instructs people on "what what to do if you are witnessing Islamophobic harassment."

"Engage in conversation," and "keep building a safe space are some of her tips.

Steps One and Two

On TUumblr, Maeril explains her impetus for creating the cartoon: "

Hi everyone! This is an illustrated guide I made as part of my co-admining work at The Middle Eastern Feminist on Facebook! It will be published there shortly.
The technique that is displayed here is a genuine one used in psychology - I forgot the name and couldn't find it again so if you know about it, feel free to tell me! Some could say: "Yes but you can use that technique for instances of harassment other than Islamophobic attacks!", and my reply is: Sure! Please do so, it also works for other "types" of harassment of a lone person in a public space!! However I'm focusing on protecting Muslims here, as they have been very specific targets lately, and as a French Middle Eastern woman, I wanted to try and do something to raise awareness on how to help when such things happen before our eyes - that way one cannot say they "didn't know what to do"!

I'd like to insist on two things: 1) Do not, in any way, interact with the attacker. You must absolutely ignore them and focus entirely on the person being attacked! 2) Please make sure to always respect the wishes of the person you're helping: whether they want you to leave quickly afterwards, or not! If you're in a hurry escort them to a place where someone else can take over - call one of their friends, or one of yours, of if they want to, the police. It all depends on how they feel!"