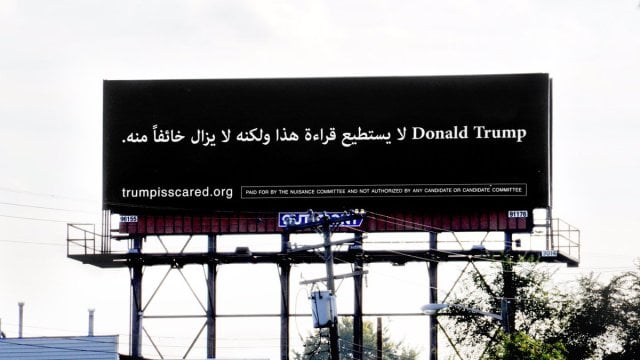 A new billboard was recently put up on a major road in Dearborn, Michigan, and it's quickly turning heads.

The poster is black with white writing, and the text on the billboard appears in Arabic" "Donald Trump can't read this but he's scared of it anyway," the sign reads.

The ad, which mocks U.S. Presidential Republican candidate Donald Trump, is funded by the Nuisance Committee super PAC. The committee was started by the creator of the Cards Against Humanity game. So far, the billboard has raised more the $410,000 through their fund-raising campaign.

"We came up with it because we believe that Donald Trump's hateful rhetoric is not based on reality. It's based in fear," Nuisance Committee spokeswoman Melissa Harris to the to the Detroit Free Press. "And we think that irrational fear is what's driving his anti-immigrant message."

Dearborn has a high percentage of Arab Americans and Michigan is a swing state, so the ad aims to sway the 300,000 people who will drive by the sign each week. Whether or not it works, the sign, which cost a little over $4,000, is worth it in laughs.