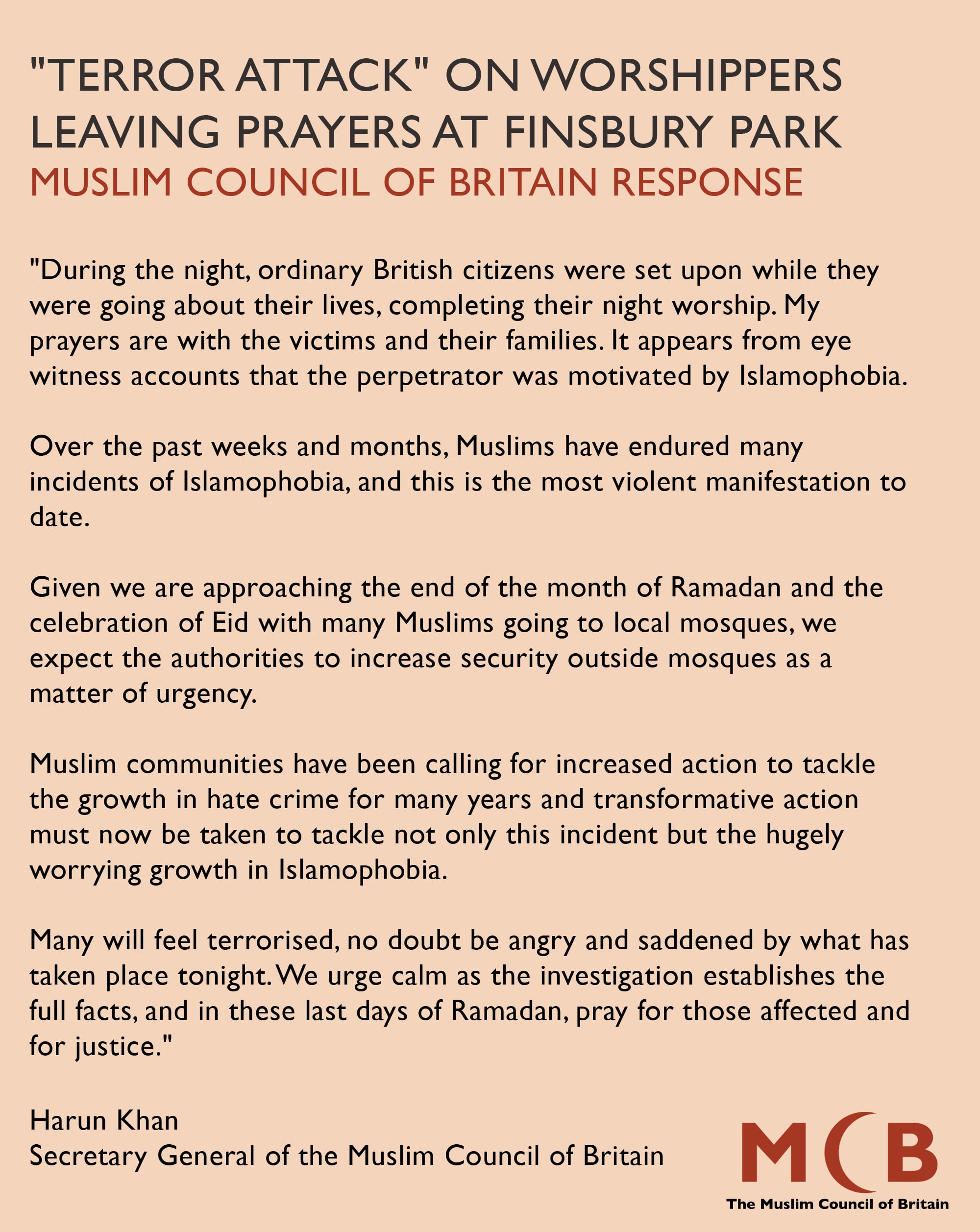 One person has died and at least 10 more have been injured after a man drove a van into people leaving a mosque in London's Finsbury Park neighborhood. Taking place just after midnight GMT, the attacker was a white man who drove the vehicle into a crowd of Muslims who are currently acknowledging the Holy Month of Ramadan.

NO, the "vehicle" didn't just drive itself into worshippers

This is a terrorist attack

Twitter has given me more insight on recent events than any other news station #FinsburyPark pic.twitter.com/aOC8N3pQJe

While the social media response has included much sympathy from people of all races and religions, many of the Tweets have pointed out how the mainstream media in the UK initially reported the news.

Thinking of everyone affected by events in London's #FinsburyPark. Take care of each other.

Dear Muslim community, I stand with you. You are valued & there are so many of us fighting with you for equality & acceptance#FinsburyPark

Shocking news of terror attack on worshippers in #FinsburyPark. My thoughts are with victims and the local community today.

Noting British Prime Minister, Theresa May's initial statement, as well as headlines from the likes of the BBC, Daily Mirror and more, people have pointed out that similar attacks in the capital have quickly been labeled terrorism straight off the bat. However in the case of this white male, the media has hesitated to make the claim.

Check out the Tweets below. They certainly have a point!

Why is the coverage of this attack so different because he is a white. Hate is hate! Stop broadcasting it differently #FinsburyPark

I mean seriously, if this guy just had a beard or his name started with Abdul/Mohammed, He would have been a terrorist! #FinsburyPark

British media, your double standards disgust me. The attack at #FinsburyPark was a terrorist attack. Your sly racism is not welcome.

So the idiot driver of the #FinsburyPark van was not shot on sight and will have a mental health assessment? Why treated differently? 🤦🏼‍♀️ pic.twitter.com/CujKMDpjib

Theresa May calls #FinsburyPark attack a "terrible incident"
Where's her anger and "enough is enough" talk...This is terrorism afterall.

Terrorism has no race, religion or ethnicity.
Terrorism is terrorism, treat terrorism without considering their background.#FinsburyPark

Absolutely tragic events in #FinsburyPark last night. A clear terror attack on innocent people, it shouldn't matter who they are

Will the guy who mowed down people going about their business in #FinsburyPark be called a terrorist or do Muslim pedestrians not count?

White privelge is being able to commit attacks of hate seeking to terrorize communities & still not be branded a terrorist. #FinsburyPark

As a white British man I am a little uncomfortable with the reporting of #FinsburyPark This is a targeted attack. It IS Terrorism

Terrorism has no race or religion... Apart from in the media that is #FinsburyPark pic.twitter.com/BBBTjiXwna