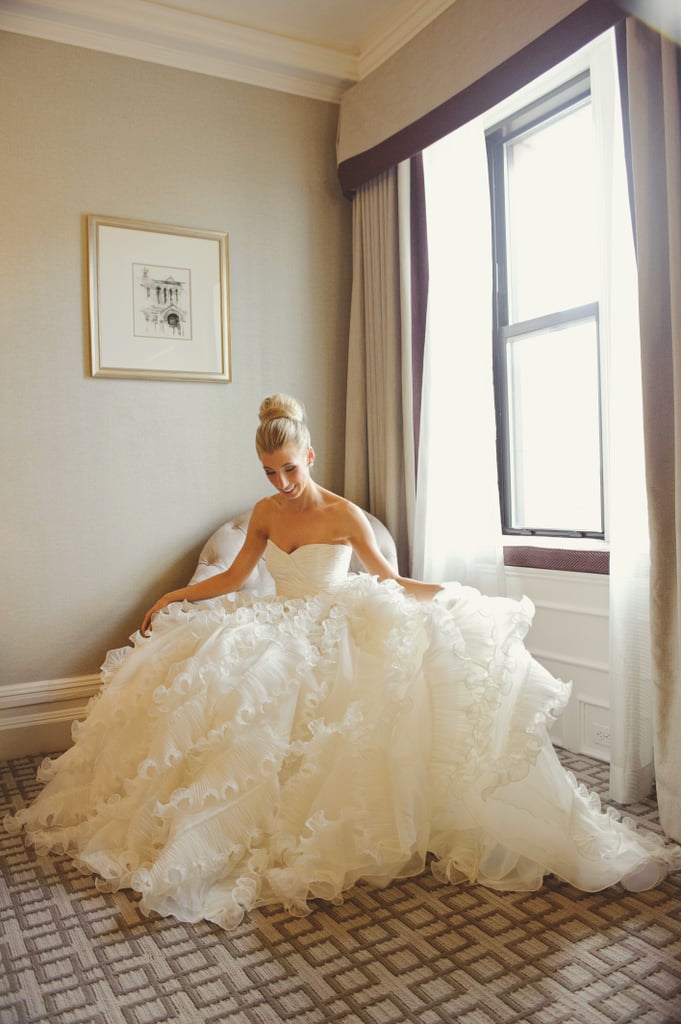 What would it be like to have your wedding photos so popular that strangers actually recognize you from Pinterest? Maggie Winterfeldt Clark of The Editorialite knows firsthand what that experience is like, and she's sharing her story with us!

This photo of me in my wedding gown, getting ready preceremony, has become popular on Pinterest. Very popular. This is simultaneously the highest compliment a bride can receive and, frankly, a little weird. The pin originated with my wedding photos on Style Me Pretty, a major wedding blog, where it was submitted by my wonderful wedding photographers. From this single pin, it spread exponentially. I started receiving messages from people I hadn't seen in years enthusiastically informing me that they had stumbled upon my wedding photo on Pinterest, and I recently met a wedding blogger who, after looking at me sideways for a period, finally shouted, "I figured out where I know you from! Your wedding dress is on Pinterest!" But it's not the recognition that makes it weird — that only happened once, and it was actually more cool than creepy. What's strange is the way I, the person in the dress, the bride whose wedding cyberspace is peering in on, have been seemingly disengaged from the image.

When a photo goes viral, its origins seem to get lost along the way. The link back becomes diluted and eventually it's impossible determine where the Pin originated, let alone who the subject is. But what I've realized is that people don't really want to know who the bride is. Each person who pins the image to her board imposes her own style, personality, and hopes onto it. The bride in the image becomes incidental, a nameless stand-in, a placeholder. While I understand this — I too created a Pinterest board full of idyllic yet anonymous brides leading up to my wedding — I can't help feeling that I've been severed from one of the most intimate and significant moments of my life.

I shouldn't have been surprised a few weeks ago when I discovered — completely by chance — that another major wedding blog had selected the photo to be their "wedding dress of the week." They posted the gown on Facebook and within days accumulated over 3,000 "likes" and dozens upon dozens of comments. All these people I didn't know were scrutinizing and judging my wedding gown, leaving comments that ranged from (and I'm paraphrasing) "that's my dream gown" to "ew, the ugly calamari dress."

Sensing an opportunity to reclaim my photo, I stepped in. "This is crazy! That's me! I'm so flattered," I wrote in the comments. And then, assuming that those who liked the gown would be interested to hear why I selected it, I proceeded to share the story of how I found my wedding gown. In sharp contrast to the thousands of "likes" the post received, my story received a pathetic three little blue thumbs up. The ambitious writer that I am, I took the additional step of emailing the blog and proposing that the story of how I found my gown be a guest post on their blog. "I have more photos of the dress, and it will be a great accompaniment piece to the 'wedding dress of the week,'" I pitched. They never responded.

So no one wants to hear the gown's backstory. That's fine. I suppose I shouldn't have expected a yearning for depth based on Pinterest repins. But there is a story behind the gown, a good one, and I'm longing to share it.