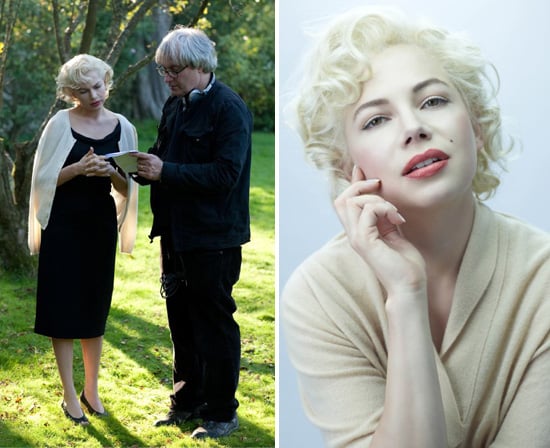 "It's a love letter to the agony and ecstasy of celebrity," director Simon Curtis, pictured above, told me about his latest project, My Week With Marilyn. The film starring Michelle Williams is out on Nov. 23, and follows the icon on a 1956 trip to London, which doubled as a honeymoon with playwright Arthur Miller and a work trip to film The Prince and the Showgirl. The movie, based on two books, catches up with Marilyn after her husband leaves and she begins to befriend 23-year-old set assistant Colin Clark (Eddie Redmayne).

My Week With Marilyn attempts to pull back layers of Marilyn the sex symbol to reveal a more authentic depiction of the private star — without turning her into a depressed or drudged-out caricature. I sat down with the filmmaker, and here's what Simon Curtis told me about Michelle's performance and what he learned about Marilyn Monroe.

TrèsSugar: Why did you want Michelle Williams to play Marilyn Monroe?
Simon Curtis: With Marilyn Monroe you have a certain, very limited number of people who are the right age, the right potential Marilyn Monroe looks. Michelle was way at the top of my list. Not only is she gifted and brilliant, she's incredibly hardworking and she wanted her performance to be as good as I did.

TS: You came in with high expectations. Did the performance exceed that?
SC: Yes, it does actually. You never know when you're making something, but she just amazed me on every single day. There's something about her fearlessness taking on the complexity of Marilyn, who I think a modern mental health professional would diagnose somewhere in the bipolar, borderline personality area. And certainly those wild mood swings — one of those beguiling things about Marilyn is that you never knew who was going to walk in the door, or who was going to walk out. And Michelle just went for it and presented this multifaceted character who's also incredible as Marilyn.

TS: What about those bookend song performances by Michelle? I had to do a double take for the final one because I couldn't quite tell if it was Michelle or Marilyn.
SC: We wanted to present in those songs the fantasy, the Marilyn people saw or remember, because so much of our film is this private, unexpected Marilyn.

TS: The movie is a window into her life rather than a biopic. By experiencing the details of her life, what do you think will surprise audiences about Marilyn?
SC: This is a very crucial time in Marilyn's life. In 1956, she came to London with such high hopes because she was going to work with the great Laurence Olivier, she had set up her own production company way ahead of her time, was in fact a producer of this film, and of course was married to the great Arthur Miller, who she thought was going to rescue her and give her some intellectual credibility. And the story of our film is how those things all went very quickly wrong.

TS: But there's a lot of humor in that dark story of things gone wrong. It sort of surprised me how feel-good it was in a way.
SC: I'm glad. It's a very nuanced film and there is a lot of darker stuff, but that's right. It's a love letter to filmmaking, the agony and ecstasy of filmmaking. I love it that the actors found so much humor, specifically Ken Branagh. We wanted it to have all of those qualities.

To find out why Simon Curtis thinks Marilyn is so relevant today, whether he used body doubles, and what he hopes audiences will come away with, just keep reading.

TS: Did you ever consider using body or voice doubles for Michelle?
SC: No. In this day of CGI, the more that's achieved actually by the camera with a talented person the better.

TS: Why do you think Marilyn is so relevant today? Not so many people in my generation have even seen her movies, but they're re-creating her photoshoots, etc.
SC: That's exactly my point. For most people she's a brand, rather than an actress. A face. It's a combination of that phenomenal face, the performances, the ongoing soap opera of her life, the famous husbands, the Kennedys, and of course, the early death.

TS: After working on this film how would you describe the real Marilyn?
SC: Well there's a Peter Bogdanovich quote, "Marilyn was in bad trouble from the day she was born." And I just began to feel more and more sympathy for Marilyn, as I think Michelle did, too. Given the cards she was given in life, she did a brilliant job.

TS: You talk about her being ahead of her time by starting her own production company. Do you think she almost broke glass ceilings for women?
SC: I don't know, because in some ways setting up her own production company, again, she was ahead of her time. But she did seem to be always reliant on alpha males. That's what's interesting about this relationship (with Colin Clark). It was her rare moment in her life when she looked at someone younger, someone less influential. Whatever the tricks of her trade were, she managed to forge a very brilliant career in Hollywood, and that itself is an achievement.

TS: What will audiences come away with?
SC: It's a love letter to cinema, a love letter to a lost world, and I think it's a love letter to the agony and ecstasy of celebrity, and in particular to a woman they may learn more about, beyond the brand. Marilyn, the marriages, things that are taken for granted today, when all movie stars have to submit their lives. I think she was ahead of her time in that way, too.

We're giving away $1,000 to Tiffany & Co. and a bottle of Marilyn Monroe's favorite perfume, Chanel No. 5, to celebrate the movie! Here are all the details.