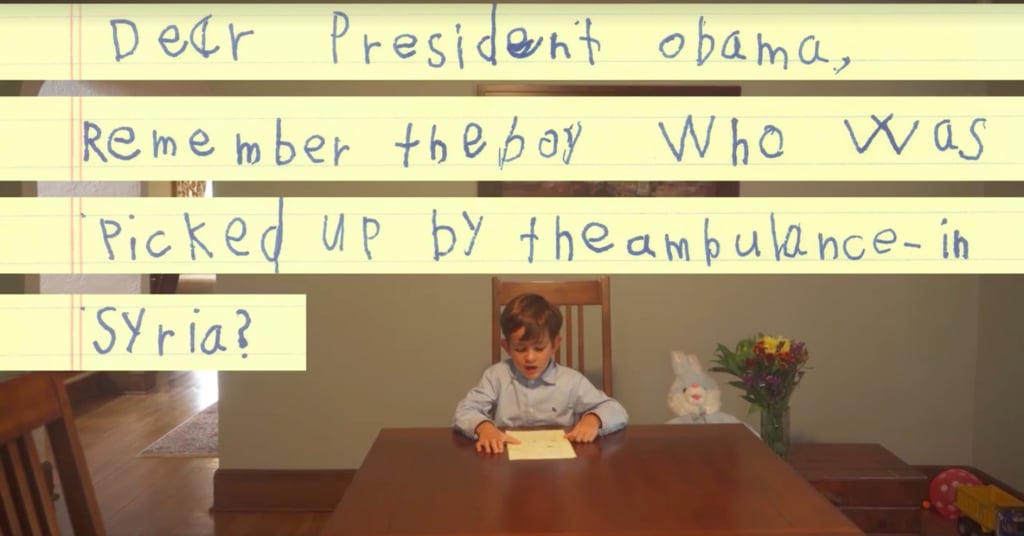 Like much of the world, six-year-old Alex, from Scarsdale, New York, was moved by the image of Omran Daqneesh, which went viral last month. Sitting alone in the back of an ambulance covered in dust and blood, five-year-old Omran appeared to be in shock after his home on Aleppo, Syria, had been bombed.

When he saw the photo, Alex decided to write a letter to President Obama, asking if Omran could come live with him and his family in New York. "He will be our brother," he promised.

When the handwritten letter reached the President, he shared it on social media: We should all be more like Alex," he wrote. "Imagine what the world would look like if we were. Imagine the suffering we could ease and the lives we could save." See the full post and the moving video of Alex reading his letter below.

Alex is just six years old. He lives in Scarsdale, New York. Last month, like people around the world, he was moved by the heartbreaking images of Omran Daqneesh, a five-year-old boy in Aleppo, Syria, sitting in an ambulance, in shock as he tried to wipe the blood from his hands. So Alex sat down and wrote me a letter. This week at a United Nations summit on refugees, I shared Alex's moving words with the world. Alex told me that he wanted Omran to come live with him and his family. He wanted to share his bike, and teach him how to ride. He said his little sister would collect butterflies for him. "We can all play together," he wrote. "We will give him a family and he will be our brother." Those are the words of a six-year-old boy -- a young child who has not learned to be cynical or suspicious or fearful of other people because of where they come from, how they look, or how they pray. We should all be more like Alex. Imagine what the world would look like if we were. Imagine the suffering we could ease and the lives we could save. Listen to Alex, read his letter, and I think you'll understand why I shared it with the world. wh.gov/refugees