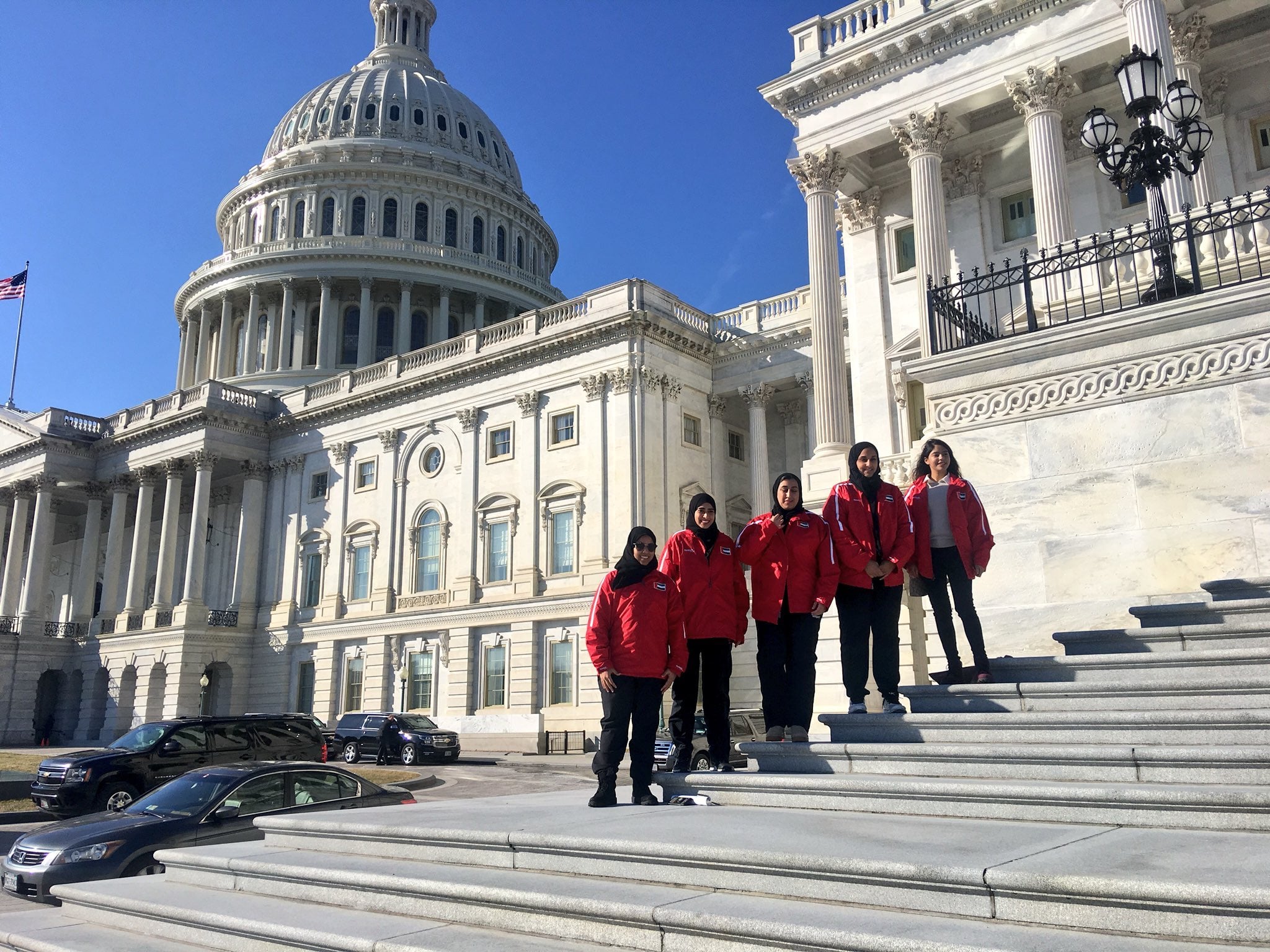 February is the NHL's "Hockey is For Everyone" month, and the US's National Hockey League runs a number of programs and initiatives that celebrate grassroots hockey as well as the sport's diversity around the world. This year, the UAE women's national hockey team is taking part.

Standing in front of nearly 20,000 fans at the Capital One Arena, Fatima Al Qubaisi, the captain of the UAE's ice hockey team, performed a ceremonial puck drop at a game between the Washington Capitals and the Columbus Blue Jackets.

The puck drop was just part of the team's visit to the US capital, and the team was invited to run drills with members of the Captials, and also watch the team practicing.

"Fatima and her teammates encapsulate exactly what Hockey is for Everyone is all about — encouraging people of all backgrounds to play hockey and use the sport as a catalyst to teach essential life skills and the core values of hockey: commitment, perseverance and teamwork," said Ted Leonsis, the owner of the Washington Capitals.

The visit was arranged by the UAE's embassy in Washington in conjunction with the NHL, and it's clear that their visit is making an impression on the pros.

"When I first found out that they were coming, I thought it was incredible," said defenceman Madison Bowey. "Me, being an African-Canadian player, it's obviously tough to get in the game and get involved, so I think the more diverse you see the game becoming, it's pretty special. To see these girls here from Abu Dhabi and how in love they are with the game and how much fun they have on the ice, it's really special."

Of course, a trip to Washington wouldn't be complete without a visit to some of the most historic sites in the US, and the girls were able to take a tour of the capital, and even meet with lawmakers.

After their trip overseas on @EtihadAirways, the United Arab Emirates Women’s National Hockey Team and @FatimaAl_Ali stop by the @uscapitol to meet with @SenatorDurbin - a member of the Congressional Hockey Caucus - and @PeterBondra12. #HockeyIsForEveryone #ALLCAPS pic.twitter.com/YVuP0aQC2a

The UAE team spoke about their excitement to meet with the pros, and even to scrimmage against the Washington Pride, a local women's hockey team.

"It's just like a dream that's come true," said goalie Fatima Karashi as she watched the players walk in. "We've been playing for eight years and we've played in some tournaments, but to see professionals right in front of us, it's actually more than I ever dreamed about."

Next the team is off to Ottawa and Chicago before they head back to Abu Dhabi to prepare for the Asia Cup, which takes place in March.