After going to school next door to the Imperial War Museum in London and just generally being born in a city with many cool cultural opportunities available in my free time, after the millionth field trip to any one of them, I've pretty much avoided spending time in the famous museums and art galleries in London in my adulthood.

Unfortunately, it extended into my trips abroad, as the thought of seeing one more dinosaur put the fear of boredom into me, and I've instead opted to frequent the cool nightlife scenes and traipse the streets for cool pictures on city breaks.

On a trip to Washington DC, I finally faced what I knew I'd been missing out on all these years and checked out the brilliant National Portrait gallery to see the former US Presidents' official portraits, the incredible National Museum of African American History and Culture, and even get a tour of the Pentagon – all of which I thoroughly enjoyed. But nothing made me feel as close to American history as staying at The Watergate Hotel.

It sounds familiar doesn't it? That's because the Watergate complex the hotel is based on is the same place the Watergate Scandal took place in 1972 when five men broke into the Democratic National Committee headquarters. As part of a whole cover-up about the Vietnam War, it led to then-President Nixon resigning after it was certain he'd end up being impeached. It's the reason why basically, anything scandal is suffixed by "-gate." When private pictures from celebrities' iClouds were leaked in 2014 – Celebrate. When Russell Brand left lewd messages on Andrew Sachs' answering machine – Sachsgate. Get it? Room 214 is where the original took place (now 205 after a revamp and reopening in 2016) and I was lucky enough to get a look-around the famous Scandal Room where Republicans listened in on conversations at the Democratic National Committee headquarters just opposite. Watch the final scene in Tom Hanks and Meryl Streep's The Post to get a similar view of what you see from the room. It was pretty surreal to know I was actually there.

Despite the room being a higher price than similar ones on the hotel, it's regularly booked for obvious reasons and to remind guests of the huge piece of history they're so close to, the room is decorated with memorabilia so you won't forget.

Newspapers with stories of his resignation (as well as coverage on subsequent movies like All the President's Men) line the entrance way, as well as framed quotes above the bed and by the desk. Of course, it's not exactly what the room looked like all those decades ago, rather it's brought to life a bit more with popping red on the record player containing 45 throwback tracks, a vintage-style typewriter, tape recorder and some handy binoculars.

Lyn Paolo, the costume designer for TV show Scandal created the look so it makes sense that the room also has episodes of the Kerry Washington fave to watch on its 48" flatscreen. It's such a cool piece of history that guests under 18 aren't allowed to stay there.

So it's no surprise that The Watergate Hotel attracts many big names visiting the US capital city to the neighborhood of Foggy Bottom. While I was there, Saudi Arabia's Prince Mohammed bin Salman was in town, and while he stayed in a compound, his delegation booked out rooms in the Watergate.

Home to some fabulous restaurants and bars (I highly recommend the whisky tasting at the Next Whisky Bar), it's also a hot spot, thanks to its underground spa, garden globes and the best rooftop views in the city. 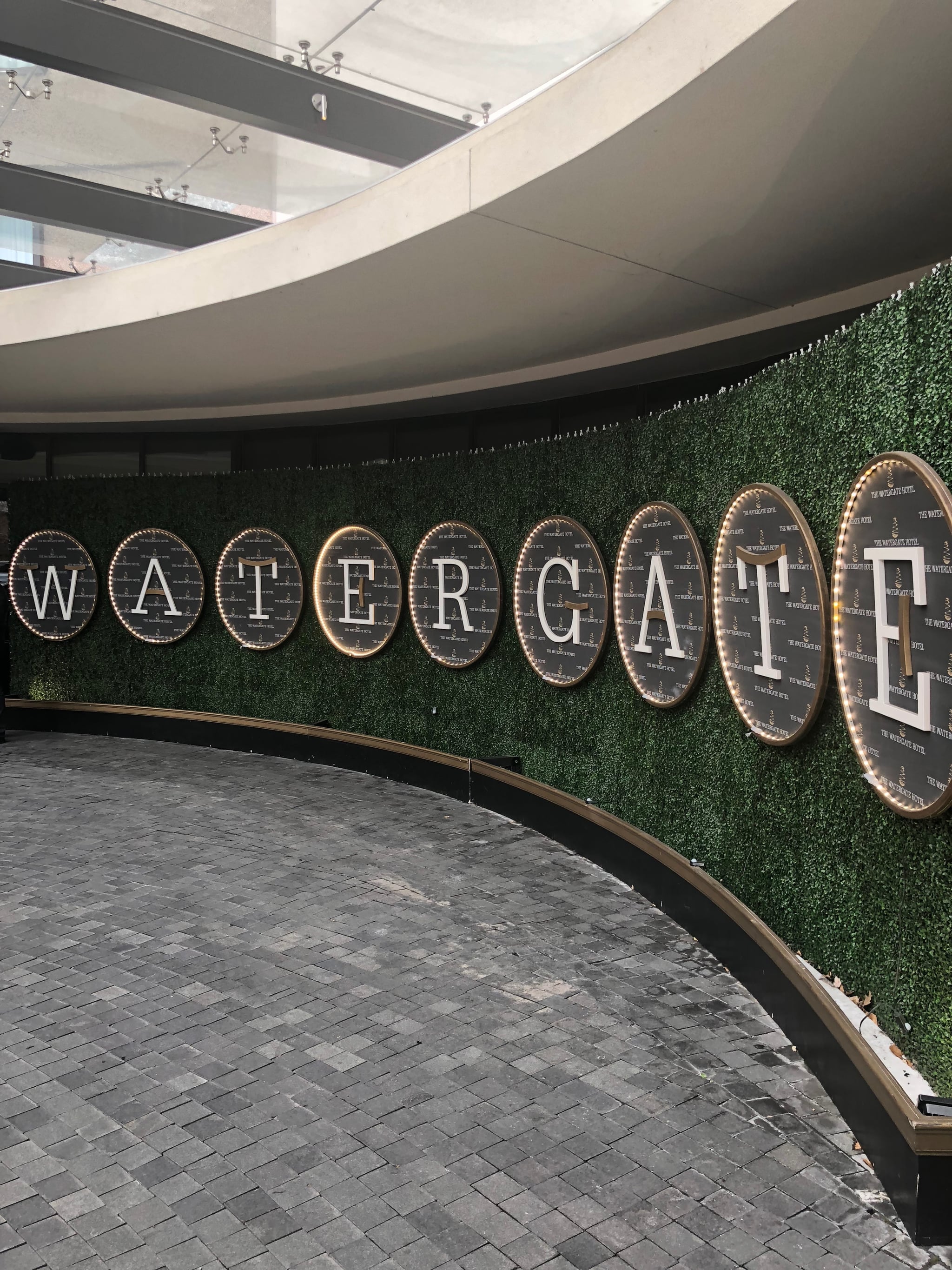 Travel and accommodations were provides by The Watergate Hotel for the purpose of writing this post.