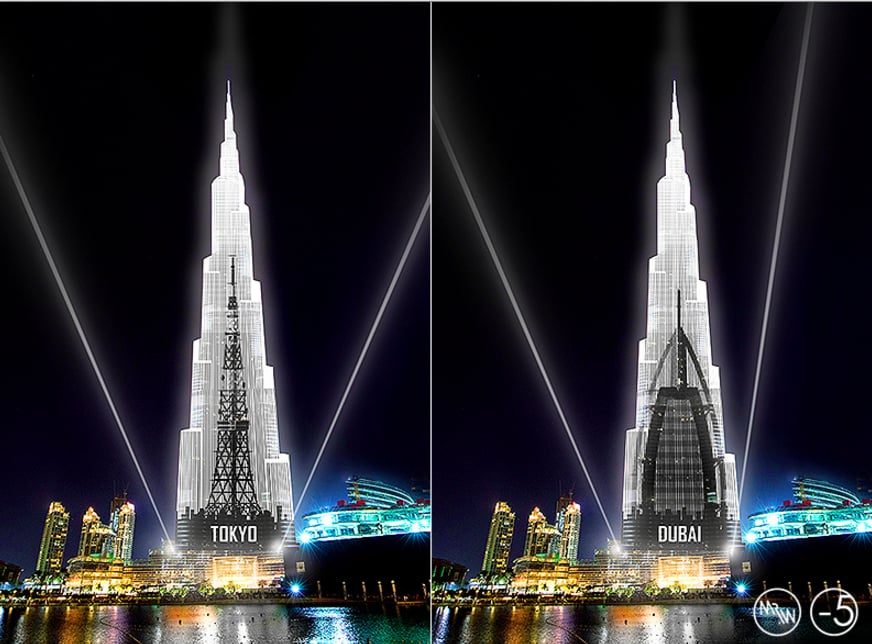 If you've ever experienced the Burj Khalifa up close, you'll know it's so big that after a while, its enormity can go unrecognized.

See any other stand-out towers around the world in their surroundings and it's also easy to forget what an incredible bit of architecture the Middle East has in the Burj.

But to show just how huge the world's tallest building is in comparison to other popular attractions around the globe, artists have put together images to help us remember how neck-craningly huge it is.

The impressions - from Minus5 Architects and Studio Mr. White with art direction from Daniel Georges and Hani Abyad - reveal exactly how the likes of Paris' Eiffel Tower and London's Gherkin size up to the Burj Khalifa.

While Dubai's tallest exceeds 800meters, the Great Pyramid of Giza in Egypt, Empire State Building in New York and the Taipei 101 in Taiwan don't quite match up.

The creators have proposed the images be displayed on the Burj Khalifa's record-breaking LED-illuminated facade, saying it "symbolizes the culmination of humanity's constant strive to build bolder architecture that pushes the progress of civilization".

"The silhouettes would scroll slowly giving the viewer for the first time the chance to see the real difference in height…" they write. "With this visual concept, Burj Khalifa elegantly shows admiration to all construction marvels while reasserting its position as the 'big brother' tallest building in the world."

It's something we'd love to see and think the rest of the world would agree!