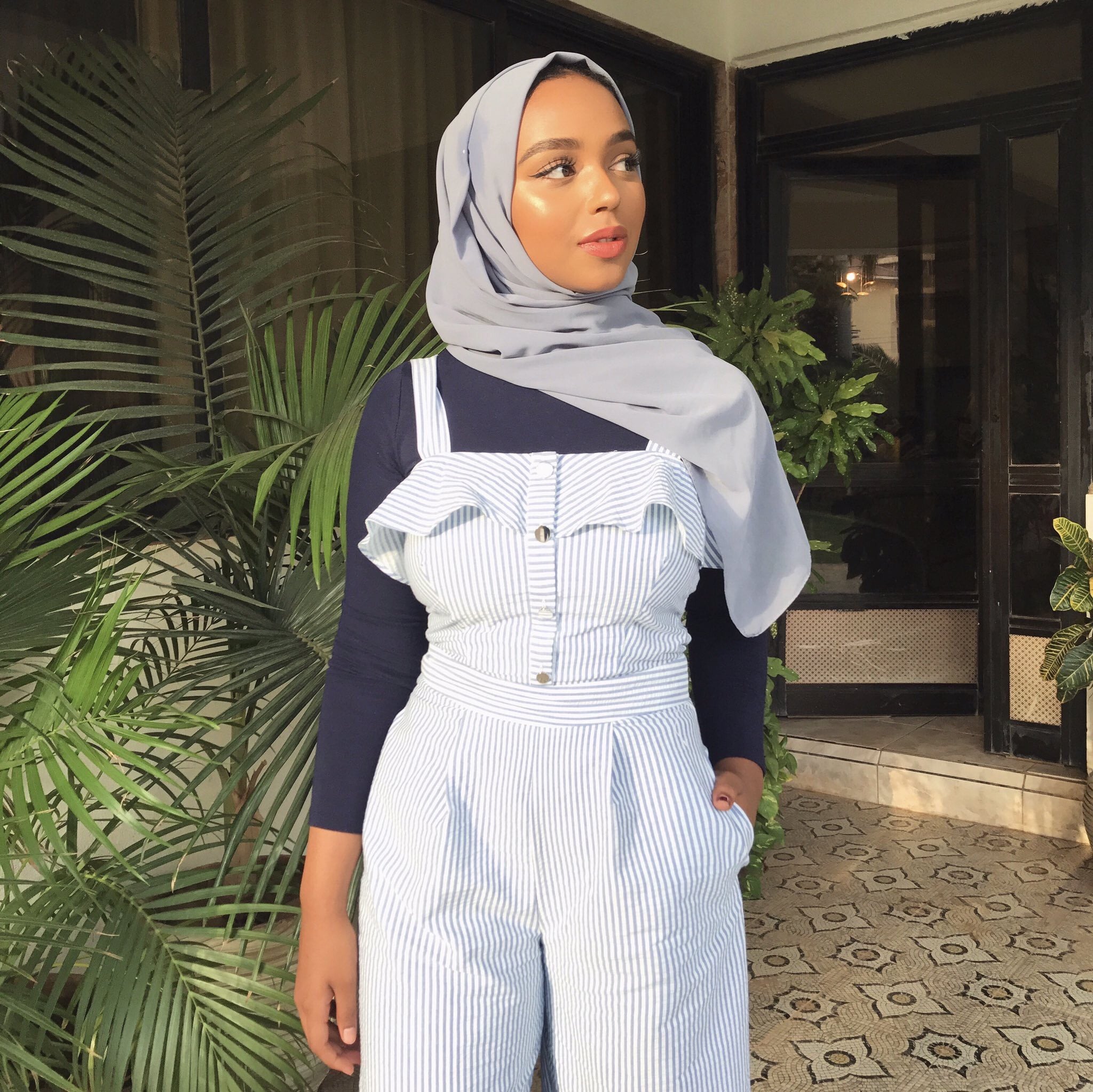 Eight months ago, I woke up one day and decided to start wearing the hijab. I understood that the decision would inevitably affect almost every aspect of my life — but I didn't care. I told my family that I was "just practicing," but in the back of my mind, I knew I would not be taking it off. I was making natural-hair videos on my YouTube channel at the time of my decision, so my choice came as a shock to many of the people who watch me. But it is a choice that I have never once regretted. Wearing the hijab and committing to the lifestyle that goes along with it is something I've always wanted for myself but never imagined it coming so soon.

At 21, wearing the hijab was a huge step I took entirely for myself, but one I had to mindfully maneuver in front of the entire world.

It's different when you live in the Western world. People stare, stores don't cater to modest dressing, and I constantly have to explain that, no, I don't shower with the scarf on my head. It means being persistent and strong in my beliefs. I shouldn't have to go out of my way to make you feel comfortable that I'm not a terrorist. Islam literally means peace, but TV shows, movies, and even news coverage rarely show that, hence why these stereotypes are created. At 21, wearing the hijab was a huge step I took entirely for myself, but one I had to mindfully maneuver in front of the entire world.

I made this choice just after the presidential election, which hit me hard. Though it was a change I'd been thinking of making for some time, Donald Trump's victory was just the push I needed. It was a conscious choice to combat the hateful rhetoric of Trump and anti-Muslim sentiment. I would hear stories of young women taking off the hijab out of fear every day. We hear the hate-crime stories and, unfortunately, hijabi women are common victims. And while I'm proud to wear the hijab, I've noticed the way it changes how some people view me and treat me. Just a couple weeks ago, I was told to take off my hijab by LaGuardia airport security. It was hard not to wonder if the question was asked out of ignorance or if this woman was abusing her power because she finally felt she could.

For me, wearing the hijab has been the most liberating experience. It is a reminder every single moment that I am a Muslim and that my actions should reflect that. It's changed the way I speak and interact with people. I've learned more about myself in the past few months than I have in my entire life. It feels crazy to say, but it's really put things in perspective and helped me to realize what is actually important to me. I fall more in love with myself as I fall more in love with the hijab. It's the greatest feeling when women come to me for advice or tell me how I've inspired them to start wearing the hijab. Or even women who've been wearing the hijab for years telling me that they're excited all over again — it's the greatest reward.

By wearing the hijab, I reject your ability to objectify, sexualize, or body shame me.

That's why representation is needed now more than ever. There need to be more Muslim women in the public eye. Take model Halima Aden, for instance: her success has influenced young Muslims across the world while also showing the public an accurate, positive depiction of a Muslim woman. Not to explain how the hijab is not a form of oppression, but to show it. If people took the time to understand that the hijab is not just a headscarf but really learned about the values and philosophy behind it, there wouldn't be such a divide. By wearing the hijab, I reject your ability to objectify, sexualize, or body shame me; I reject the pressures of society telling me I need plastic surgery or Botox. Rather, see me for my ideas, my character, what's inside my brain. Aden told Allure: "I have much more to offer than my physical appearance, and a hijab protects me against 'You're too skinny, You're too thick, Look at her hips, Look at her thigh gap.' I don't have to worry about that. Society puts so much pressure on girls to look a certain way." Halima depicts perfectly how most hijabis feel: that their hijab is simply an extension of their beliefs, strength, and grace as a Muslim woman.

Though representation is extremely important to me, and I'm proud to wear the hijab, I don't want to be solely defined as a "hijabi vlogger." "Hijabi" is not the first word I would use to describe myself, therefore it's not how I'd like to be defined. I recently sat down with a few other bloggers who felt the same as me. Some felt as though it's important to have the word "hijabi" in the title of their YouTube channels, blogs, or Instagram accounts. Others, like me, felt it extremely unnecessary. While I respect and celebrate other women who do choose to make their hijabi identity a key part of their videos, for me, it feels as though I'm being placed in a totally different category when the "hijabi" title comes up. The reality is that we're normal people who love what we do and want to share our passion with our audiences.

It's a huge step for hijabis to be noticed and celebrated in the media, and I'm both proud and honored to be witnessing this progress. But, please, remember that the hijab does not define us. I'm more than willing to shed light on why I wear the hijab to anyone who asks with genuine respect. A question I am always asked is, "What is it like to wear the hijab in the US?," and I'm always tempted to respond with something like, "How does it feel to brush your teeth in the morning?" You don't think twice about it. It's a part of my routine like it is a part of me. I can't speak for everyone, but the hijab has quickly become second nature to me, and I can't imagine leaving my home without it.