On Christmas morning, 1996, I opened the gift that would change my life forever: a Nintendo 64 gaming system, which came with the iconic Super Mario 64. Then, on March 8, 1997, I received Mario Kart 64, for my seventh birthday (while sporting a Goosebumps t-shirt and some seriously awful home-cut bangs — see horrendous photo below as proof). Both occasions are ones I remember well and fondly, and as a grown up Nintendo-lover who still plays Mario Kart weekly, they are moments in time that make me really nostalgic for the 90s and all the times I had playing Nintendo both alone and with friends or cousins.

Steve Bassoli, who has become an internet sensation basically overnight thanks to a 1988 home video he posted to YouTube of himself receiving a Nintendo as a child, surely understands this feeling of nostalgia well. Having found the 29-year-old footage after all this time, Steve decided to share the video in a small sub-Reddit in late November. After posting it to a larger sub-Reddit following the advice of his brother, Kyle — who is also featured in the old video, but isn't nearly as emotional or enthused as Steve — the video went completely viral, garnering over 1 million views in just about a day.

Steve said in an interview with a local news station in Connecticut that though he was very embarrassed upon uploading the video, he got a lot of positivity from people on the internet (because who doesn't love an '80s throwback?!). 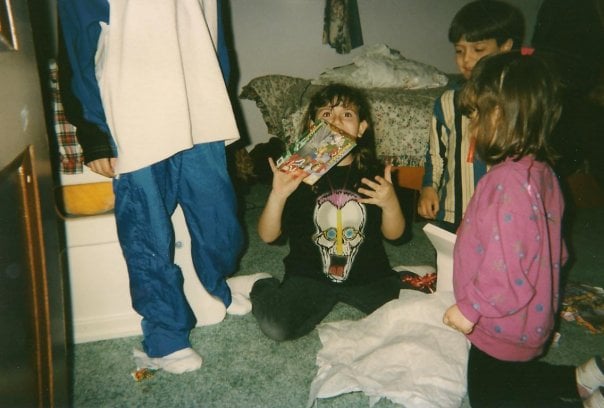 Fall Fashion 2020
Kendall and Bella Just Reminded Us: No One Makes a Minidress Like Donatella Versace
by Sarah Wasilak 22/2/20

Celebrity Style
Tell Me It's 1995, Because That's the Decade Dua Lipa's Outfit Is From
by Sarah Wasilak 27/1/20
Latest Family