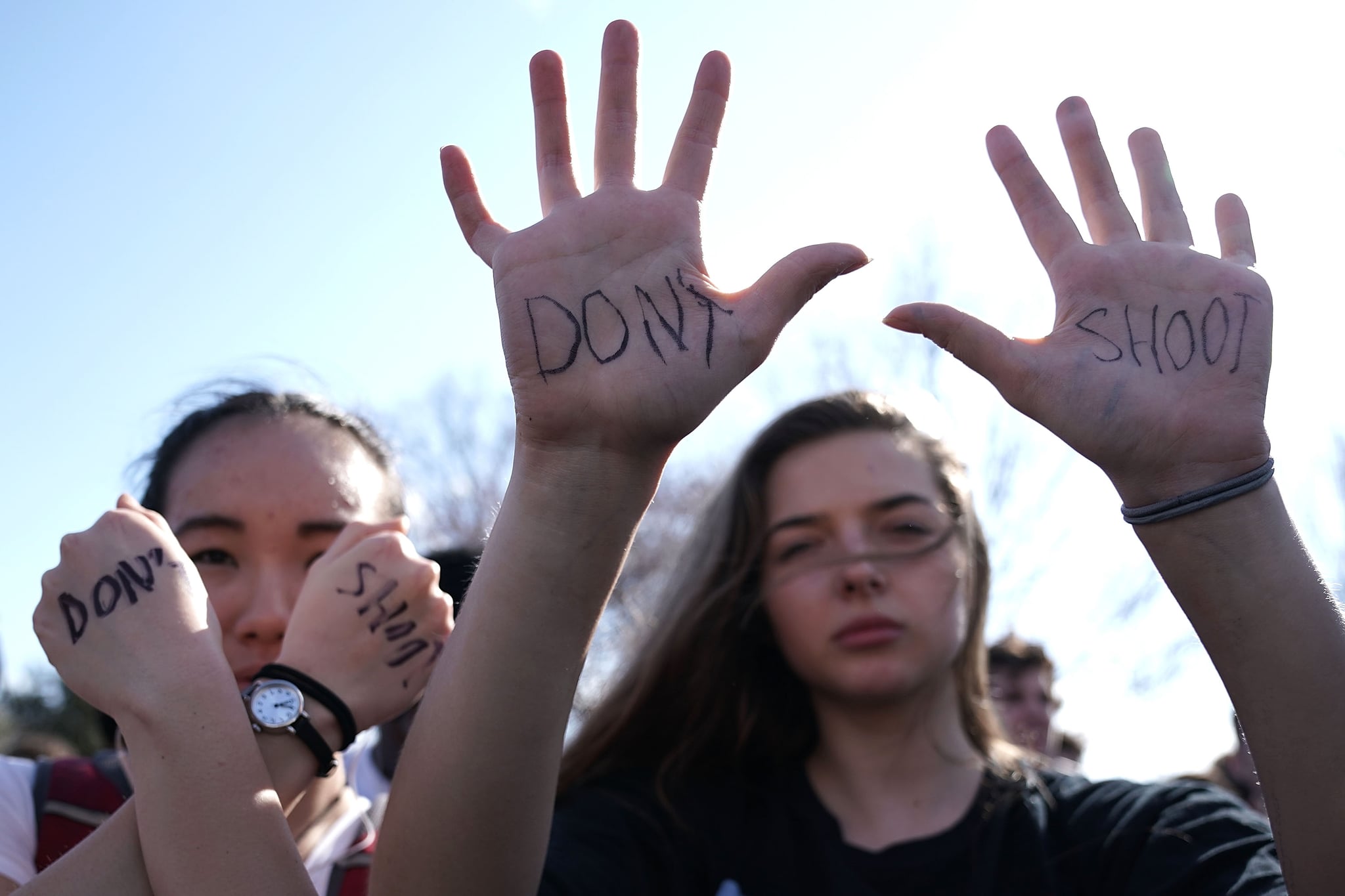 With the Feb. 14 Parkland school shooting aftermath still making headlines, more and more parents are becoming concerned with how to bring up the heavy topic of gun violence with their kids. With the Enough! National School Walkout scheduled to take place at 10:00 a.m. across every timezone in America on March 14, and the March For Our Lives event coming up on March 24, it's also important to be talking to children about peaceful protesting and raising their voices for a cause they support.

Ashley Virtue, Director of External Relations at the National Conflict Resolution Center, gave us advice for addressing gun violence and peaceful protesting with our own kids in a positive way. Although talking to your child — whether they're in elementary school or a teenager — about walkouts or school lockdown drills aren't easy conversations, these tips will help make these talks less intimidating.

1. Be the one to bring up the conversation, and control your emotions around your children and teens.

Kids, especially teens, are going to hear about the news revolving gun violence and school shootings on social media and from their friends and teachers, so being the one to bring up the conversation ensures you're able to control the environment and make the conversation positive.

"Especially with something like this that is so in the news . . . everyone's talking about it, it would be naive to think they're not going to hear about it," Ashely told POPSUGAR. "The concern about not wanting them to be more afraid is so valid and such a good thought for parents to have, but understand that communication can be your biggest strength and could create a stronger, more positive environment around this topic. If you're hitting the issue head-on, you could actually make your child feel a lot safer about it, rather than more scared."

2. Talk about the Parkland shooting head-on, and be direct about what happened and how people are responding.

Even before the Parkland shooting, most schools were periodically practicing active shooter drills to help kids prepare for a potential lockdown situation. However, not all kids know exactly what those drills are for, depending on their age. With those young children, ask them what their teachers tell them about why they do lockdown drills and how those conversations make them feel, as this will give you insight as to what, if anything, they need from you to feel safe and informed.

"If you're hitting the issue head-on, you could actually make your child feel a lot safer about it, rather than more scared."

For older children, Ashley says talking directly with them is the best way forward. "You need to be the strong one in this conversation and let your kids know that they're going to be OK and there are things they can do to hopefully make them safer, and that their teachers are prepared for something like this, even though you hope it doesn't happen."

3. Encourage your child to express their feelings by asking open-ended questions.

After doing your best to reassure your children, Ashley says to "really allow them safe space to express what's going on in their heads and how they feel about everything." It's really important to ask open-ended questions to get more than a "yes," "no," or "fine" from them.

"A lot of parents kind of check the box of 'I asked them if they were OK and they said they were,' but kids are relying on us to prod a little bit more than that," Ashley said. "Getting to some of their underlying feelings about this is really important, and parents need to invest the time in seeking out those answers from their kids."

4. Involve your kids in making a family safety plan and discussing peaceful protesting.

"With any conflict or difficult conversation, once you have the opportunity to express how you're feeling about something, turn the conversation toward something positive."

Following the conversation with your child, turn them toward positive action. "Ask your kids, 'So what can we do about it?' . . . This gives your kids a feeling of empowerment instead of them feeling like there's no control." This could involve creating a family plan in which you and your child make decisions about what to do and who to contact if there's an emergency, and where to meet you following an emergency situation at their school. For kids of all ages, but likely more so the older set, a peaceful protest or a school walkout will also inspire some of that solutions-based empowerment.

"If your child feels like they don't have control and wonder, "What if an active shooter comes into my school?" this is something that a lot of kids feel like they can do," she said. "If you feel comfortable as a parent letting them participate [in a walkout or protest], allowing them to do that could be a really healthy thing. I would really encourage families to do a protest as a family activity because you will still have some control over what your kids are seeing and experiencing. A protest or walkout in and of itself could be a scary thing, especially if they've never done it before, so be part of that with them and have a lot of open dialogue within your family about why they're doing it, what the purpose is, and what they hope to get from it."

5. Don't avoid these big conversations with your child just because you're pro-gun.

Even if you happen to be pro-gun, it's still your responsibility as a parent to open a dialogue with your kids to allow them the same safe space to talk about their feelings as if you were anti-gun. On the other end of the spectrum, you may be a pro-gun parent with a child who disagrees with your opinion and wishes to express their right to peacefully protest. Rather than telling them they can't simply because you wouldn't choose to yourself, Ashley says to consider their side.

It's so important with teenagers who are becoming independent thinkers and who are creating their own values and belief systems that you have dialogue with them, especially when you disagree on things. There's absolutely a time and a place for parents to say, "This is a safety issue; I'm your mom and I say no; you have to listen." But when it's something like this . . . if you fall on a different side of things than they do, you can sit down and absolutely express to them how you feel and why — but you have to be able to hear them say why they feel the way they do as well.

Here are some things a pro-gun parent with a child who is anti-gun and wants to participate in a walkout or peaceful protest can say during these conversations:

"If you give them the opportunity to talk, it's not that you can completely convince them to come over to your side," Ashley said, "but you may open their eyes to at least understanding some of why you come from that point of view and maybe you can find some common ground."