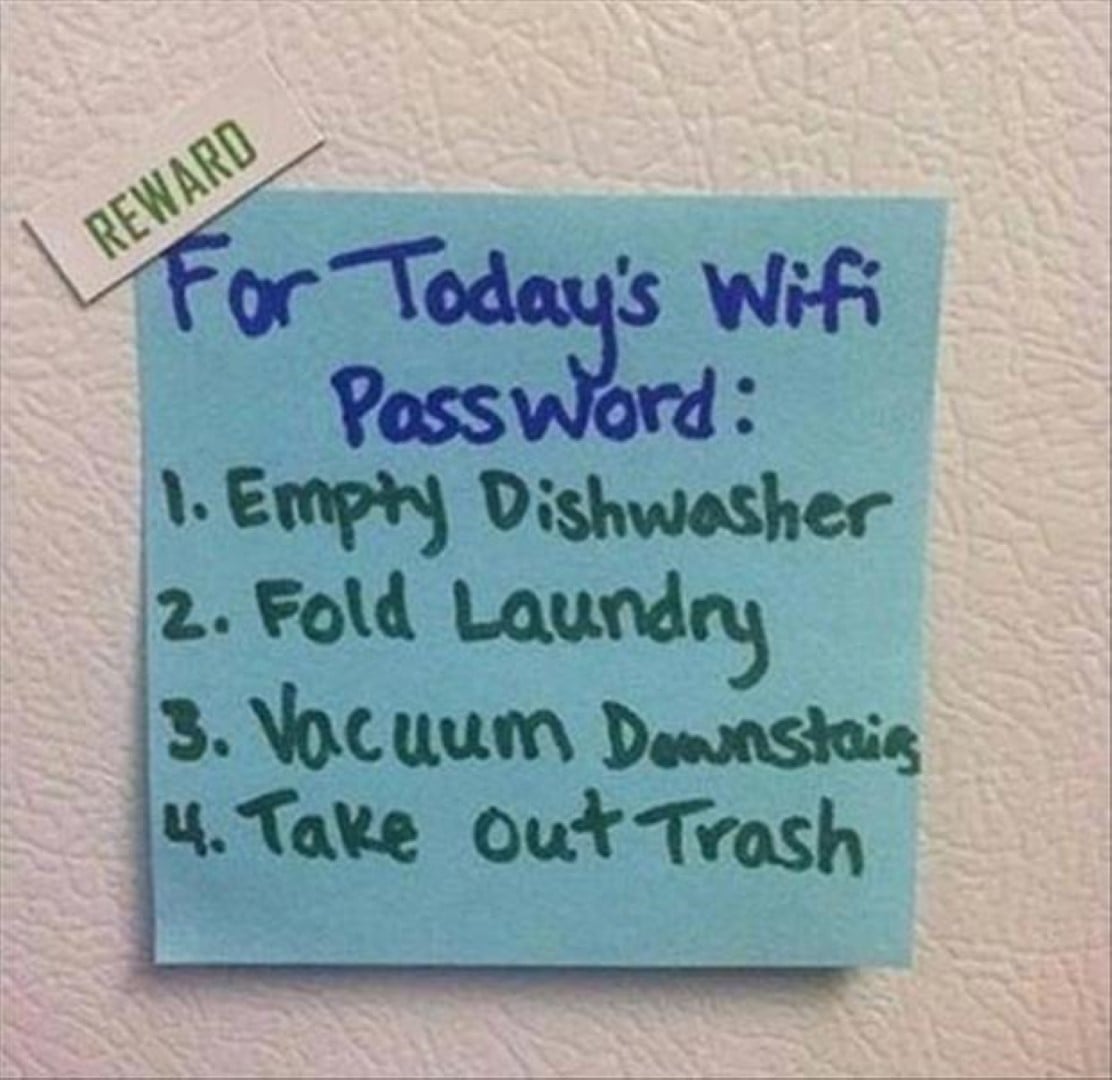 Parenting is beautiful, it's fun, and it's one of the best gifts in the world — it's also difficult, emotionally trying, and sometimes just downright overwhelming. They say that sometimes you need to laugh so you don't cry, so we've rounded up 30 parenting gold nuggets to help you laugh through it with these other moms and dads who have totally resigned to humor instead of tears.

1. This dad who was left alone with his son for five minutes.

2. This dad who was supposed to keep the baby up so she'd sleep through the night.

Pretty much the best use of googly eyes ever.

3. This mom who doesn't want to interupt her son's REM cycle.

4. These parents who gave this epic teacher's gift.

5. This dad who used his handyman skills to build his newborn a shark bed.

What do you mean he won't fall asleep in his new crib?

6. These parents that figured out the best way to tell their identical twins apart.

7. This dad who came up with the best solution to get his kids to do chores.

8. This dad who believes that everyone should eat — erm, drink — at the same time.

9. This dad who need only turn to his lock screen for a good laugh.

10. This dad who has figured out how to keep all of the little animals in his house busy.

11. This celebrity dad who understands that not everything his child does is amazing.

My daughter's only 6 months old and already drawing. I'd hang it on the fridge but honestly, it's absolute garbage.

12. This dad who just really wants some cake.

When you don't want to wake your daughter, but you DO want cake. [Via Imgur]

13. This mom who isn't going to lie about taking shortcuts with hacks.

14. These parents who probably make every mundane task a hoot.

16. This mom who is willing to understand that things change.

17. This dad who would never take out his frustration on his kids but isn't scared to admit he's totally PO'd.

18. This mom who isn't going to push — she knows that kids are ridiculous.

6yo: I feel like I turned this house upside down looking for my shoes. Translation: I wandered from room to room, moved nothing, glanced around, and then declared they were lost forever.

Posted by Perfection Pending by Meredith Ethington on Monday, July 13, 2015

19. This dad who isn't letting his daughter date until she's 40.

20. These PTA parents who want to give their fellow parents a break.

21. This mom who nailed her daughter's first-day-of-kindergarten photo shoot.

And that's how Doc McStuffins made it to the "Do Not Watch" list.

23. The dad who came up with these balloon art designs.

24. This mom who allows irony to thrive.

Highway to Hell was playing as we took off on our road trip. Seems fitting.

25. This parent who wants to warn other drivers that she may be a bit loud while her child learns to drive.

26. This mom who is having trouble finding the right chapter in What to Expect When You're Expecting.

Husband said the f-word when driving yesterday, which our son quickly (and clearly) repeated...but I can't find that page in the baby book

27. This parent who understands the value of letting a toddler teach herself crucial skills.

28. These parents who just want to be paid rent.

Little Lacy is so not ok with this situation. Thanks to Kendy for the picture!

29. These parents who are sharing the value of hard work with their kids.

30. This dad who wanted to teach his son manners.

Parenting Tips and Advice
I Stopped Punishing My Toddler's "Bad" Behavior, and the Transformation Shocked Me
by Angela Elias 20/10/19
Latest Family